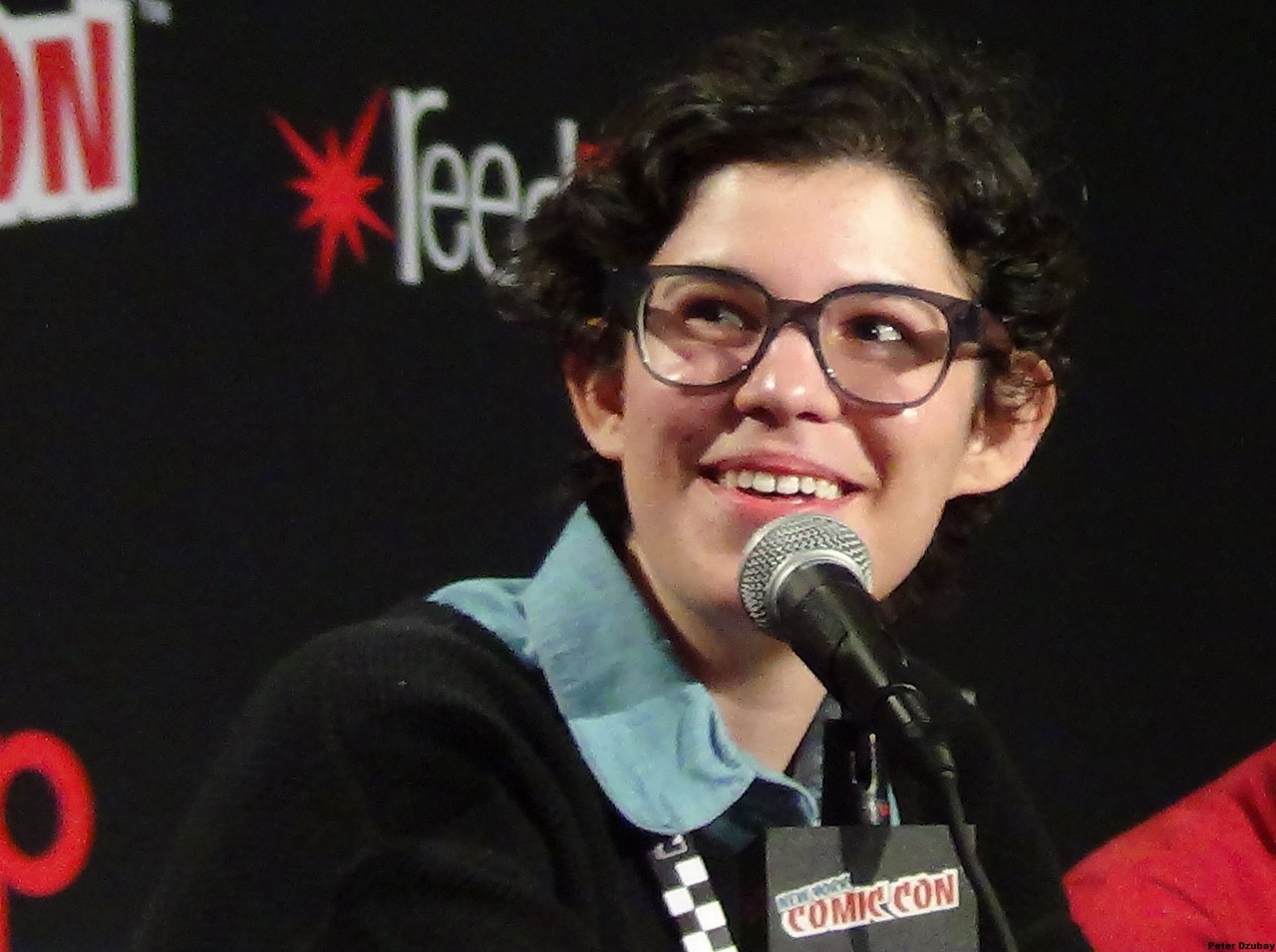 Rebecca Sugar at Comic Con 2014.Peter DzubayHeroes come in all shapes and sizes. Someone that inspires me and makes me believe that anything is possible, is Rebecca Sugar. Why is this person so special? What makes them a hero? Rebecca Sugar is a Queer creator, who goes by the pronouns they/them and she/her. You might recognize that name due to the many shows and movies Sugar has been a part of, or even heard a song or two written by her. “Steven Universe” is a prime example of her career in children's television. They have also worked on popular shows and movies such as “Adventure time” and “Hotel Transylvania.'' Though “Steven Universe'', opened up a whole new world of possibilities. Representing more minorities, bringing in a more diverse audience.  The show was first aired on Cartoon Network in 2013. Which would roughly air till early 2019. Then a movie and show called “Steven Universe Future '' aired. Each one leaving, its mark on the world. How did it get to this point? Rebecca Sugar is a hero because they faced criticism by acknowledging topics that others wouldn’t, the impact her creation left and has made others feel accepted for who they are. They did something that truly changed the world of children's television. Though, how did it get to this point?

Rebecca Sugar got a lot of criticism due to the topics that were explored in “Steven Universe''. Such as trauma, toxic relationships, grief and the LGBTQ+ community, as well as many other topics. "The idea that children's programming can contain a wider spectrum of ideas and characters and stories, I think Rebecca Sugar broke that open and changed that forever'' (Brown, Newsela). Sugar’s decision to incorporate characters of the LGBTQ+, comes from real life experiences. They have experienced homophobia and the trauma that comes with it. They shared a story about them and their partner. When one time they had been harassed because they looked like a gay couple. At the time Sugar had short hair, since they identified as non-bionary. They wanted to push their ideas, they knew it wasn’t going to be easy, and received much push back. Knowing this, Rebecca Sugar knew she wanted to create a safe space for those communities. Whether they enjoy the show or feel accepted. The risk of the show being canceled in other countries, worried Sugar dearly. So in order to keep the show airing as long as possible, Sugar tried to navigate around questions based on the theme surrounding the LGBTQ+. Till finally she had enough and came out bisexual herself. In doing so it proved she had an understanding of the topics and why they were so important to speak up about.

Due to Sugar holding strong with her beliefs and pushing for this show to come alive on screen, she was able to make her dream come true. The story of “Steven Universe '' follows a young boy named Steven who looks up to a group of gem warriors, called the Crystal Gems. Yes, gems, as in rocks. Biologically the gems are neither male or female, making them non-binary. However they go by she/her pronouns. Which is also another groundbreaking idea for society. Showing that young males can follow a group of strong people, regardless of their sex or how they look. Which is something I admire about the show. Sugar left an impact that will stay with me and the rest of her community forever. This is where “Steven Universe'' does something groundbreaking. They introduce the special character Garnet. Garnet is a fusion made of two gems. Ruby and Sapphire. They come together to form Garnet. Garnet is essentially three people together. Separate minds, yet they have the same mind. Garnet is her own being as well as Ruby and Sapphire. This is unusual because gems only fuse when they need more power and they only fuse with their same type of gem. Garnet is made from two gems that are together, simply because they want to be. It is a fusion made from love. Later in the show the two get married, featuring a kiss shared between the two. This happened due to Sugar persistently trying to get the company to air the episode. Originally, any kiss that could be between two people of the same gender was prohibited, it would only premiere for comedy sake and not for love. “ That’s when I first started coming face to face with the limitations that existed on what we could do”  (Sugar, Romano). Why is this relationship so important? It’s the first same-sex relationship to be one of the main focuses ever in the history of a Cartoon Network series. “Ruby and Sapphire's nuptials were the first same-sex wedding featured in a Cartoon Network series — complete with a kiss. It changed everything” (Tracy Brown, Newsela). It is for this reason that other Cartoon Network shows began to allow whatever a heteronormative couple could do, a queer couple could do as well. 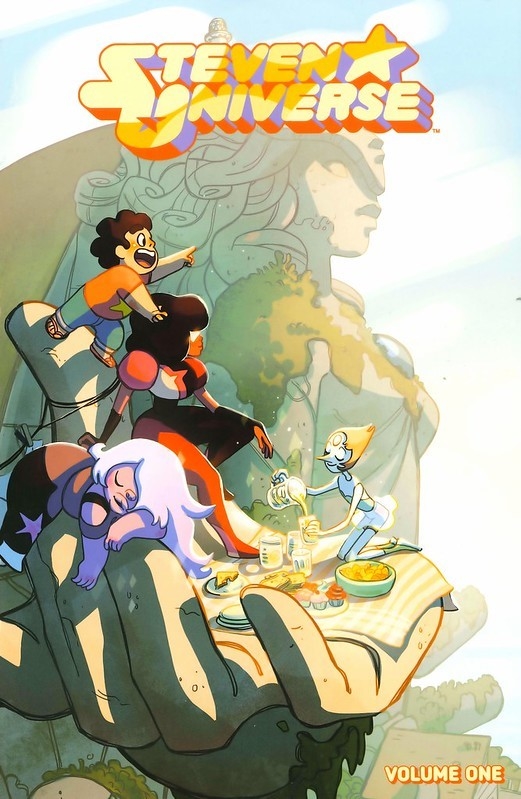 Characters from Steven Universe. Vernon Barford School LibraryI’ll be open to this to those who read this article. I am a part of the LGBTQ+ community. Of course this show aired sometime before I was out. It was a confusing time for me, at the time I was told that this was wrong and that I shouldn’t watch this show. I’m glad I did because now that I am older, I can understand and appreciate the contents of this show. It is comforting to know that there is a place where I am represented. Sugar’s creation did what it was supposed to do, by making it a safe space for people of those communities. “When Sugar came out, a lot of people who were struggling with their sexuality had someone to look up to” (Kat Knight, Medium). “Steven Universe is a show that is going to open doors to having more diverse shows. That is a big step in how we can be more accepting of others. “Rebecca Sugar influences a lot of different communities and has helped millions of people recognize how special it is to be alive with a family and she lets us explore who we want to be through her work” (Kat Knight, Medium). In fact, a spin off  of another show was created exploring the relationship between another same sex couple. Of course Rebecca Sugar was a part of this creation.

Given all the things Sugar has accomplished in her work, I think they deserve the title of hero. It’s not easy to face critics about the topics of the show, knowing the impact or making  people feel like they belong. The community that Sugar has carefully crafted, is still going strong. “Sugar is held up as a beacon of progress…” (Yomi Adegoke, Guardian). We recognize what a true gem they are and their work. It is a phenomenal show to watch and I highly recommend it. Without Sugar’s work, I don’t think I would be the person I am today. I am very thankful to Sugar and hopefully this inspires you.

‌ Rude, Mey. “How This Nonbinary Woman Created the Queerest Cartoon on Television.” Them., 2 Aug. 2018, www.them.us/story/rebecca-sugar-steven-universe-interview.