Relief from the fields: Tackling food waste, hunger in one swoop 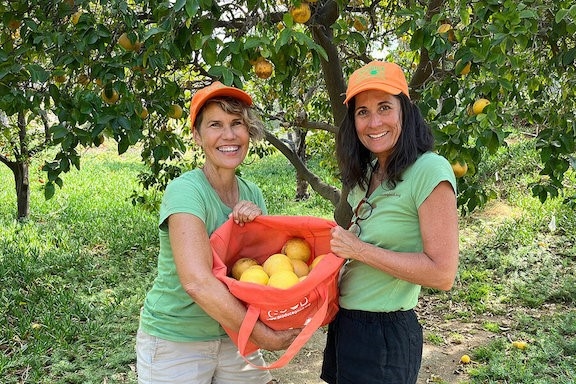 Nita Kurmins Gilson (left) and Alexandra White, co-executive directors of the gleaning nonprofit ProduceGood, show a sample of the morning's efforts at the property of John and Carolyn Melka in Bonsall, California, July 27, 2022. Ms. Kurmins Gilson and Ms. White want to spread "the gospel of glean" as a way to simultaneously tackle excess food and hunger. Francine Kiefer/The Christian Science Monitor

A drive through hills and vineyards of northern San Diego County leads to a community built especially for equestrians. Paddocks dot the generously sized lots and so do citrus trees, lots of them, with ripe grapefruit waiting to be picked and no one to harvest them.

That’s what brings a small band of volunteer gleaners to the home of John and Carolyn Melka, who have more than 90 grapefruit trees on their hillside property. At the top of their driveway, Nita Kurmins Gilson is giving a brief tutorial to the volunteers, starting with an explanation of gleaning. “Most people ... think we’re saying ‘cleaning,’” she says. But the word refers to the ancient practice of farmers leaving the four corners of their fields unpicked for widows and orphans – the most famous gleaner being the biblical widow Ruth.

Gathering excess and distributing it to those in need, that’s the purpose of ProduceGood, the nonprofit led by Ms. Kurmins Gilson and co-Executive Director Alexandra White. On this morning, the efforts of their four volunteers – two retired teachers and two college students – will multiply into 700 pounds of grapefruit that will help feed people experiencing food insecurity at a nearby charity. The volunteers are part of ProduceGood’s vast network of cooperation that relies on thousands of volunteers helping hundreds of local growers get fresh fruit to food relief agencies throughout San Diego County. Ms. White estimates that ProduceGood feeds about 90,000 people a year 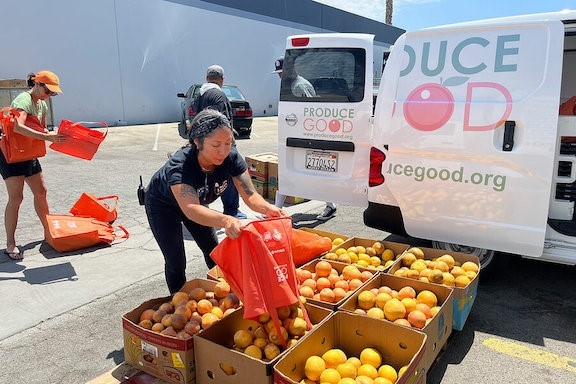 “We’re trying to reduce food waste and hunger at the same time while building community,” says Ms. Kurmins Gilson – pointing out that as much as 40% of all food in America is wasted, while nutrition insecurity in San Diego County increased from 1 in 4 to 1 in 3 people during the pandemic. She underscores the unity of purpose and cooperation among all the many people and organizations involved. “We could never do this by ourselves.”

Though data is hard to nail down because of the grassroots nature of gleaning, it’s “definitely on the rise” in the United States, says Laurie Beyranevand, director of the Center for Agriculture and Food Systems at Vermont Law and Graduate School in South Royalton, Vermont. “With all the increased attention by government on food-and-nutrition insecurity and food waste, people have become increasingly interested in gleaning as a way to resolve this issue.” A bonus is that it “builds community,” she says, connecting residents with farmers and turning volunteerism into a recreational activity. The Association of Gleaning Organizations counts more than 200 groups doing this work in the U.S.

Like the ubiquitous citrus trees of San Diego County, ProduceGood started from a seed. Ms. Kurmins Gilson recalls her teenage daughter despairing over dismal statistics about the environment. Her daughter was only 14 and had already given up on the world, but this mother was not ready to abandon hope. She impressed upon her daughter that one person, taking one step, could make a difference.

Ms. Kurmins Gilson, who had long been disturbed by fruit rotting on the ground wherever she looked, took that first step in 2009. She went to the local grocery store, picked up boxes on a Friday night, gleaned with friends in someone’s yard the next morning, and then drove the fruit to a food bank before it closed at noon. The casual gleaning turned into something much bigger, and in 2014, she and a mother-daughter team – Jeri and Alex White – created the 501(c)(3), ProduceGood. Now they could get grants. “From that point, it’s been like a rocket ship,” she says.

The pandemic proved pivotal. With restaurants and workplaces shuttered, farmers had no place to take their produce. At the same time, people were home, looking for things to do and ways to be outdoors. Meanwhile, food insecurity escalated. ProduceGood responded, filling a point-to-point need of getting fresh produce directly to people who needed it – including a pop-up food table in a heavily hit neighborhood in San Diego.

The nonprofit has expanded its definition of gleaning to food recovery. Volunteers gather up unsold leftovers at three farmers markets every week and pick up bumper crops from growers – providing participating farmers with a tax deduction. They’re also working with local grocers. For instance, they may go through a bag of a dozen oranges, remove the one moldy one, and save the rest. Otherwise, the entire bag would be tossed. 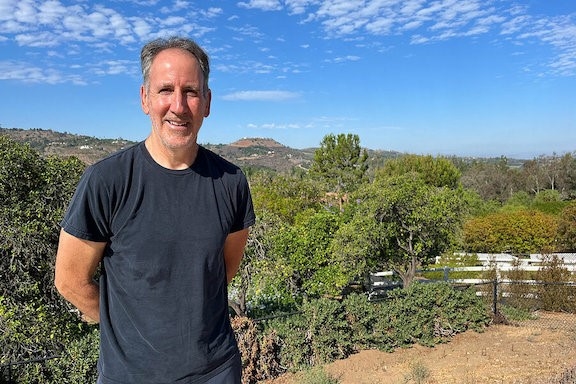 Francine Kiefer/The Christian Science MonitorJohn Melka stands in front of grapefruit trees at his residence in Bonsall, California, July 27, 2022. Most of the citrus trees on his 2 1/2 acres are grapefruit, and on this day, volunteer gleaners for the nonprofit ProduceGood collected 700 pounds of them to give to a local charity. Were it not for the volunteers, the fruit would be thrown out by gardeners. He and his wife, Carolyn, "love that it goes to help feed people," says Mr. Melka.

It’s a win, too, for the volunteers, who can be church groups, students, and corporate employees donating a service day. Debbie Dahlquist, a retired fifth grade teacher from Oceanside, is a “pick boss” for ProduceGood, which now has about 3,500 volunteers in its database. Clippers in her back pocket, a large straw hat on her head, she reaches her pick pole high into one of Mr. Melka’s grapefruit trees. She taught environmental science and ran the recycling program at school. “My passions are waste reduction ... and being outdoors.”

But perhaps nobody is happier than Monica Reyes, food-rescue manager for the Brother Benno Foundation in Oceanside – just 10 miles from Mr. Melka’s place. By noon, she and her colleagues had unloaded the grapefruit. It will be put to immediate use for their guests, she says, available at their free, hot breakfasts; in sack lunches; and at their distribution center next door. People who live in their cars come in on delivery day and grab some to store in their vehicles to help them stay hydrated.

“It’s really important to us to make sure that fresh produce is available because it’s really scarce among the unhoused and low-income community,” she says. “None of it goes to waste.”

ProduceGood estimates it leaves behind 15 million pounds a year at its glean sites. The organization would like to keep growing, but it’s a matter of capacity and funds.

They have grants from the state, county, and foundations; corporations and individuals also donate to support the staff of five and other operating costs. Three cities, including Oceanside, have also contracted with them to help implement California’s new organic recycling law, which mandates diversion of organics from landfills in order to reduce greenhouse gases.

“It’s the wave of the future,” says ProduceGood’s Ms. White, about the recycling law, which adds a climate change element to their work.

Colleen Foster, who is Oceanside’s environmental officer, says that 15 years ago, the city’s waste department only had disposal and recycling. “Today, our program includes gleaning services with ProduceGood.” Residents can call the city to schedule a pick. It’s a triple win: collecting excess, getting it to hungry people, and reducing greenhouse gases. “The residents love it.”