Climate change is is a threat for coastal cities. But some researchers see an opportunity to revitalize and rebrand northern communities.

OCTOBER 16 2019 - DULUTH, MINN. - Before the advent of air conditioning, this northern U.S. city on the shore of Lake Superior promoted itself as a cool summer haven. 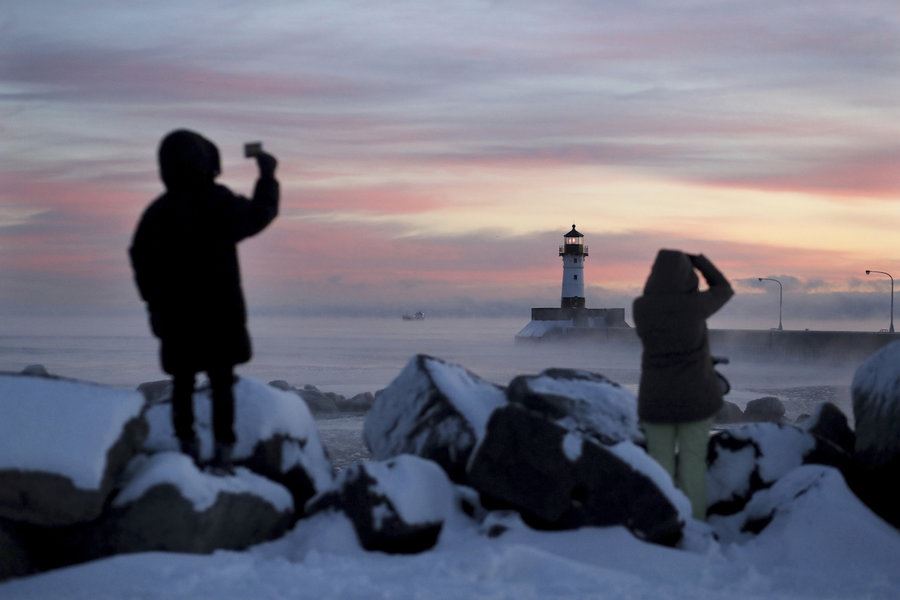 Duluth, Minnesota, shown here on Jan. 1, 2019, sits on Lake Superior, the largest freshwater lake in the world. Its freshwater access and cool climate has some researchers suggesting the Rust Belt city’s economic future may come from climate-driven migration.David Joels/Star Tribune/AP

One day Duluth, Minnesota, might offer another kind of relief: as a haven for future U.S. migrants fleeing runaway heatwaves and other extreme weather elsewhere in the country.

The Minnesota town, nestled along the world's largest freshwater lake, is among a small group of cities that scientists predict will become top destinations for Americans abandoning parts of the country one day made inhospitable by climate change.

Up to now, frigid winters in Duluth – often ranked one of the coldest cities in the United States – have limited its appeal. The city, planned to one day become as large as Chicago, never quite achieved its aims, as vacant lots testify.

But Sandy Hoff, the president and owner of local real estate development firm F.I. Salter, said a changing climate could spur a property boom that would "no doubt" propel his company in ways unseen since his grandfather acquired it 90 years ago.

"Duluth, in particular on the shore of the lake here, has tended to be a little cooler maybe than people have wanted at times in the past," he admitted.

"Maybe a little climate change, where we're getting a little warmer, is beneficial to us," he said.

Predictions that a wave of Americans could one day wash in as a result of climate threats leave many residents part intrigued, part skeptical.

She's kidding, of course, she said – after all, she sells homes in Duluth for a living.

Some early climate migrants already are already buying them.

Angel Dobrow, her husband Bob, and their dog arrived in Duluth in 2017 from Northfield, about three hours south, and bought a sandy brown brick bungalow on two acres, with a backyard forest included.

Ms. Dobrow, who works as a herbalist and for a small company that supports farmers, said they made the move amid growing worries about how climate change might affect them.

"The No. 1 criteria for me was access to freshwater. I'm nervous about climate change. I wanted to be where – I mean it's a little hokey – we could walk and have water," she said.

Leaving their home of 16 years "was hard," said Ms. Dobrow. "But we felt like we were being freed" from concerns about where they would best be able to ride out climate change impacts.

Harvard's Professor Keenan, an idiosyncratic bow tie wearer, first set foot in Duluth in March – three months after he began fleshing out why the quiet town of 86,000 might one day see tens of thousands of new residents settle in.

The professor and his team had identified Duluth after more than 2,000 hours of work studying which U.S. towns might appeal to tomorrow's climate migrants and have room for them.

Duluth abuts the cooling breeze of Lake Superior – a big source of freshwater – and is a reasonable 2.5-hour drive to a dynamic economic hub, Minneapolis.

The northern city's infamous cool weather means it will be temperate when most of the country sweats in a world climate experts say could be up to 1.5 degrees Celsius (2.7 degrees Fahrenheit) hotter than preindustrial times as early as 2030.

With its secure water supply, it is also less likely to face some of the climate-driven threats other parts of the country may grapple with, including worsening droughts and water shortages.

Other U.S. "Rust Belt" cities – which lost population as heavy industry declined – also have been floated as potential climate refuges, including New York state's Buffalo and Cincinnati in Ohio.

On a visit to the University of Minnesota Duluth (UMD) in March, Professor Keenan offered a few sleek potential slogans for the city: "Duluth – not as cold as you think," "The most climate-proof city in America," or "Duluth: 99% climate-proof."

The social scientist was riffing off some of Duluth's own marketing ideas from another era, when it tried to persuade tourists that the lake-side city was worth a detour.

The invention of air conditioning meant some residents of Rust Belt cities such as Duluth eventually departed for warmer destinations in the south of the United States, following jobs, said David Woodward, a professor of history at UMD.

As a result, Duluth represents a "time capsule" of sorts, with a population virtually unchanged in half a century, Professor Woodward said.

That means there is room for newcomers – but after decades of a somewhat-depressed economy and no need for fresh housing, many of Duluth's homes have aged. Some fear the city is not ready for an influx.

The Loaves and Fishes residences are for Duluth's homeless residents, most of whom work but cannot afford the high rents landlords typically charge, said Joel Kilgour, who volunteers at the nonprofit and chairs the Affordable Housing Coalition.

Rents have skyrocketed largely due to a housing shortage of about 3,000 units. Local housing is shared with about 30,000 college students who need a home during the school year, said UMD's Professor Woodward.

"If we as a community can't solve [current problems], there's no way that we're going to be able to handle an influx of climate refugees in an equitable manner," he said.

That conundrum is on the mind of many more Duluth residents as well, including elected officials such as Mayor Emily Larson, a former Loaves and Fishes volunteer.

In the heart of the Civic Center, Ms. Larson's stately office, with ornate brass lamps hanging from the ceiling, acts as a reminder that this mid-size city hall was intended for a "big city mayor," she quipped.

If climate migration puts to better use Duluth's oversize territory and infrastructure – there are 29% more road miles per person here than in the similarly-sized Minnesota town of St. Cloud, federal data shows – the result could be a kind of "ironic serendipity," Ms. Larson said.

But she concedes she has "trepidations" about rapid future growth.

"We struggle like many communities to ensure we have economic opportunity and safety and housing," she said.

Preservationists such as Dennis Lamkin also fear for the city's historic housing stock.

After developers build on the ample vacant and forested land on the city's periphery to meet growing demand for homes, continuing waves of climate migrants could prompt razing of the city's myriad aging historic mansions to make room for apartments, he worries.

Many mansions were erected during the city's heyday at the turn of the last century, when more millionaires lived here than anywhere else in the nation, thanks to thriving mining, lumber, and wheat industries.

"I would hate to see developers come into town, tear down the historic architecture that we have, and just build nondescript housing units to accommodate climate refugees," he said.

Harvard's Professor Keenan said after his presentation in March he received at least two dozen emails from people who had recently moved to Duluth with climate change in mind.

"Last October I bought a house in Duluth. It's my retirement plan," said New Yorker Lacy Shelby by email. "I needed ... a lower 'dose' of noticeable climate change," she said.

Word is spreading among physicians, too. At St. Luke's Hospital, recruiter April Knapp, whose job it is to convince in-demand physicians to take a job in Duluth, said reading up on climate change was now on her "to-do list" as she finesses her pitch.

Already, about 10 potential job candidates have mentioned hearing that Duluth may be a climate-proof destination, she said.

In a brutalist campus building next to a highway, Patrick Schoff, the biology research associate at UMD who invited Professor Keenan to present his vision for Duluth, is already plotting next steps.

A conference looking at the economic aspects of positioning Duluth as a climate refuge is in very early planning stages, he explained, and other ideas are circulating as well.

For Ms. Dobrow's close friend, Karen Olson, a future in Duluth is already in the works.

Ms. Olson is also planning in a year or two to leave the Minnesota town of Northfield for Duluth, looking for the best place to ride out forecasted climate threats.

"This feels like the last big thing that I can do in order to have at least tried to be as responsible as I could to my children," she said.

"I wanted to leave something, a place for my children to potentially have some kind of a chance, some sort of safe harbor."

This story was reported by Thomson Reuters Foundation.