by Sam from New York 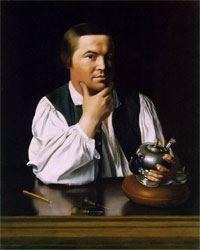 Paul Revere was born in Boston in the month of December, 1734. The precise date is not known. Paul came from a family of 11 or 12 children, only 7 grew up to be adults. He was the oldest boy. Paul’s father, Apollos Rivoire, came to America from France at the age of 13 and became a silversmith. Paul Revere grew up on Fish Street near the wharves. He stopped going to school at the age of thirteen to work for his father as a silversmith’s apprentice. When Paul was 21, he gave up silversmithing to join the French and Indian War.

Paul Revere is a hero because he risked his life for the colonists. He was a messenger transporting information between the colonies of Lexington and Concord. The members of these colonies were fighting against “Taxation Without Representation." Paul Revere made the famous Midnight Ride from Boston to Concord. He warned the colonists, “The British are coming.” Paul Revere was one of the few living witnesses to hear the first shots of the American Revolutionary War.

During the Midnight Ride, Paul had to overcome being sought after and captured by the British soldiers. He may have seen the Boston Massacre on Monday, March 5, 1770, an infamous event in American history. Paul was brave enough to travel to England following the Boston Tea Party to deliver a message to King George III explaining the reasons for the Tea Party.

Paul Revere was not a self-centered coward because he was more concerned for others than for his own safety. The Midnight Ride was one of the examples of his selflessness. He was brave because he held illegal meetings in Boston even when the British were around. He agreed to be a leader even when it put him in grave danger. Paul was also very smart. He thought to use two lanterns as signals of the British invasion. We all know the saying, “One if by land, two if by sea.”

Paul Revere is known for his excellent silversmith work and the Midnight Ride. Paul made a bowl which had the names of the 92 members of the Massachusetts Legislature who refused to obey King George’s orders. He contributed money to fix the Liberty Bell, which was damaged by the British. Paul Revere also was known for his bravery in protecting the safety of others.

This is why Paul Revere is a hero and an inspiration to us all, and an award-winning hero.

And Then What Happened, Paul Revere?
Jean Fritz