“One day, walking through the hall of one of the university buildings, I happened on a meeting in a classroom where students were being asked to get involved in a struggle against rat-infested housing in the neighborhood...For the first time, I was talking with people in the black community, getting a sense of what segregation and discrimination meant in people’s lives, learning how to organize protests, demonstrations and meetings” (Boggs 36). 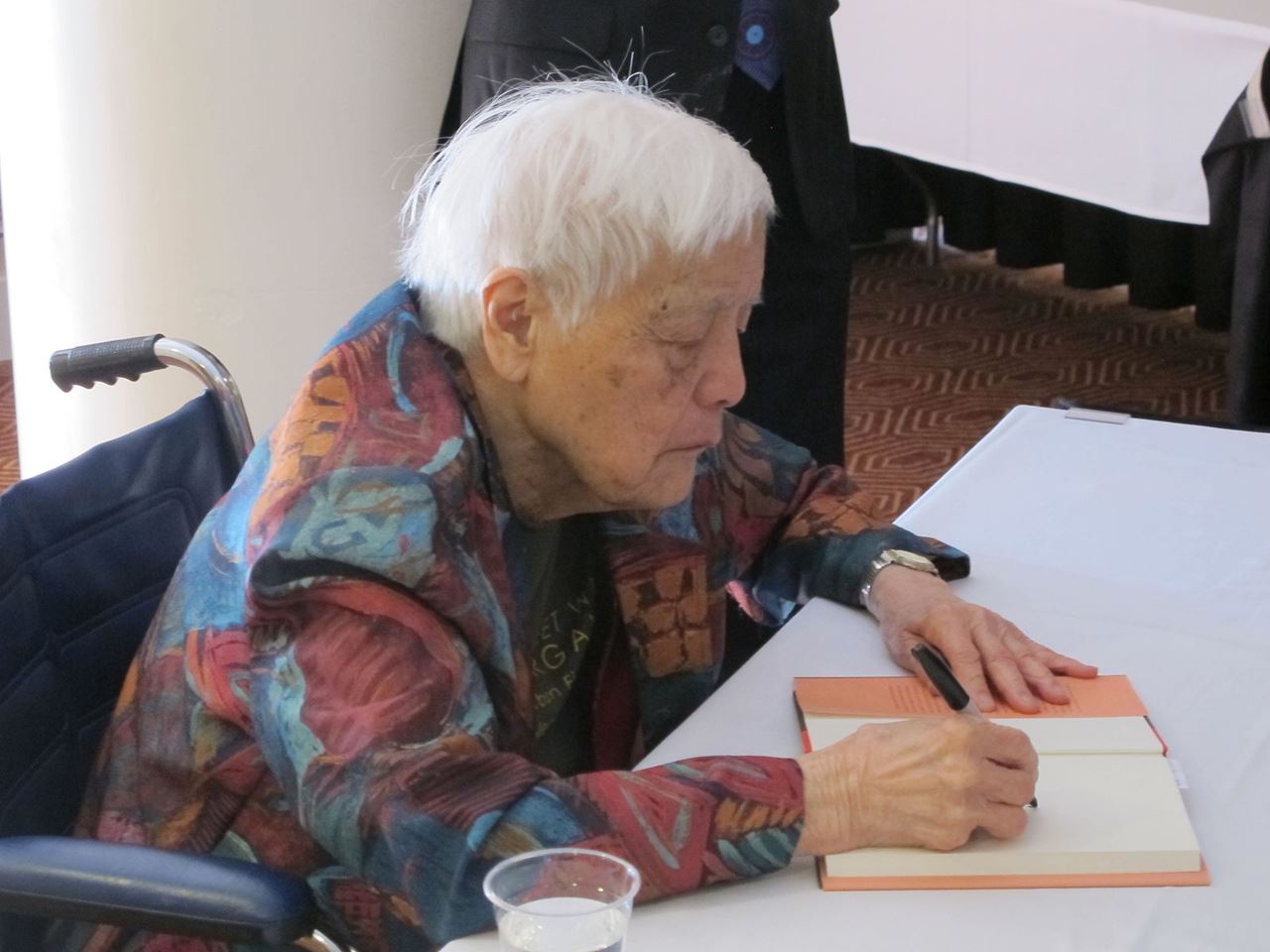 Grace Lee Boggs autographing her book at the Chinese Cultural Centerhttps://commons.wikimedia.org/wiki/File:Grace_Lee_Boggs_autographing_her_latest_book_at_the_Chinese_Cultural_Center.jpgThis moment, despite its initial insignificance, was the spark of the beginning of a lifetime of heroism. What truly makes a hero is subjective. However, I believe that having a positive influence on masses of people and dedication to what I consider a moral cause (such as advocating against discrimination of race, gender, class, and religion) is what defines a hero. Whether influence and dedication take form as teaching, healthcare, or activism, like it did for Grace Lee Boggs, those traits are a guaranteed sign of a hero.

Despite the adversities she faced, Grace Lee Boggs persevered and used the obstacles as a way to truly dedicate her life for the benefit and influence of others' lives. Grace Lee Boggs was born on June 27, 1915, and she died on October 5, 2015. She enrolled at Barnard College at the age of 16, graduated in 1935 with a degree in philosophy, and in 1940 earned a doctorate from Bryn Mawr College. She studied the writings of Marx and Hegel, which greatly influenced her philosophy on life. In 1953, Lee married African American activist Jimmy Boggs and moved to Detroit, where she would spend the remainder of her long life helping others. In 1992, she and her husband founded Detroit Summer, a multi-racial collective dedicated to improving the lives of the youth of Detroit and to restoring the beauty of the city. She attended many African American rights marches led with speeches by Martin Luther King Jr. and Malcolm X, two people who Boggs was close to and who greatly inspired her. Although it did not quite inspire her like Martin Luther King Jr. and Malcolm X did, Boggs’ upbringing as a girl in a highly patriarchal family definitely drove her determination in her activism against discrimination. There were many other important people in her life, many of whom were people who worked with her on her projects like Detroit Summer. Grace Lee Boggs was a feminist, African American rights activist, Asian American rights activist, and workers’ rights activist. Boggs was so active in her advocacy that the FBI highly surveyed her. A hero, like Boggs, must possess a dedication to their cause and a positive influence on their community. Dedication means being committed to doing good, and influence is impacting lives for good. Social rights activist, philosopher, and book author Grace Lee Boggs deserves the title of “hero” because of her positive influence and dedication towards benefiting the lives of both minorities and the citizens of Detroit.

Grace Lee Boggs influenced others to, like her, transcend racial and social class boundaries to seek ways to create a better society and to persevere through adversities by setting an example through her activism and the discrimination she faced. Boggs’ actions influenced people of every background, from the impoverished to former president Barack Obama, as he affirmed in his statement on the passing of Boggs’ death: “...from her community activism in Detroit, to her leadership in the civil rights movement, to her ideas that challenged us all to lead meaningful lives” (Obama). Obama describes how, because of how Grace Lee Boggs advocated for social change in Detroit and impacted the civil rights movement, many people have been influenced to bring purpose to their lives in some way. Boggs influenced her community of African Americans and the city of Detroit to take action and help those in need, especially if their voice isn’t heard. Her key role in the civil rights movement and her contribution to the improvement of minorities’ and indigent lives affect every class because her actions drastically changed the course of history. Boggs’ participation in justice uprisings and in helping Detroit flourish was not only recognized by Barack Obama, but also by celebrities, scholars, and the intended everyday residents of Detroit. In her article “The (R)Evolutionary Vision and Contagious Optimism of Grace Lee Boggs,” Barbara Ransby states,

“The Boggs Center, which she founded, was a creative space for artists, the young participants in the now-famous Detroit Summer projects and various fans and visitors who migrated there to pay their respects to Grace. Those visitors included celebrities and scholars: from the late Ruby Dee and Ossie Davis to Danny Glover, historian Robin D. G. Kelley, and Chicago activists Bill Ayers and Bernardine Dohrn” (Ransby).

Boggs greatly impacted many lives, some of which are listed by Ransby, who had been so influenced by her that they paid respects to Boggs after her death and continued keeping the Boggs Center active, in turn keeping her vision alive. Boggs’ activism for the justice of African Americans and workers led her to discover her love for helping others, which eventually led to her founding Detroit Summer in her later years. Clearly, the program and Grace herself had a lasting positive impact on society if so many notable and ordinary people felt a personal loss after her death. No, Boggs was not perfect, but as Jen Doll states about another hero, Katniss Everdeen in The Hunger Games in her article “On the Importance of Having Superheroes,” “Flawed as she is, as they all are, that only serves to make her more empowering as a role model.” Boggs had flaws, as everybody does; however, her flaws and the bumps in her life served to influence those who have experienced the same thing. She was not perfect, nor did she have a perfect life. However, her flawed life built her up to be who she was and to stand up for others, allowing her to be a role model for those who had experienced what she had experienced or what she was fighting to abolish. Grace Lee Boggs’ involvement in the uprisings for justice for African Americans and workers, as well as her founding of the Detroit Summer program, influenced too many lives to be disregarded as a hero. 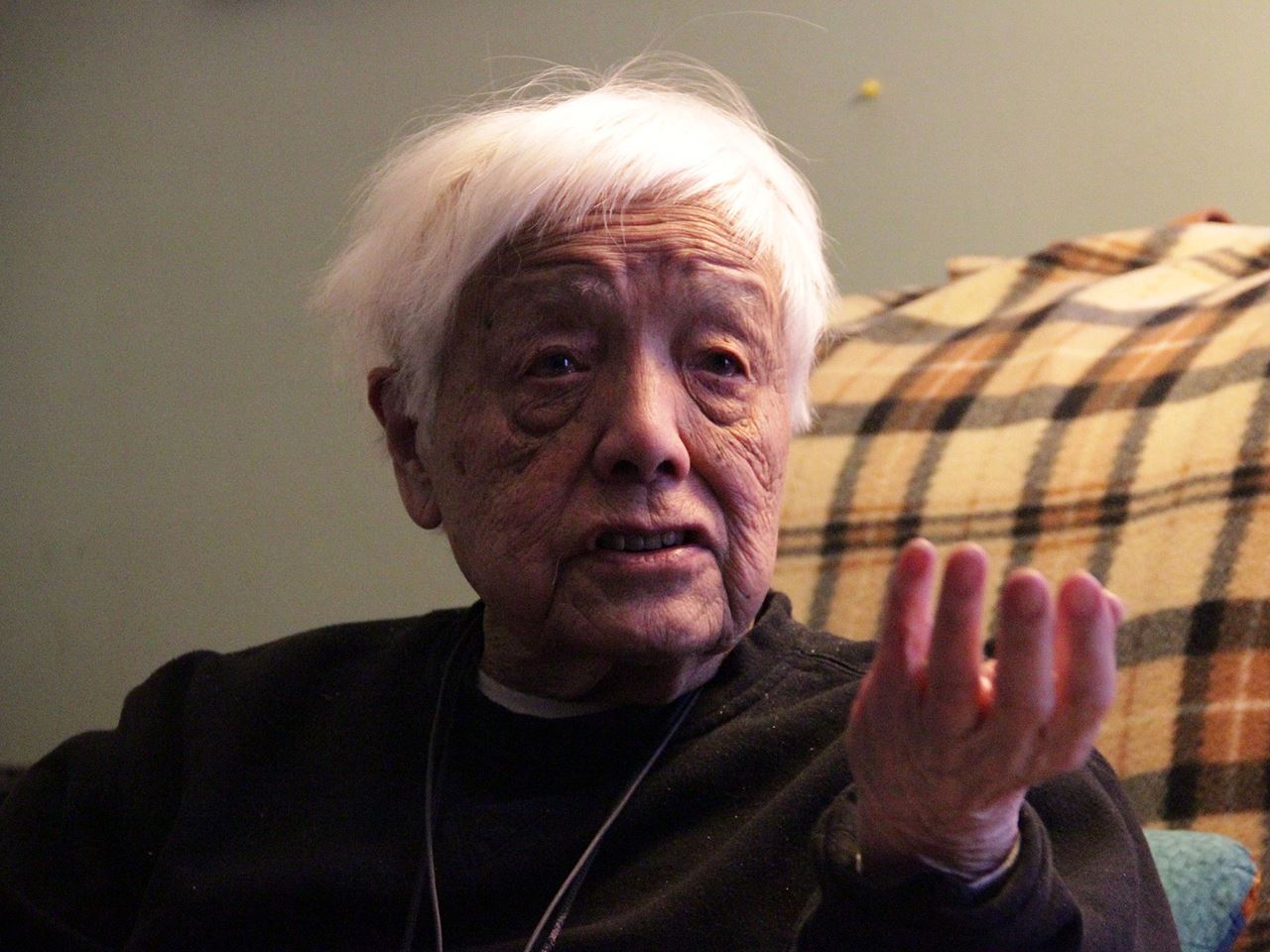 Grace Lee Boggshttps://commons.wikimedia.org/wiki/File:Grace_Lee_Boggs_2012.jpgGrace Lee Boggs dedicated her life to improving the lives of others, an important quality of a hero. Barbara Ransby in “The (R)Evolutionary Vision and Contagious Optimism of Grace Lee Boggs” elaborated on Grace’s dedication by stating, “In 2010, at the US Social Forum in Detroit...Grace was center stage in a plenary conversation with Immanuel Wallerstein. At 95, she was sharp, lucid, and on point. She would often joke and say, ‘I’ve lost some of my hearing and a little bit of a lot of other things, but I still have all my marbles.’ She certainly did.” At age 95, Grace was still highly active in continuing to stand and debate for minority community ideals. Boggs began her participation in her late teen years, meaning she had been contributing to the improvement of others’ lives for the better part of seven decades, an astounding amount of time to dedicate towards others, despite the adversity she faced. Even Grace herself recognized in her book “Living for Change” what it would take to enact a revolution and was determined to see her goals through. “Human beings are constantly struggling to make what they believe to be true, right, and just into a reality in their individual and social lives. Progress does not take place like a ‘shot out of a pistol’. It requires the labor, patience, and suffering of the negative. In everything, there is the duality of the positive and the negative. What is important is not any particular idea, but the process of continuing development as the contradictions or limitations inherent in any idea surface and require the leap to a new idea or a new stage of Spirit” (Boggs 31). Boggs believed that in order for social change to occur, she needed to progress slowly to ensure that real, long-lasting effects developed. Being a philosopher, Boggs integrated what she learned from philosophers Hegel and Marx into her own philosophy of peacefulness and patience to enact change. Her efforts went towards her activism over the course of her 100-year life because she knew that if she wanted change, time to persuade was needed. Grace Lee Boggs dedicated seven decades of work towards the goals of social activism, supporting her philosophy of patience to find change.

Through her dedication and positive influence, social rights activist and philosopher Grace Lee Boggs exemplifies the traits of a true hero. Boggs dedicated her life to helping the lives of others, selflessly fighting for causes that did not directly affect her. This dedication and the results of it influence people of all backgrounds to transcend racial and social class boundaries to seek ways to create a better society, and to persevere through adversity. In the documentary "American Revolutionary: The Evolution of Grace Lee Boggs," Boggs states, “People are so searching for icons that they sort of fixed on me…”. People, specifically Asian Americans, looked up to the strength that Boggs possessed to persevere through the adversities that she faced to help others and fixed on her as a hero. Even Barack Obama says, “Grace’s passion for helping others...will continue to inspire generations to come.” Boggs inspires me because as a Chinese American woman, she shows that it is very much possible to overcome the struggles that I may face and to fight for something that I believe in, with results in attaining the goal. When I was seven and in the second grade of elementary school, I faced some racist comments from my peers. Whether it was pulling their eyes back and saying they looked like me or flat out calling me “ching chong,” those comments still hurt. I remembered reading about Grace Lee Boggs and learning about how she faced racism growing up, but pushed through it and decided to spend her time taking action and helping others in greater need. So, I decided to first make sure my peers understood why they shouldn’t say and do those things. Second, I decided to focus my efforts on school, art and advocating against discriminations of larger groups. Sure, school and art aren’t helping others, but I still put my obstacles behind and moved on to other things more worth my time. I’m not advocating on a level anywhere close to Grace Lee Boggs; however, I still do whenever I can because I know it’s right. Despite the adversities that she faced, philosopher and activist Grace Lee Boggs transcended those boundaries and discovered a way to positively influence many lives through her dedication, making her a hero.