"Some men see things as they are and say 'Why?' I dream things that never were and say, 'Why not?'" 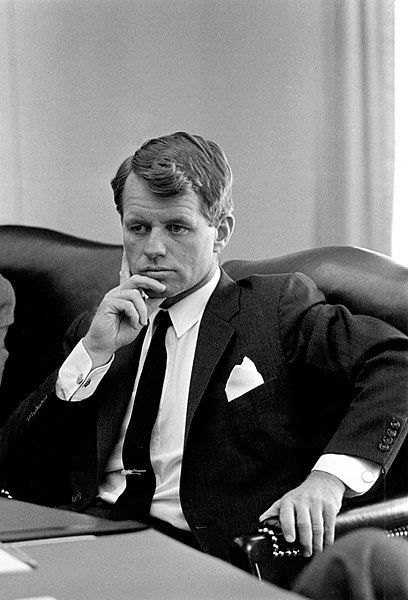 Robert F. Kennedy, Cabinet Room, White House, Washington, DC. 28 January 1964LBJ Library photo by Yoichi R. Okamoto [Public domain]“Let us dedicate ourselves to what the Greeks wrote so many years ago: to tame the savageness of man and make gentle the life of this world” (qtd in Slack). Robert Francis Kennedy was born November 20, 1925, into a family of politicians and aristocrats, the most notable of them being his father Joseph Kennedy, who served as a US ambassador to the UK, and, of course, his older brother John F. Kennedy, who would become President in 1961 (History.com Editors). As a child, RFK worked tirelessly to overcome his title of “runt.” Kennedy continued to use his perseverance through his life, later graduating from Harvard in 1948 and earning his law degree from the University of Virginia in 1951 (History.com Editors.) RFK started his governmental career working as a lawyer on the McCarthy subcommittee investigating communist ties in the US Government. He later left the committee due to McCarthy’s brutal tactics, and he proceeded on to other committees, including one investigating Jimmy Hoffa’s mob ties (“Robert Francis Kennedy”). After serving as campaign manager for his brother's presidential election, Robert F. Kennedy was nominated to the office of US Attorney General. As Attorney General, RFK fought for civil rights and led a crusade against organized crime. JFK’s death in 1963 fundamentally changed RFK, making him less conservative and awakening within him a desire to make the world a better place. After his tenure as attorney general, Kennedy ran successfully for senator of New York. As a senator, Kennedy continued his crusade to improve the world, advocating for the implementation of social policies to improve society. In early 1968, RFK decided to run for the presidential election (“Robert F. Kennedy”). On June 5th, he won the California primary, but, directly after giving a speech celebrating his success, he was shot by a Jordanian extremist and died a day later. Kennedy's death was recognized across the nation as the loss of both a great leader and an inspiration. Robert F. Kennedy stood out as a servant of justice who took down organized crime while supporting social justice for all, a compassionate leader who stood up for the downtrodden of society, and an extraordinarily brave man who wasn’t afraid of risking his life for the benefit of others.

Robert F. Kennedy stood as a pillar of justice, taking down organized crime while also enforcing the law no matter the situation. Organized crime was largely overlooked in America until RFK became the Chief Counsel of the Senate Racketeering Committee, where "[h]e conducted an aggressive investigation into the Teamsters union, focusing on the organization's officials and their handling of union funds as well as their ties to organized crime. The clashes between Kennedy and Teamsters President Jimmy Hoffa made headlines nationwide, and Hoffa was eventually imprisoned for jury tampering and misusing union funds" (“Robert F. Kennedy”). Hoffa was popular and well-connected with both politicians and the criminal underworld; in short, he seemed untouchable. In going after (and later arresting) Hoffa, Kennedy demonstrated that nobody is exempt from the law in spite of their social and political status. As Attorney General, RFK reacted to attempts to bar a black student from entering the University of Mississippi by “[sending] thousands of federal troops to Oxford, Mississippi, to enforce a U.S. Supreme Court order admitting the first black student, James Meredith, to the University” (History.com Editors). At the time, the South was heavily segregated, and attempts to desegregate were strongly resisted. RFK knew this, which made his decision to implement integration all the more important. By enforcing the Supreme Court's ruling, RFK proved he was compelled by the pursuit of justice instead of trivial concerns such as popularity. Kennedy’s action of sending in “thousands of federal troops” shows that he would also go to extreme lengths to see justice done. As an attorney for the government “[RFK] became a tireless pursuer of injustice. To his admirers he was dogged, determined, and brave; to his detractors he was ‘ruthless’--a word that would be used to attack him for years to come” (Frost). Robert Kennedy was simply obsessed with the implementation of justice. This is evidenced by the use of “determined” and “ruthless” to describe him, both of which suggest his incredible commitment to prevailing justice. Finally, his approach towards crime was best summed up by Garry Wills, who stated: “He not only wanted to win... but to destroy evil" (qtd in Frost). In conclusion, RFK was an unyielding force of justice who stop at nothing to enforce it. 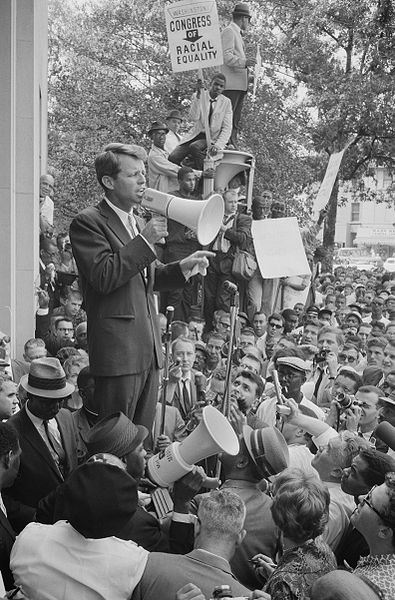 Attorney General Robert F. Kennedy speaking to a crowd outside the Justice DepartmentLeffler, Warren K. [Public domain]In summation, Robert F. Kennedy possessed incredible braveness and would always do what was right, even if he had to risk his life in the process. While Kennedy campaigned for president, the threat of assassination lingered in the air: “But a barely-acknowledged fear cast a pall over every moment of his quest for the presidency--the fear of assassination. Robert himself shrugged off the danger, refusing police protection and ignoring pleas that he exercise more caution in his public appearances. ‘I play Russian roulette every time I get up in the morning,' he once said. 'But I just don't care... If they want you, they can get you'” (“Robert F. Kennedy”). Knowing this, while Kennedy was campaigning for the California primaries, “Bobby and his wife Ethel are in an open car, a convertible; he must have it that way, so that he can feel the crowd, and they can almost touch him. Suddenly five, six shots ring out. Bobby doesn't flinch. Keeps waving. Just a string of loud fireworks” (Aronson 4). Kennedy’s refusal to receive any police protection demonstrates his extreme bravery and commitment to maintaining his connection to the American people. Given the time period, Kennedy's actions were even braver due to the high occurrence of political assassinations, including that of his brother, Martin Luther King Jr., and Malcolm X. Moreover, by not even flinching when he heard potential gunshots while he was in a strikingly similar situation to his brother’s assassination, RFK exemplified his extraordinary braveness in the face of danger. All of the risk-taking boiled down to RFK wanting to connect with the American people. He was willing to risk his life for the sake of being available to people in order to serve them better. Immediately after the assassination of Martin Luther King Jr., Kennedy gave a speech in Indianapolis where “Tensions were running high that night ... The first three months of the year had been turbulent, and the year before had been a violent one...Kennedy’s speech on the death of King has been credited with defusing tensions in Indianapolis, which was one of the [only] American cities that did not see riots that night” (Stack). Announcing to a group of already angry African Americans that their beacon of hope for a better and brighter America, free of inequality, was shot dead by a white man could have easily led to chaos. In fact, the city officials warned Kennedy that they could not ensure his safety and they begged him to reconsider. But Kennedy put his own life at risk in hope of quelling the city’s rage, giving a speech that would later go down as one of the greatest speeches in American history, on par with Martin Luther King’s “I Have a Dream” or Lincoln’s second inaugural address. Kennedy’s risk paid off: “Kennedy’s speech on the death of King has been credited with defusing tensions in Indianapolis” (Stack). By defusing Indianapolis, Kennedy saved lives that would have otherwise been lost in the riots that would have ensued, as they happened in nearly every major US city. In conclusion, Robert F. Kennedy was extraordinarily brave and unafraid of risking his own life to help and serve others. 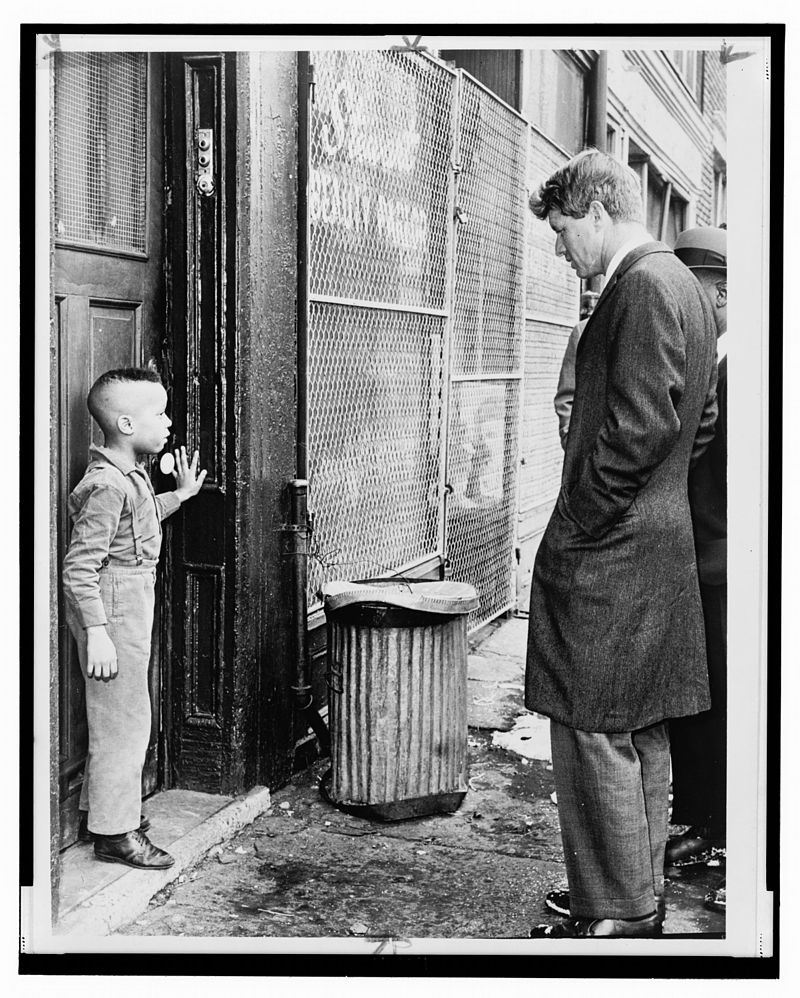 Senator Robert Kennedy discusses school with a young boy[[File:Robert F. Kennedy NYWTS.jpg|Robert F. Kennedy NYWTS]]Robert F. Kennedy is a true hero who stands as a champion of justice no matter the costs, a compassionate leader who seeks to improve the lives of the American people, and a remarkably brave man who was willing to risk his life in order to help others. RFK’s strong sense of justice compelled him to prosecute seemingly untouchable criminals while also serving as a compassionate voice dedicated to helping others. In addition, Kennedy’s extreme bravery and fearless attitude led him to be beloved by the people while also allowing him to risk his own life to help others. Possessing these heroic attributes, Kennedy sought to inspire others to follow his lead and make the world an inherently better more unified place. The most famous example of  RFK’s ability to inspire others was his famous announcement of the death of Martin Luther King Jr, where he stated, "We can make an effort, as Martin Luther King did, to understand and to comprehend, and to replace that violence, that stain of bloodshed that has spread across our land, with an effort to understand with compassion and love. What we need in the United States is not division; what we need in the United States is not hatred; what we need in the United States is not violence or lawlessness; but love and wisdom, and compassion toward one another, and a feeling of justice toward those who still suffer within our country, whether they be white or they be black" (qtd in Stack). By encouraging people to abandon their prejudices and violence and instead turn towards compassion and love, Kennedy acts as an inspiration to make the world a better place where we are all unified as a peaceful nation. His incredible dream of a future free of hatred personally drives me to this day. I admire his compassion and his strong sense of justice. He functioned as the ideal politician, someone who passionately cared about doing the right thing. To put it simply, RFK has given me hope for the future. Kennedy may have died in 1968, but he will live on forever through people like me, who share his values and want to make the world a better place. Robert F. Kennedy was truly a hero and an inspiration for generations to come, who follow the advice of Aeschylus, “to tame the savageness of man and make gentle the life of this world” (qtd in Slack).

Robert F. Kennedy Human Rights - A site dedicated to RFK and the continuation of his dreams for a better future.
History.com - An overarching summary of RFK's life and accomplishments.
JFK Library - Provides background knowledge on both RFK and his extended family
Biography.com RFK - A comprehensive biography of RFK's life.