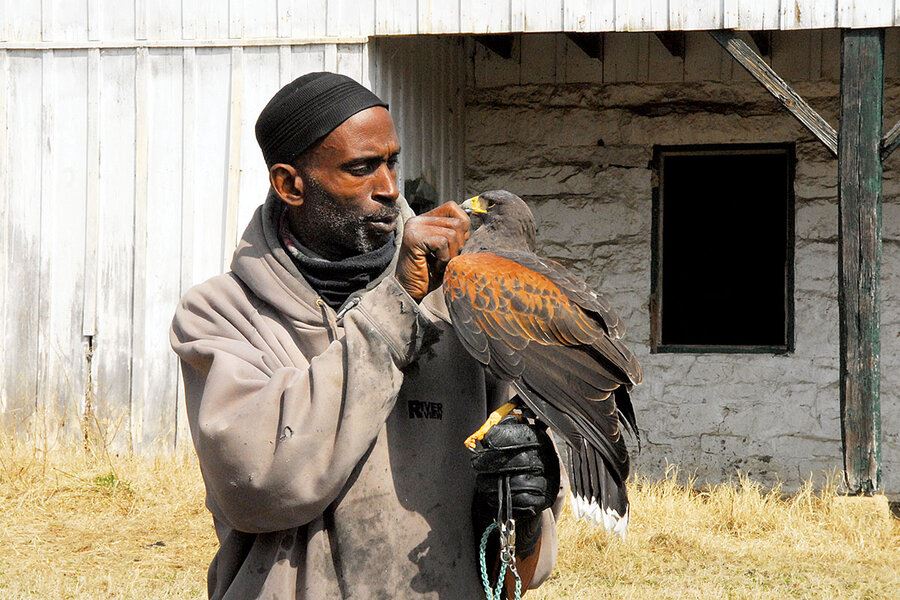 Before young Jamaal Hyatt met falconer Rodney Stotts, the youth had never seen a bird fly from a person’s finger, disappear out of sight, and return at the sound of a whistle. He’d never fed a bird of prey, or understood the trust it takes for one to calmly perch on a person’s arm. He’d never even seen a raptor up close.

Mr. Hyatt grew up in downtown Washington, D.C., where birds rest on traffic lights as often as trees. Two years ago, when his family felt he wasn’t focused on school, they decided to send him to Capital Guardian Youth Challenge Academy, a military school for at-risk students in Washington high schools. It was in the woods here that he met Mr. Stotts – a master falconer, mentor, conservationist, and Dr. Dolittle of sorts.

Mr. Stotts, too, grew up in Washington, and, like Mr. Hyatt, once barely knew a pigeon from a peregrine falcon. But more than 30 years ago, working with animals transformed him from a man of the streets to a man of the woods. He’s since become a mentor for young people facing similar challenges.

That mission brought him to Laurel, where his office is sandwiched between Capital Guardian and New Beginnings Youth Development Center, a youth detention and rehabilitation facility. He works with young people in each facility, giving them an outlet, a role model, and a chance to learn to trust others by learning to trust animals.

“A lot of kids don’t really experience that [kind of connection with animals firsthand],” says Mr. Hyatt, who graduated from Capital Guardian in 2019. “It made me want to get a pet.”

In three decades Mr. Stotts has worked with thousands of people on the streets and in schools, parks, jails, barns, and Zoom calls. Along the way, he founded his own nonprofit, Rodney’s Raptors, and earned his falconry license. The work is low in pay and often poignant, forcing him to confront violence, substance misuse, and loss.

But for Mr. Stotts, whose life is profiled in a new documentary, “The Falconer,” it’s highest in personal reward. If he could change, he tells the young people he works with, so can they.

“I would see how a young person was [struggling to find direction]. It was the same as that bird,” says the falconer.

With a mother who struggled with heavy substance use (before later quitting cold turkey), Mr. Stotts grew up in southeast Washington during the crack epidemic. In early adulthood, he reflected his circumstances; he dealt drugs and was likely to cross up with law enforcement, he says. Then, by accident, he found animals.

In the early 1990s, he needed a pay stub to sign on an apartment and took a position at Earth Conservation Corps (ECC), a nonprofit then focused on cleaning the notoriously polluted Anacostia River. Bob Nixon, the program’s de facto founder and a falconer himself, helped introduce Mr. Stotts to animals and eventually birds of prey.

“The first time I held a bird, period, it took me somewhere else,” says Mr. Stotts.

His early work with raptors at ECC involved rehabilitating injured birds of prey and using them for environmental education. Most raptors don’t live to adulthood, and he learned how a simple intervention could help them survive. He couldn’t help see it as a metaphor for his own life.

“As I was changing from working with the birds and everything and seeing myself change, I couldn’t go back to doing anything else,” Mr. Stotts says.

After a year, he stayed with ECC and eventually took charge of its raptor program, based in Laurel. The ECC’s proximity to Capital Guardian and New Beginnings led to a partnership with each facility. Mr. Stotts’ testimony and persistence have made those partnerships fruitful.

“He’s been engaged since the get-go – that’s the impressive thing,” says Mr. Nixon, of ECC. “He really feels the nature in his bones and gets a real reward in sharing that with people.”

Sharing that interest isn’t easy. When donations run short, Mr. Stotts funds his work himself – even on unemployment aid during the pandemic. To reach the ECC campus here, Mr. Stotts drives his rickety pickup truck, 240,000 miles and counting, from his seven-acre plot in Charlotte Court House, Virginia, a four-hour trip. The campus consists of two barns, where his four Harris’ hawks and one red-tailed hawk have separate 512-cubic-foot aviaries. Like all of his birds, they’re named for loved ones who have died – a reminder, he says, that people are looking out for him from above.

With his falconry license, Mr. Stotts is able to trap new juvenile raptors each year and release them once they reach maturity and have a better chance to survive alone. That process is all about building trust.

Raptors are by nature defensive, and an untrained visitor likely couldn’t exit an aviary without talon marks. But by taking small steps and rewarding them with food – most often mice donated by the nearby National Institutes of Health – Mr. Stotts can bond with them to the point they’ll rest comfortably on his arm. Sometimes, he can even kiss them.

The young people he works with require a similar, gradual effort.

In his weekly two-hour sessions with Mr. Stotts, Mr. Hyatt and a group of other students at Capital Guardian would take the short trip off campus to help care for Mr. Stotts’ animals and clean up. Occasionally they would get to walk horses or feed the birds, though some fret at getting so close to a raptor. The trips, says Mr. Hyatt, were a welcome break from the norm.

“I’d never experienced that before,” says Mr. Hyatt. “I’d never seen or pet any horses or other animals like that.”

In Mr. Stotts, the young people also have a role model who walks his talk. He came from similar circumstances and can understand lingering trials.

While earning his falconry license in the early 2010s, he encountered people who thought “it was an oxymoron to hear ‘Black falconer,’” he says. One person told him Black people eat birds, not fly them.

“There’s a lot of kids out here that don’t really have anything or don’t even believe in [themselves],” says Mr. Hyatt. “Seeing somebody like that ... can uplift them and give them a little bit more hope.”

In 2006, Hollis Wright needed that hope. At that time, he was 19, volunteering with ECC, and living on the edge of the law. Like many young men who came out of underserved parts of Washington, he says, he acted tough. And like many in the program, he’d heard nothing but praise for Mr. Stotts.

“It was like he was this mythical creature, almost,” says Mr. Wright.

At one point, Mr. Stotts shared his testimony with the class. Afterward, Mr. Stotts laughed, hearing Mr. Wright blustering in front of the group.

Taken aback, Mr. Wright stepped aside to talk to him. At the end, the younger man asked Mr. Stotts to treat him like family. To this day, Mr. Stotts calls Mr. Wright his “nephew.”

Over time, that relationship helped Mr. Wright confront problems with anger, trust, and his family. More than 15 years later, he has a stable career in law enforcement and a family of his own. He credits Mr. Stotts: “I was a bird with the broken wing when he met me. He took the time and he took the effort to show me that it’s OK to trust, that it’s OK to allow someone to help me heal.”