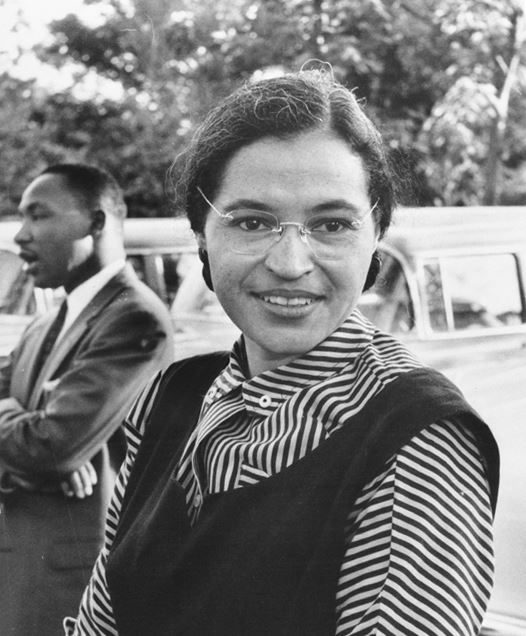 Rosa Park was an African American woman who rallied the struggle for racial equality when she refused to give up her bus seat to a white man in Montgomery, Alabama. She was a civil rights activist. Her resistance sparked the Montgomery Bus Boycott. Its success launched nationwide efforts to end racial segregation of public facilities. Rosa parks was born in Tuskegee, Alabama on February 4, 1913, and she moved with her parents (James and Leona McCauley) to Pine Level, Alabama when she was two years old to reside with Leona's parents. Her brother Sylvester was born in 1915 and then her parents split. Rosa Parks grew up on a small farm with her brother, mother, and grandparents. She is important because she has helped initiate the civil rights movement in the United States of America.

Rosa and her family have experienced racism in less violent ways. When Rosa entered school in Pine Level, she had to attend a segregated establishment under Jim Crow laws where one teacher was put in charge of about 50 to 60 children. White children were bused to school whilst black children had to walk to school. Rosa Parks wasn't the first one to do this. A fifteen-year-old civil rights activist named Claudette Colvin was hauled off a bus and jailed for not giving up her seat. However, she was pregnant at the time and the NAACP didn't think she could obtain the support of conservatives to spark a movement, and then Rosa Parks came in. Since Parks hated segregation laws, she had been fighting for civil rights for more than 10 years. Rosa Parks was never one to break the rules. Her actions inspired the leaders of the local Black community to organize the Montgomery Bus Boycott.

At age 19, Rosa married Raymond Parks, who was a barber and a civil rights activist. He encouraged her to return to high school and earn a diploma. Parks later made a living as a tailor. In 1943 she became a member of the Montgomery chapter of the National Association for the Advancement of Coloured People (NAACP), and she served as a secretary until 1956. Raymond also supported Rosa Parks during her Boycott Campaign. Raymond Parks was the son of David, who was a carpenter, and Geri Culbertson Parks. Raymond spent his childhood caring for ill family members and was orphaned as a teen. When he proposed to Rosa on their second date, she thought, ''He was too white,'' but she was impressed with his character and defiant attitude.

Throughout the Boycott process, Mrs. Parks got arrested for violating the segregation laws and the judge fined her $14. Mr. E.D Nixon who is a long-time civil rights leader wanted to help Rosa end the unfair treatment towards African Americans. Rosa Parks knew the bus driver named James Blake, he is known for treating black passengers without nobleness. Blake has stopped Parks from entering the front of the bus telling her to use the back entrance, then sped away before she got on. Nixon led the effort to turn Park's arrest into a one-day boycott and it was a success that it transferred into a broader boycott until black people were treated better. Nixon and Parks knew that they will be receiving harassment and death threats.

The Boycott lasted for 381 days and the people outside Montgomery embraced the cause of protests of segregated restaurants, pools, and other public facilities all over the United States. On November 13, 1956 the Supreme Court upheld Montgomery's segregated bus seating as unconstitutional, and a court order to integrate the buses was served on December 20, and the boycott ended the following day. For Parks' role in igniting the successful campaign, she became the Mother Of The Civil Rights Movement. Rosa Parks was an accomplished activist by the time of her arrest.