by Colin B. from United States

During the Civil Rights movement, two out of three black Americans fought for their equal rights, but no one fought better in the ring then Rosa Parks. She is a very interesting woman with a ton of accomplishments, such as the bus boycott, and a fascinating life. She really was a real hero.

Rosa  had a very fascinating and interesting  early life. Rosa Parks was born into the world in 1913. She lived in Tuskegee, Alabama  with her very loving family who were against unequal rights. All her life she wanted to be just like her mom: caring, strong, and a great person in society. In 1924, she attended Montgomery High School for girls. When she graduated in 1928, she was a working woman with a great job. Rosa married Raymond Parks in 1945. Spending 20 years with Raymond, he finally passed away due to a heart attack in 1965.

Rosa had a lot of accomplishments as a civil rights leader. Have you ever heard of the bus boycott? Well thank Rosa Parks. One day when she was minding her own business on the bus, a white man was trying to get her to move to the back of the bus so he could sit there. But Rosa held her ground. When the bus driver got involved, he called the police. This made Rosa start the bus boycott. People didn’t ride the bus for months and companies were losing money. When Rosa  stood up for herself, she changed America in that five minute situation. Now that’s what I call a hero. 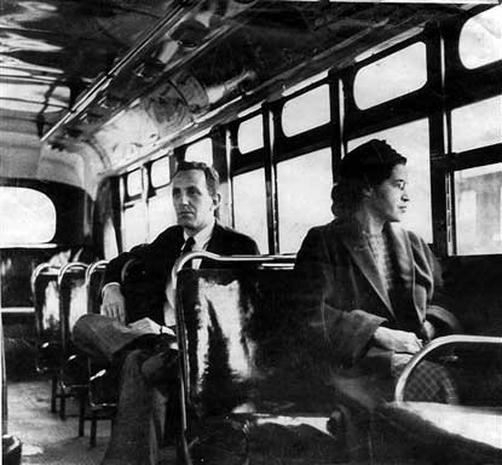 Rosa Parks on the BusCBS News