by Kayley from San Diego in United States

“...a hero is someone who rises above his or her fears and limitations to achieve something extraordinary...a hero embodies what we believe is best in ourselves” (Fleming 14). In this quote by Fingeroth, Fingeroth offers his idea of what the definition of a hero is and what qualities they must possess.  Unlike the clear-cut nature of Fingeroth’s quote, however, the instances or characteristics that can be labeled as ‘heroic’ are arguable. In the context of modern society, heroism can be seen as personal accomplishment or efforts made toward advancements for the common good. Heroes themselves can also be common people in our everyday life; anybody who stands up to a bully, puts others before themselves, or even overcomes a personal issue can be defined as a ‘hero’. Personally, I believe a hero should be courageous and intrepid, willing to fight for their goals and dreams. They must be determined to accomplish their goals and overcome torment, remaining resolute when faced with difficult situations and hardships. 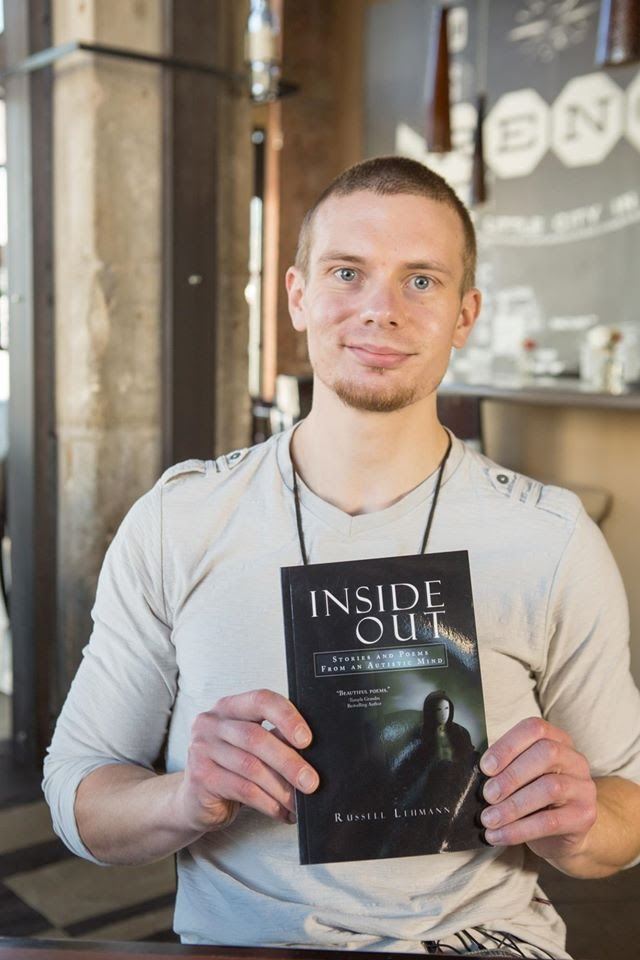 Lehmann has published his autobiography, "Inside Out", which includes poems and stories from his childhood.Youtube   Unwavering determination and valor are a few of the traits an ideal hero should possess. Russell Lehmann is the epitome of a hero who embodies said characteristics. Lehmann was born on December 5, 1990, in Washington. Despite living with disabilities since his birth, he was not diagnosed with autism, obsessive-compulsive disorder, anxiety, depression until the age of 12, and was later diagnosed with anorexia. As a child, he struggled with seemingly simple tasks, such as leaving his house or socializing with others. Over time, and with help from his high school and family, Lehmann managed to triumph over many of the complications his disabilities brought. Later on in his life, Lehmann decided to become an advocate for autistic people and is now a member of the Nevada Governor’s Council on Developmental Disabilities, on the board of the Autism Coalition of Nevada, and oftentimes the keynote speaker at various events. Throughout his life, Lehmann has displayed his persistence and bravery and his willingness to fight through and endure any hardship to achieve his aspirations. Russell Lehmann’s courage and tenacity aided him in overcoming his autism, OCD, and anxiety. He stands as an inspiration for others to follow and admire by demonstrating what is possible when he fought through his struggles.

Lehmann’s courage helped him overcome the adversity and fear that stemmed from his anxiety and OCD. During his time in high school, Lehmann decided to join his high school football team in an effort to overcome his social anxiety. Before practices and games, he struggled with the thought of playing and interacting with the other players, but desperately fought through his agoraphobia: “...if I couldn’t go to practice, I couldn't play football. With this in mind, I prevailed each and every time that I had a panic attack before practice” (Lehmann 38). In order to accomplish what he desired, Lehmann continued through his misfortunes despite continual “panic attacks” and did not turn back when faced with adversity. Instead of avoiding the issue and staying safe, Lehmann went out of his way to try to control and overcome his overwhelming fear and anxiety despite his many exhausting breakdowns. After one of Lehmann's speaking events, he was prepared to board his flight when it was delayed. One of the ways that Lehmann controls his anxiety and OCD is by keeping a strict schedule. As a result of the discrepancy in his schedule, he suffered from a severe panic attack: “‘That’s when I [Lehmann] made up my mind. Yeah, I’m getting on this plane’... ‘I [Apkarian] saw that second flight did have a bit of a delay. But it showed that you had stayed onboard and got through. I was very happy about that’”(Isay). Following the disruption in his flight plans, Lehmann suffered from a severe panic attack. However, he managed to push past his anxiety and stay in the uncomfortable situation. Instead of deciding to stay off the plane so his panic attack would not worsen, he braved it through and did not cave into his fears. Russell Lehmann’s valor allows him to face his fears and overcome his hardships without bowing to his terrors, displaying the bravery that fills him, leaving no room for timidity. 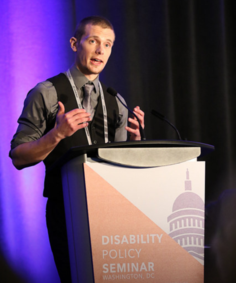 Lehmann often speaks at various events, inspiring others with his story.Russell Lehmann home page
Lehmann’s tenacity allows him to fight through difficult situations, no matter the circumstances. Nearing the end of his 2009 high school football season, Lehmann made tremendous progress with his social anxiety and communication skills, but his physical stature regressed due to an injury. It was potentially threatening to his ability to walk and run normally, but he pushed through the pain and finished his season strong: “... I had lost all the cartilage in my big right toe… I gritted my teeth and was able to play in every game. I finished tied for the lead in sacks and lead in all defensive ends in tackles”(Lehmann 42). Lehmann could have easily taken the easy way out and quit football before his injury progressed into something worse. Despite being in excruciating pain, Lehmann continued striving for his goals of achieving high standards in football. He continued through burdens thrown at him to the best of his ability. Instead of giving up and quitting football, he fought through his pain to complete and excel during his season. Knowing the struggles of those with autism, Lehmann passionately declares: “I have made a promise to myself that all the pain, anguish, and agony that I have encountered would not be in vain. I made a commitment to use my experiences, and what I have learned from them, to help others overcome their challenges. I am here to give others support, inspiration, and hope…”(Russell Lehmann home page). He is determined to help others and ensure that no one has to suffer the same cruel path that he himself was forced down. He sees and uses his struggles as opportunities to learn and improve. Lehmann refuses to view his troubles as hindrances and setbacks, rather using them as a learning and teaching opportunity. Lehmann pushed through the most difficult of dilemmas and conquered them, determined to defeat his demons. 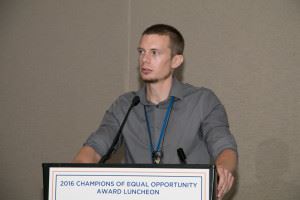 Lehmann advises others on how to overcome their shortcomings.Northern Nevada CenterRussell Lehmann stands as a heroic figure that others can draw inspiration from, as he triumphs and controls his disabilities with his determination and bravery. Despite his OCD and the continual fears it gave him, Lehmann’s courage in overcoming this adversity makes him a source of encouragement. His tenacity allows him to fight through difficult conditions and share the lessons he acquired while overcoming his hardships. He encourages people to disregard the stereotypes surrounding autistic people and not judge them harshly for their speech manners or behaviors, or lack thereof. I personally am grateful for the message Lehmann projects as I have a younger brother on the mild autism spectrum. When people hear of this, their speech immediately reverts to as if they were speaking to a toddler and assume that everything needs to be “dumbed down” in order for him to understand. As his older sibling, it often leaves me frustrated as my little brother is often left confused and hurt after such encounters, as he wishes to be seen as a regular person with no disabilities. Lehmann also encourages those who suffer from autism to embrace their challenges and use them as a chance to grow: “Yes, they [challenges] make us who we are, but they do so much more than that.  They inspire hope, change, accomplishment…”(Russell Lehmann home page). Russell Lehmann realizes that his challenges are brought upon him for a reason, and he strives to fight and find a way past his difficulties. When my brother is dispirited, I hope to inspire him and show him that problems should not be seen as setbacks, and instead as learning opportunities to improve. Russell Lehman is an inspiration to many and continues to overcome the hurdles in his path.