by L Fischer from Fredericksburg, Virginia in United States 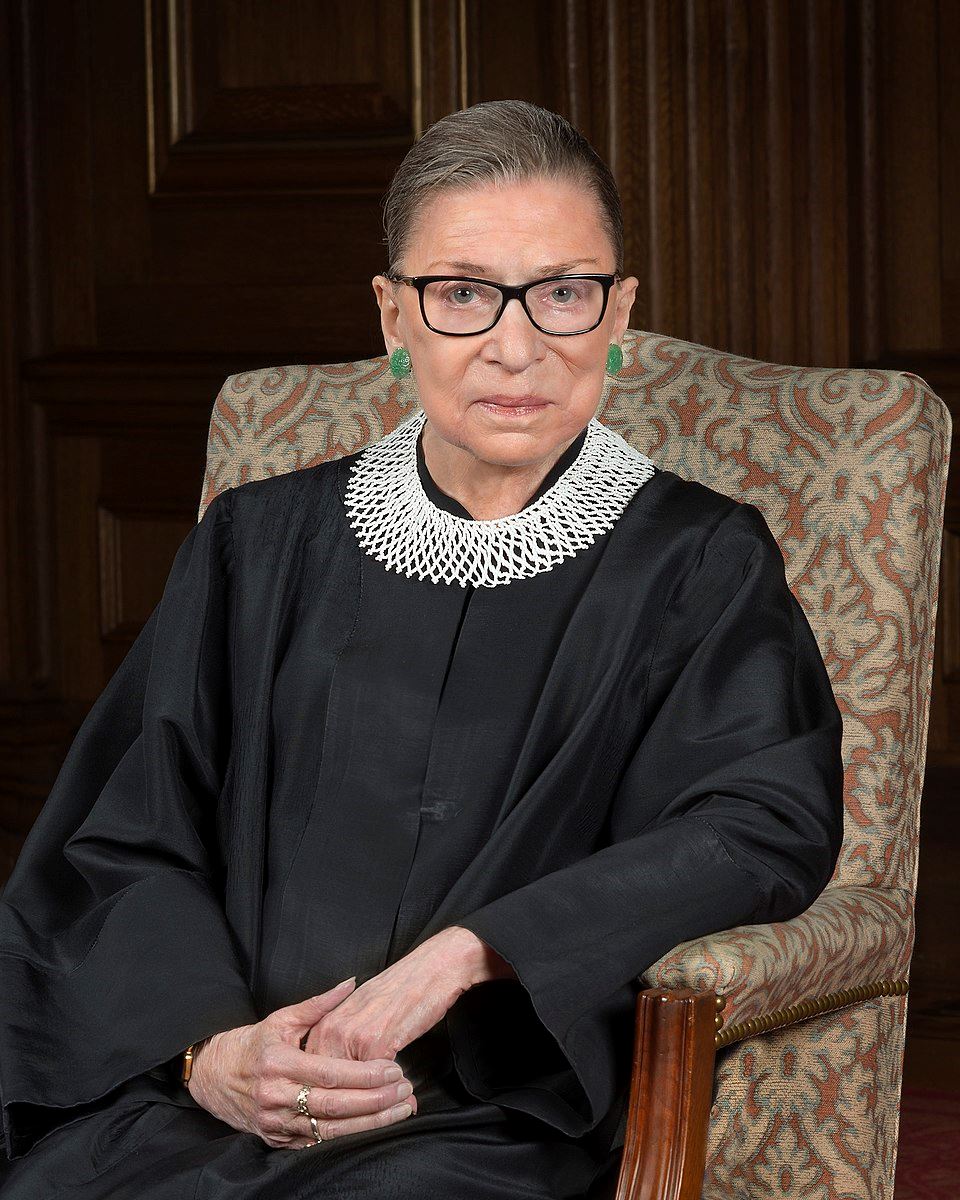 Ruth Bader Ginsburg was born in Brooklyn, New York, on March 15, 1933, and died on September 18, 2020. She was eighty-seven. Over her long life, she had many notable contributions, most prominent being her period on the Supreme Court. She was brought in on August 10, 1993, by Former President Bill Clinton. She served for twenty-seven years. Whether it be by her “Super Diva” workout t-shirt or her elephant rides in India, she had surprised us time and time again. Ginsburg has impacted the lives of so many, whether they know it or not. She has countless contributions to all of America, helping almost every group in some way. Her most notable qualities -- her accomplishments, judgement, fighting spirit, and liberal attitude -- show RBG as one of the greatest heroes of all time.

Ruth Bader Ginsburg has several recognizable accomplishments that led her in her life. This is one of the characteristics that defined her as a hero. To be a hero, a person must be able to listen, comprehend the issues at hand, and communicate the problem or a solution to others, but must also have past experiences to guide them. Ginsburg fits that requirement. She had many life experiences that defined her as a person. She received degrees at Cornell University and Columbia Law, also attending Harvard Law. She was a professor at many prestigious universities like Columbia Law School and Rutgers University School of Law. Then, she served as a counselor to many different organizations, such as The American Law Institute (Supreme Court Historical Society). This not only shows how hard-working Ginsburg was, but also her tremendous accomplishments. She had many remarkable accomplishments.

RBG was also very talented with her judgement. She was very good at picking people to keep in her life. Her talent was recognized by all of these people across her life, making it impossible not to see. It is also shown by the people with whom she surrounds herself. Some important figures were her husband, who always supported her in all of her fights. Another figure was her mother. She always told Ginsburg to “...be a lady. And, for her, that meant being your own person. Be independent” (Chittal). The fact that Ginsburg surrounded herself with people who supported her shows how far she would go. They spent their life reflecting their knowledge onto her. These, and many others, reflected on Ginsburg and acquired judgement that was undeniable. From the people in her life, we see reflected an incredible judgement of what’s right and wrong. 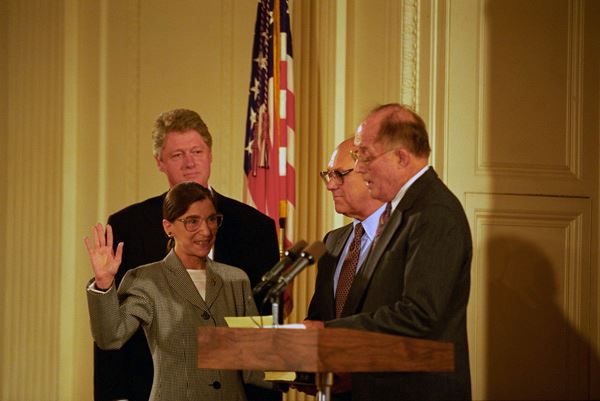 Ginsburg being sworn in as a Supreme Court Justice.https://commons.wikimedia.org/wiki/File:Photograph_of_President_William_J._Clinton_Attending_the_Swearing-In_of_Judge_Ruth_Bader_Ginsburg_as_Associate_Supreme_Court_Justice.jpgBeing able to fight for yourself and others is a very important characteristic of a hero. When a hero can fight for themselves, they can, in turn, fight for the people around them. Ginsburg was not afraid to advocate for what she believed in, on and off the Supreme Court. Her nickname is even the Notorious RBG, a name that alone should tell anyone what a fighter she is. Lots of instances in her life show her fighting spirit. First, in her Harvard Law class, there were 552 men, and she was one of eight women. The ratio is quite frightening, and it shows how much she had to fight to get her voice heard. Also, when she became a Supreme Court Judge in 1993, she was only the second woman to serve on the bench. One thing that she said was, “If you are neutral in situations of injustice, you are on the side of the oppressors'' (Klevin). Something admirable about her fighting style was that, even when she was angry or upset about what was being said, she still reacted and responded in a dignified manner. Responding in this way, I believe, makes an opinion better received and more believable. “Fight for the things you believe in, but do it in a way that will lead others to join you.” She is admirable for her fighting spirit, which gave her the ability to fight for so many people, not just herself.

Ginsburg’s fighting spirit was encouraged by her values. The last heroic characteristic that is important in a hero is a liberal attitude. Liberal means someone is willing to accept other behaviors or opinions. A hero should be able to step into someone else’s shoes and understand their feelings. It is important to me because it shows the person comprehends the conflicts of others without needing to feel it themselves. RBG embodies these values. She was not only a feminist champion, but also fought against racism, for LGBTQ+ rights, voting rights, choice of abortion, and many other notable causes. For example, she fought for the choice of a woman to have an abortion. “The decision of whether or not to bear a child is central to a woman’s life, to her well being and dignity. It is a decision she must make for herself. When the government controls that decision for her, she is being treated as less than a fully adult human responsible for her own choices'' (Waxman). RBG did not go through these struggles herself, but she is still willing to help women who were put in these circumstances. Another example is she fought against racism, specifically in voting rights. In the case of Shelby County v. Holder in 2013, the county wanted to get rid of the Voting Rights Act, which forced federal approval before changing voting rights. Shelby County called it “outdated.” RBG responded with this: “Throwing out preclearance when it has worked and is continuing to work to stop discriminatory changes, is like throwing away your umbrella in a rainstorm because you are not getting wet” (Tensely). She was always fighting for others, even when she couldn’t relate. Last, she fought for LGBTQ+ rights. In the Romer v. Evans case in 1996, Colorado had refused to recognize the LGBTQ+ community as a protected class and made a law to confirm it. The supreme court took up this case and was able to dismiss the law. She said this during the trial: “The amendment seems inexplicable by anything but animus toward the class that it affects; it lacks a rational relationship to legitimate state interests” (Baume). RBG is constantly fighting for other people, protecting their rights, and speaking against those who seek to deny them. This exhibits her liberal attitude towards anyone and anything that was treated with injustice.

It is clear that for so many reasons RBG is a hero. Each of her characteristics mentioned define it so. Her accomplishments, judgement, courage, and liberal attitude will be remembered for generations to come. She left this world a better place than she entered, whether it was in public, with her place on the Supreme Court, or in her private life, with her husband, children, and grandchildren. She is one of my greatest role models, and, even with her gone, she has taught me and others so many valuable lessons. She made sure until her dying breath that even people that were different than her, by race, sexuality, gender, or religion, that everyone had the right to be who they are.