Stephen Hawking was a visionary theoretical physicist in the field of general relativity and the theory of 'black holes.' He was the author of the popular scientific book, A Brief History of Time, which discusses the nature of the universe. In 1999, he received the Julius Lilienfeld Prize. The popular feature film "The Theory of Everything, starring Eddie Redmayne, was made about his life. He was beloved by many not only for his brilliance but his sense of humor. He passed away on March 14, 2018. My Hero celebrates his life, and for his gift of being able to explain to the public the mysteries of the universe.

by Jeremiah from Joplin

"...our image of the universe today is full of strange sounding ideas, and remarkable truths. The story of how we arrived at this picture is the story of learning to understand what we see."

Heroes are people who can overcome, or help others overcome, fear. They are people who will dash into a burning building to save someone or dive into shark-infested waters. The hero I write about is someone who just lives his life the way it is. He has faced terrible problems and has become, without meaning to, part of the beginning of a new scientific era.

My hero is a person whose greatness sneaked up on the world. Stephen Hawking was born exactly 300 years after the death of Galileo. Although there were thousands of other people born that day, he was special. As a child he was always a bit too clumsy and a bit too smart. But he had no idea how these two things would shape his life; his clumsiness was to become a crippling disease and his smartness a great intellect. He had no idea that he would have to overcome great fear and at the same time be celebrated as one of the world's smartest people.

After high school, Hawking started showing the effects of his disease. He steadily grew crippled from Lou Gherig's Disease, and after a while he was bedridden and incapable of walking. Several times he caught serious cases of pnuemonia. His second serious case required a tracheostomy which, along with saving his life, took his voice. He was in the middle of writing a book with no way to write or communicate except by blinking. Fortunately, he loved his work so much that he continued on with it despite the ever-clinging fear of dying.

Several years went by while Hawking had the daunting task of enduring his illness while keeping up with the world of quantum physics. Eventually, he received a present from a college friend. The present was a revolutionary new computer that attached to his wheelchair and would talk for him. He now had a way to write his papers and lecture to students. It seemed that his life was now getting better. He had overcome all fears of dying and not being capable of continuing his research.

After years of struggling with fear, he overcame it. Some may say he is a unique person with an extraordinary mind. In my opinion, he is a hero. He may not have saved someone's life, but he did inspire mine. And if you don't mind, he will always be my hero.

The following text is from the Stephen Hawking page of the NASA website 'StarChild.' Check it out!

Stephen Hawking was born in Oxford, England on January 8, 1942. At the age of 17, he enrolled at University College, Oxford. He wanted to study mathematics, but resorted to the study of physics when math was unavailable. He pursued a Ph.D. in physics despite being diagnosed with amyotrophic lateral sclerosis while at Oxford. This disease is progressive and slowly affects the nerves supplying all muscles in the body. In 1985, he became ill with pneumonia and since that time he has required 24-hour nursing care. Through Dr. Hawking's incredible determination and with the help of family and associates, he continues to work. In 1970, he began work on the characteristics of black holes. As a result of his research, Dr. Hawking predicted that black holes emit radiation in the X-ray to gamma ray range of the spectrum. In the 1980s, he returned to an earlier interest in the origins of the universe and how quantum mechanics may affect its fate. He has co-authored many publications such as "300 Years of Gravity" and "The Large Scale Structure of Space-time". Dr. Hawking has written books such as A Brief History of Time and Black Holes and Baby Universes and Other Essays. He continues to give lectures and seminars despite his being unable to speak since 1985. Dr. Hawking communicates with the aid of a speech synthesizer and a portable computer. He currently holds Isaac Newton's chair as the Lucasian Professor of Mathematics at Cambridge University in England. Dr. Hawking and his wife, Dr. Jane Wilde Hawking, travel extensively. Together they have 3 children. 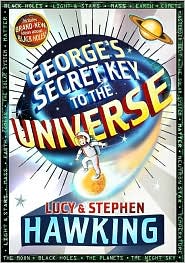 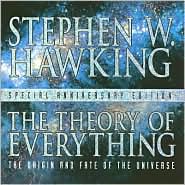 The Theory of Everything: The Origin and Fate of the Universe
Stephen W. Hawking