by Mitchell from Center Valley

Sherlock Holmes is one of my favorite heroes of all. When I grow up, I want to be able to solve the biggest mysteries in the world just like Sherlock Holmes. Detectives are really cool.

He's the greatest detective I know because he listens to every last detail when someone is talking. He can see and remember the smallest details, and he's really smart to be able to piece everything together and solve mysteries.

I like how Sherlock Holmes works for himself with the help of his partner Dr. Watson. Sherlock Holmes has solved many mysteries like "The Adventure of the Speckled Band," "The Red-Headed League," and "The Naval Treaty."

Sherlock Holmes is a pretty tall guy with black hair, like me! He has kinda big ears too, and a pointy nose. Also he is very strong. His partner, Dr. Watson, also has black hair and a mustache.

He is a hero to me because I look up to him. He is a hero detective just like my other favorites, Agent Mulder and Agent Scully from X-Files, and Dick Tracy.

Sherlock Holmes is the creation of the author Sir Arthur Conan Doyle. 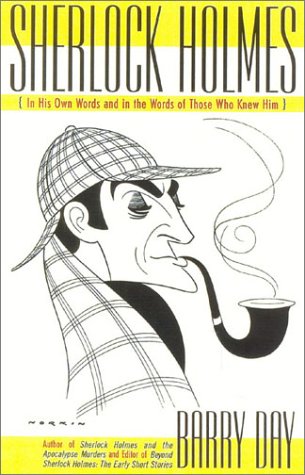 Sherlock Holmes: In His Own Words and in the Words of Those Who Knew Him
Barry Day, Editor