by THERESA from PANORAMA CITY

Who are heroes? Are they the white knights who come to save the day and run away with the lovely princess after a day of hard battling? Could they be the saviors who go up that big elm tree just to get your kitty down? How do you portray a hero?

To some, they might believe the medals you wear or the trophies you receive make you a hero. Others may disagree and say a hero can be, as well defined as, a mentally challenged young girl. You may think to yourself, how is that heroic? Being a hero can be expressed as having endurance, stamina, power, and might. Of these characteristics, Samantha had the will to carry on, which makes her a hero in my eyes.

On January 3rd, 1994, a young girl named Samantha Marie Rowlands was born. Samantha was born mentally challenged. This would further impair her later on in life. Although difficult to accept that their daughter had such a diagnosis, Samantha's parents continued to be her sole support.

As the years passed, Samantha's life grew increasingly difficult. She soon learned the harsh realization that the world would not be as accepting of her as her parents. Children did not seem to understand why Samantha was different. Teasing and loneliness were now a big part of Samantha's life. With all this occurring, she never seemed to give up. In fact, she did not seem to comprehend the words, "I can't."

When Samantha was 5 years of age, she was determined that she was going to learn how to read just like everyone at school. Doctors told her parents otherwise and said that Samantha would not be mentally capable of learning how to read at the same rate as other children. But Samantha was determined and asked her parents if they would get her a tutor. (Now this is where I come into the story.) One of my teachers asked me if I would help him in a tutoring program for young children with disabilities. How could I say no?

It was a Thursday when I met Samantha at the tutoring center. She wore a pink dress (that later she stated that she hated) and had the cutest little smile any child could ever have. I was a little taken aback and afraid that I would not be able to help her. She told me about her disease and asked if I would help her learn to read.

A few weeks passed and I could see progress in Samantha's reading. Occasionally, she would have a fit and get frustrated. All I could really tell her was to breathe and look at the words again. When she did return her eyes to the page, I would ask her what the word looked like. She would, at times, laugh at me because she thought maybe I was the one who needed the help, not her. Once we looked at a picture book and we sounded out the words as usual, though this time it was different. Samantha was so interested in a picture that she hardly looked or wanted to look at the words. The picture was of a beautiful little angel.

Samantha studied this angel harder than anything I had ever seen her do before. She said she would go home and look at the picture over and over. I spoke with her parents about her progress and asked if they noticed her infatuation with the picture as well. They had noticed and said that Samantha wished she could have wings just like the angel. She wanted wings to carry her spirit and hoped others would look at her as if she were beautiful too.

As not only her tutor, but now a friend, I was deeply moved. After this, I tried to find any angel book I could for Samantha to read. She really seemed to enjoy me doing this for her. Her reading seemed to just come naturally now, as if some little angel was helping her, and me. She giggled when I told her this and told me she did have a little angel helping her. I asked her how she knew and she would only smile. Samantha then took my hand and pointed back at me and said this is the angel I told you about.

Samantha Marie Rowlands is now 9 years of age and is still a big part of my life. She is reading almost two books a month and is at the top of her class. To this day, I still help her, though it seems she just wants me to keep bringing her angel books. Doctors are still dumbfounded when they see all that Samantha has accomplished. She told me her next goal in life is to become an angel, just like me, for someone else.

Samantha has inspired me to be a better person and to never look at an angel the same way ever again.

Study Guides and Strategies - This Web site gives tips on how to be an effective tutor. 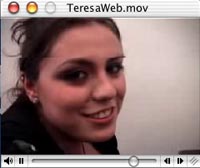 Watch as Teresa explains why Samantha is her hero.