Sandy Hook Promise: School shootings don’t have to be inevitable 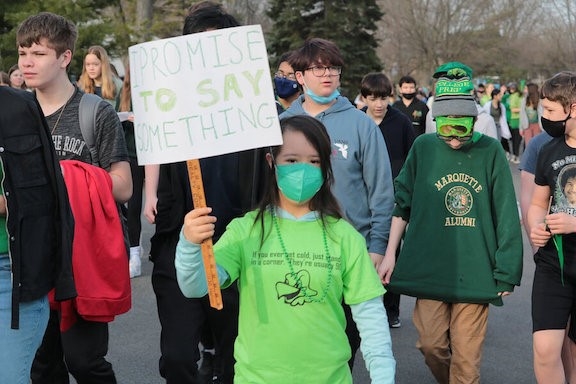 Nicole Hockley and Mark Barden understand the terrible grief that follows a school shooting. They each lost a young son nearly a decade ago in the massacre at Sandy Hook Elementary School in Newtown, Connecticut.

Their mission since then has been to prevent attacks and “choose love, belief, and hope instead of anger,” as they write in the vow central to the Sandy Hook Promise Foundation they co-founded in 2013. They focus on turning tragedy into transformation through conversations and action; the foundation offers free school programming to decrease bullying and train students how to report potential threats.

Tuesday’s attack at Robb Elementary School in Uvalde, Texas, which killed 19 children and two teachers, underscored for them the importance of these initiatives, which have thwarted at least nine school shootings and nearly 300 suicides, according to the organization. Its work is grounded in a firm stance that such attacks are not inevitable – nor should they be accepted as a normal part of life in America. At a moment when efforts to stop mass shootings in schools can seem futile, the successes of the Sandy Hook Promise suggest that consistent efforts can prevent attacks and bring some restoration to lives devastated by violence.

“There have been so many instances of prevention,” said Ms. Hockley, CEO of Sandy Hook Promise, during a press conference on May 26. “If you fall into that apathy, that sense of hopelessness, then you’re not going to take any action, and yet we need everyone to be leaning into the action.”

The United States has the highest rate of gun ownership among developed nations, and the highest amount of gun deaths. 2021 set a record for the most school shootings since 1970, with 249 incidents, including active shooters and times when a gun was drawn but no shots were fired, according to the K-12 School Shooting Database.

Sandy Hook Promise formed only a month after 20 students and six teachers lost their lives at the Connecticut school in a day tragically similar to the events of Uvalde. A 20-year-old gunman killed his mother at home and then went on a rampage at the school. The foundation offers two signature programs, “Start With Hello“ for K-12 students and “Say Something“ for grades six and up. The programs are based on school violence prevention research showing that most school shooters were bullied and left warning signs before committing atrocities.

“The Sandy Hook programming comes from a place of compassion and empathy as they try to find ways to mitigate school violence,” says Kjersti VanSlyke-Briggs, a professor of secondary education at SUNY-Oneonta and co-editor of “A Relentless Threat: Scholars Respond to Teens on Weaponized School Violence,” which includes a chapter about Sandy Hook Promise. 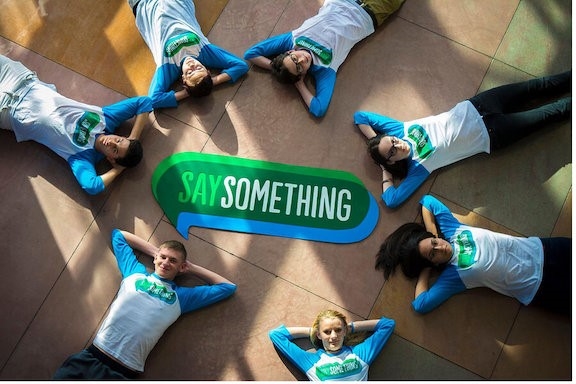 Students from East Valley Institute of Technology in Mesa, Arizona, circle around a sign of the Sandy Hook Promise's "Say Something" logo. The program trains students how to report worrisome behavior.Sandy Hook Promise

“Start With Hello” has reached 8 million students so far and helps kids start conversations with their peers and recognize signs of social isolation.

“Say Something” instructs older students about warning signs peers may show if they’re contemplating violence, and tells them how to report this to school staff. Some schools also participate in an anonymous reporting system developed by Sandy Hook Promise where students can submit tips through an app, website, or phone line. Some 82,000 tips have been collected nationally through schools that have adopted the reporting system.

La-Shanda West, a teacher at Cutler Bay Senior High School outside Miami, Florida, says she’s seen the impact of Sandy Hook Promise programming at her school. Students run an annual “Start With Hello” week where they pick activities like leaving kindness notes on each other’s desks and rotating tables at “mix-it-up lunches.”

School announcements also remind students to “say something” when they’re concerned, and to be an “upstander,” not a bystander. A popular student club she advises that’s affiliated with Sandy Hook Promise runs an Instagram page where they post about warning signs and communicating with trusted adults.

Both programs have helped create a welcoming school culture at Cutler Bay, and were especially helpful after students returned to school isolated after extended virtual learning due to COVID-19, says Ms. West, who teaches business.

The training may have also helped mitigate a threat. Ms. West received a message this school year from a student who shared a student’s online post about bringing a gun to school, which she quickly reported to local police.

“These programs are critical in terms of empowering students to be upstanders and informed to act when they see a threat,” she says.

For Mr. Barden, a co-founder of Sandy Hook Promise whose son Daniel was killed in the attack, a “catalyst moment” occurred in 2015 when he received news that an imminent school shooting had been averted in Ohio after a student and counselor picked up on warning signs they said they would have overlooked without their training.

“I still get goose bumps talking about it,” Mr. Barden said at Thursday’s press conference. “It was like, ‘Oh my gosh, we set out to prevent other families from going through the horror of living through a school shooting and we’ve done it.’ And that just catapulted me deeper into this,” with a drive to bring the programs to more schools.

Researchers at the University of Michigan are evaluating the effectiveness of Sandy Hook Promise programs and have found encouraging signs. Preliminary research from a study of the Say Something Anonymous Reporting System in Miami-Dade County Public Schools indicates that students who participate are more confident about reporting threatening behavior and more likely to report it, says Hsing-Fang Hsieh, assistant research scientist at the National Center for School Safety at the University of Michigan, who led the research team. 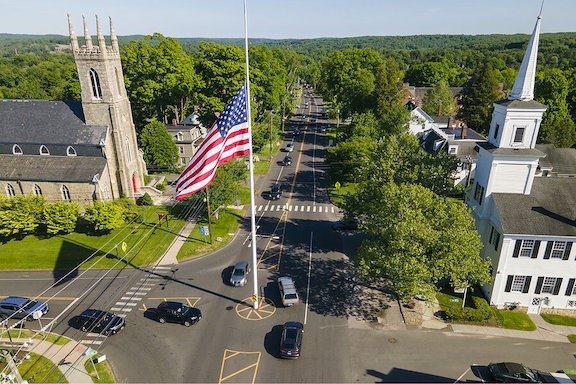 Ted Shaffrey/APAn American flag flies at half-staff in Newtown, Connecticut, on May 25, 2022, in honor of the 19 children and two teachers killed by a gunman in Uvalde, Texas, earlier in the week. It was the United States' deadliest school shooting since a gunman killed 20 children and six educators at Sandy Hook Elementary School in Newtown in 2012.

The research, funded by the Institute for Justice, a public interest law firm, also found students were slightly less likely to experience violence at school, such as witnessing bullying or seeing weapons on campus, Dr. Hsieh says. The study used a random control trial that compared sixth grade students in eight middle schools who participated in the “Say Something” program with students in 11 middle schools who did not. The research is currently under review for publication in a peer-reviewed journal.

University of Michigan researchers are also finishing a study of Sandy Hook Promise programs in the Los Angeles Independent School District through a three-year grant from the National Collaborative on Gun Violence Research.

“We’re trying to develop rigorous designs; we’re trying to collect valid and reliable information,” says Justin Heinze, director of the National Center for School Safety and assistant professor at the University of Michigan School of Public Health. “The information that we do have across these studies seems to be saying that yes, by developing this positive school climate, by educating students on how to say something and speak up or find a trusted adult, it’s having a positive effect on not just attitudes and self-efficacy to do something, but perhaps the behaviors as well.”

A work in progress

The researchers identified two potential areas for improvement: inconsistency in how schools implement the programs and understanding better how they are perceived by students of different racial and ethnic backgrounds.

Sandy Hook Promise programs are a “lovely” example of the types of inclusive programs recommended in a 2019 study of nearly two decades of research on school violence prevention, says Dr. VanSlyke-Briggs. However, Sandy Hook programs are just one piece of the puzzle, she adds.

“We need to look beyond the walls of the school,” Dr. VanSlyke-Briggs says. “This is an American phenomenon and people within our country have to solve this problem. We can’t leave it just on the role of teachers and administrators to fix.”

Christine Miller, a social skills counselor at Broadview Middle School in Danbury, Connecticut, was initially reluctant when she heard Sandy Hook Promise programming was coming to her school several years ago, hesitant to dredge up grim memories. She lives in Newtown, and her son was at Sandy Hook Elementary School on the day of the shooting.

Then she started hearing from students. “The first year I had a student make a speech saying, I’ve been scared and this is the first time I feel like I can be part of the solution,’” says Ms. Miller, who began seeing how the programs empowered youth to develop kindness and safety.

“I’m so grateful,” Ms. Miller says, “because personally I feel like it’s something that moved me forward. It’s been good for me, for the school, for everyone.”