As a foreign correspondent in the Middle East for two decades, John Wallach had already witnessed numerous instances of violent conflict. But it was the 1993 bombing of the World Trade Center that made Wallach give up journalism and change the course of his life.

Where the terrorists had instilled fear, Wallach decided, he would inspire its best antidote - hope. At a dinner party in honor of Shimon Peres, Wallach made a toast to the Israeli Foreign Minister in the presence of envoys from Egypt and Palestine. During this toast, he proposed his idea for a summer camp in the United States where young people from each of the three nations would have the chance to meet one another.

"To be nice, they all accepted, probably not thinking I was serious."

Wallach called their bluff. The next day he held a news conference, announcing that all three - the Israeli Government, the Egyptian Government and the PLO - had agreed to his plan.

With the help of partners Bobbie Gottschalk and Tim Wilson, Wallach planned the first Seeds of Peace camp. The three used their own money to initiate the project, which quickly attracted both publicity and outside financial support.

"That first summer we had 46 kids: Egyptians, Israelis and Palestinians," says Wallach.

When then-First Lady Hillary Clinton visited the camp and heard from Seeds of Peace members whose relatives had been killed, she instantly became an ally. She called President Clinton and asked him to have the children present at the September 14, 1993 agreements between Yitzhak Rabin and Yassir Arafat.

By December 1999, 10,000 Americans had sent individual donations to SOP. In 2000, SOP launched the "Balkans Initiative" to involve young people from Serbia, Bosnia-Herzegovina and Croatia, as well as a program for Turkish and Greek kids who were caught in the battle over the divided island of Cyprus.

The camp strives in every way to offer what the kids have never experienced: a neutral environment. In order to foster an atmosphere of tolerance, rituals are as inclusive as possible. On the first day, staff and campers stand outside the camp gates to raise the flag and sing the anthem of every member nation. The last flag raised is the SOP flag; the last song the SOP anthem. Campers eat together, share cabins, attend each other's religious ceremonies and participate in the same social activities. They also attend coexistence sessions at camp where Palestinians, Israelis, Jordanians, and Egyptians talk about Jerusalem, sovereignty issues, terrorism, and the settlement of disputed territories.

"We teach listening skills," says Wallach. "When you actually hear what your enemy is saying, you can begin to develop understanding and empathy for them. You need to get beyond the sense that you are the exclusive victim of the other side; no one has a monopoly on suffering. When both sides grasp that both are victims, a breakthrough becomes possible. You can actually break the cycles of violence."

Seeds of Peace does not officially espouse or direct its members to take any particular viewpoint.

"Our mission statement is pretty simple," explains Wallach. "What one side has, the other side has a right to demand for itself, whether that be statehood, security, justice or equality. We have always recognized the Palestinians as a separate entity, allowed them to fly their flag at our site next to the Israeli flag, permitted them to sing their anthem and say they come from Palestine, even though strictly it does not exist as a separate nation." His personal view of an ideal political situation is equally simple: that Israel and Palestine "should coexist just like two human beings, and our kids, just as their nations, [should] recognize and accept each other."

The camp only takes 450 kids every summer, so the selection process is competitive. Each nation's Ministry of Education notifies its own schools to select candidates, who then have to write an essay explaining why they want "to make peace with the enemy." SOP asks the parents only to pay as much of the airfare as they can, then picks up the rest of the costs. Camp is free. Wallach wanted governments involved in choosing participants because in this way they would "recognize that the peace treaty won't mean anything unless there are people on the ground who believe in peace." It also, he adds, ensures that the camp receives the "best and the brightest" through a democratic process.

In a 1999 radio interview, two Seeds of Peace members (identified only by their first names, Avigail and Bushra) talked about the ways camp had changed their lives. Avigail, an Israeli, said that "arriving at the camp was a very intense shock...no one knew how to treat each other. We came from home with a lot of prejudices that were hard to let go of."

Bushra, who had grown up in a Palestinian refugee camp, recalled that her experience with Israelis was limited to seeing soldiers carrying guns around with them. Her initial experience was one of fear.

"At first it was frightening. My heart was beating, I was looking around, didn't know what to do. I went [to camp] because my father encouraged me to go and meet the other side, hear what they want to say, and what they feel about us. It was very hard to discuss [coexistence] issues with Israelis because each side has its own historical facts...[but] I think it was important for me to hear that Israelis want to coexist with us. I couldn't have believed that my best friend would be an Israeli."

The post-camp experience presents a new set of challenges for SOP campers. They return to the world in which loyalties remain unchanged, opinions unchallenged. In order to visit her Israeli best friend from camp, Bushra found that she needed to get special permission from the government of Israel allowing her to cross the "border." She also found that her new alliances made her old friends and neighbors suspicious.

"It was very hard explaining to my friends what I did in camp," she said. "For the refugees it's hard for them to believe in peace with the Israelis."

Behind the emotional damage caused by strained loyalties lurks the ever-present danger of living with war. On October 2, 2000, seventeen-year-old Asel Asleh got in the middle of a confrontation between armed Israeli soldiers and rock-throwing Palestinians. Asleh, a Palestinian who had just returned from SOP camp, was shot and killed.

While SOP staff are barred from attending political demonstrations, the organization does not sanction its members from doing so. Asel Asleh's unexplained presence in that fatal skirmish might have aroused doubts about his devotion to peace, but his Israeli and Palestinian friends voiced no such doubts, eulogizing him in the highest terms on the SOP Web site. The unfettered response to Asleh's death testifies to the quality of the friendships forged at camp. The tragedy itself, on the other hand, points up the need for maintaining a strong network of former campers.

"The support system is enormously important," says Wallach. A 5000-square-foot Center for Coexistence in Jerusalem, with a permanent staff of eight people, now actively fosters continued relationships among former campers. The center offers workshops, reunions, and drama, art and photography classes taught by both Israeli and Palestinian teachers. Staff members also help the kids obtain permission to travel across hostile borders to visit their new friends. At Seedsnet, a secure Web site, kids can communicate with each other. SOP also puts out a monthly newsletter, The Olive Branch, and holds a youth conference every year.

What has most surprised Wallach is "how much the rest of us can learn from these kids. Those who live with terror every day...are far more mature than American youth." He hopes that one day an Israeli and Palestinian will graduate from the Seeds of Peace program, become elected leaders, and return to the SOP camp in Maine for their first summit meeting.

"All of them are capable of leading the rest of us. That's the biggest surprise. We don't spend enough time listening to [youth] and allowing them to lead."

On November 9, 2001 Seeds of Peace hosted a conference in New York City on the roots of terrorism. Over 150 attendees from 22 Balkan and Middle Eastern countries spent five days discussing the causes of terrorism. They then drafted a charter outlining ways to prevent terrorism and presented it to UN Secretary General Kofi Annan at a concurrent meeting of the UN General Assembly.

It is unclear whether or not this charter will directly impact Middle East politics. What is undeniable, however, is that by giving people a chance simply to create this document, John Wallach has already succeeded in his goal of offering hope. As Avigail says, "The important thing is not the treaties that are signed at camp but that people go through this experience. Once you go through it you can't let it go, because you have seen a reality that could be the reality back home. We come back from camp with so much motivation, and so much belief [in] peace."

Seeds of Peace - The official web site, with news, links, and photos.
US Institute of Peace
The Centre for Peace in the Balkans

In his book The Enemy Has a Face, John Wallach writes about the accomplishments of Seeds of Peace, and the hope that this project has engendered.

Bushra and Avigail were interviewed in 1999 by Diane Rehms on the Washington D.C.-based radio program "The Diane Rehms Show." 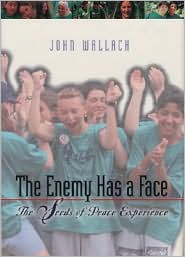 Enemy Has a Face: The Seeds of Peace Experience
John Wallach, Michael Wallach

On July 10, 2002, Seeds of Peace Founder and President John Wallach died of cancer. Janet Wallach, who accepted the role of Interim President, wrote in an August letter that "John fought the disease as courageously as he fought for peace."

In January 2003, Aaron David Miller became President of Seeds of Peace. Miller is a scholar and historian specializing in the Middle East and over the past twenty years has advised six Secretaries of State on Middle East policy.

Read an exclusive My Hero interview with two Seeds of Peace members!