She overcame bias as a woman in science. Her memoir is testimony.

Lindy Elkins-Tanton, lead scientist for NASA’s Psyche mission, describes challenges and successes in “A Portrait of the Scientist as a Young Woman.” 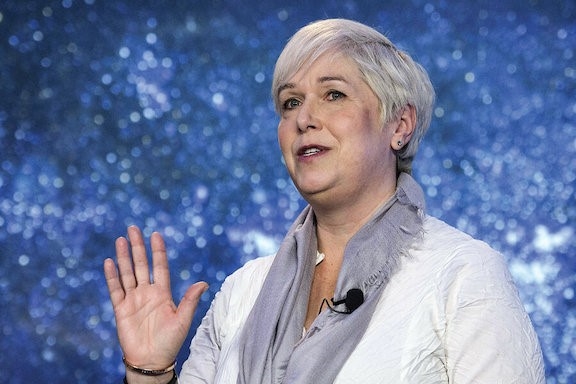 Lindy Elkins-Tanton is the author of "A Portrait of the Scientist as a Young Woman."Bill Ingalls/Zuma Wire/Newscom/File

When Lindy Elkins-Tanton applied to the Massachusetts Institute of Technology, the high school math teacher who wrote her recommendation told her, “You’ll never get in.” She proved him wrong, but throughout an extraordinary career in the planetary sciences she has often been made to question whether she, as a woman, belonged. In “A Portrait of the Scientist as a Young Woman,” Dr. Elkins-Tanton chronicles her traumatic childhood, the solace she discovered in scientific inquiry, and her achievements. In addition to being the vice president of Arizona State University’s Interplanetary Initiative, she is the principal investigator of NASA’s Psyche mission, an 11-year, $800 million effort by a team of 800 to launch a spacecraft to explore the massive asteroid Psyche. The launch is expected sometime in the next two years. She spoke with the Monitor recently.

How did you deal with being made to feel like an outsider as a woman in science?

It was interesting for me to see those experiences add up as I was writing the book. In some places those words really stuck with me, like with my math teacher: “I must not be good at math.” It’s something I rail against – why is it OK to say girls aren’t good at math?

You worked in business for eight years before returning to MIT for your Ph.D. in geology and geophysics. How did your early management consulting experience inform your work in science?

Everything that people do is about people working together, no matter the topic. So thinking about how we can work together best is always fruitful. Trying to create change in teams has been instrumental in helping me get where I am in my career.

Asking questions is often seen as a sign of weakness. How did you make it a strength?

When I started taking science in high school and college, we worked from textbooks that make it sound like we’ve got all the answers. But most of those things will be proven wrong or updated in some way over time. There are way more questions than answers. Realizing that was very freeing. If there are many more questions than answers, then all of us have so much we can do to contribute to the progress of humanity.

You say that gender-based bias became more pronounced as you rose in leadership in academia. Are you hopeful that biases about women leaders can be overcome?

I am. I think we’re making slow progress. It surprised me that I experienced so many more overt problems based on gender as a leader than I had previously. But it began to make sense – I was trying to join a smaller and smaller club, and people like the people in their clubs to remind them of themselves. It could be gender or race or socioeconomic status or whatever. If you’re different, you’re less likely to be welcomed in.

You’ve overseen sexual harassment cases. What did those experiences teach you?

The way to make a workplace with less bullying and harassment is to have the determination of people in the ranks to report harassment and to hold leadership responsible for taking action. You also have to have leadership that is clear about their ethics and their responsibility to create change. You need both those things to create a better organization. Making that magic combination is the challenge.

Are things easier for women today?

Yes. Especially at the undergraduate level there’s more gender balance across the sciences, although parts of engineering are still lagging. My undergraduate experience ... set me on a path that I appreciate immensely. But all of us had bias to overcome. It’s not that we don’t have implicit bias now, but it was a little more explicit then.

You write about struggling with depression and anxiety in the past. Has thinking about the vastness of the universe affected your perspective on your own problems?

For some people, beginning to understand the vastness of the universe is terrifying and makes them feel like they’re floating in a void of meaninglessness. For others, it’s incredibly comforting that there’s so much more out there and that in the very long run, maybe our individual pain in this moment is smaller than it feels. To me, it’s very comforting.