She survived an atomic bomb. Now she campaigns against them.

Setsuko Thurlow survived the atomic bombing of Hiroshima. Now, she devotes her life to revealing the human effects of nuclear arms and ensuring that nuclear events are not forgotten – or repeated.

JANUARY 20, 2020 - MEDFORD, MASS. - Setsuko Thurlow can’t give her testimony without feeling some amount of pain. Telling her story involves reliving memories of fear and shock, losing loved ones and nearly her life. But it’s also the only thing she can do to honor those who died. Giving her testimony is hard, she says, but she feels she has no choice. It is her “moral obligation” to tell it. 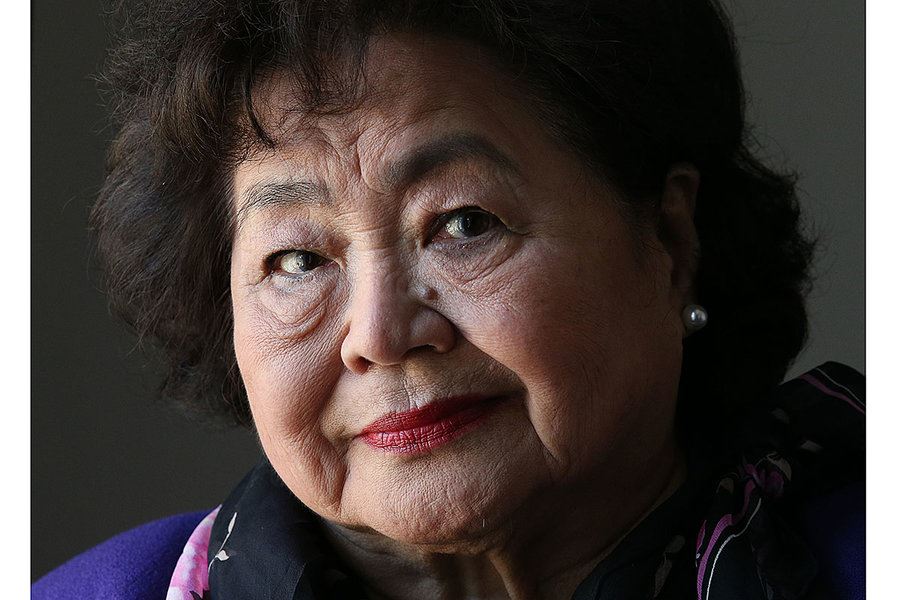 Hiroshima survivor Setuko Thurlow, seen her ein Edinburgh in May 2016, during a campaign against nuclear weapons, advocates against nuclear armament. Ms. Thurlow was 13 when American forces dropped an atomic bomb on her home city in August 1945.Andrew Milligan/PA/AP/File

Ms. Thurlow is a hibakusha, an atomic bomb survivor. More than a mile outside Hiroshima, Japan, when the first atomic bomb was dropped on the city, she survived without major injuries but would never be the same. She didn’t know it then, but telling that story would become her life’s purpose.

An activist for decades, Ms. Thurlow has repeated her testimony to students, teachers, politicians, the pope – anyone, she says, who will listen. Advocating for nuclear disarmament has taken her around the world, from Hiroshima to the United Nations General Assembly in New York to Oslo, Norway, where in 2017, she accepted the Nobel Peace Prize on behalf of the International Campaign to Abolish Nuclear Weapons (ICAN).

Almost 75 years after the bombing of Hiroshima, this may be the last generation able to hear directly from hibakusha. Ms. Thurlow says she feels an urgency to tell her story while she still can.

“Most atomic bomb survivors do not share their story. It’s simply too painful,” says Kathleen Sullivan, head of ICAN’s Hibakusha Stories program, which brings survivors to speak in New York public schools. “For those that do, it’s very, very important that especially in these closing moments … we who have the opportunity can hear their firsthand witness and inculcate that into our own lives.”

“The world was ending”

Ms. Thurlow’s testimony begins on a Monday morning on the outskirts of Hiroshima on Aug. 6, 1945. She was one of around 30 students tasked to decode messages for the Japanese military, and it was her first day on the job. She was 13, new to the eighth grade. 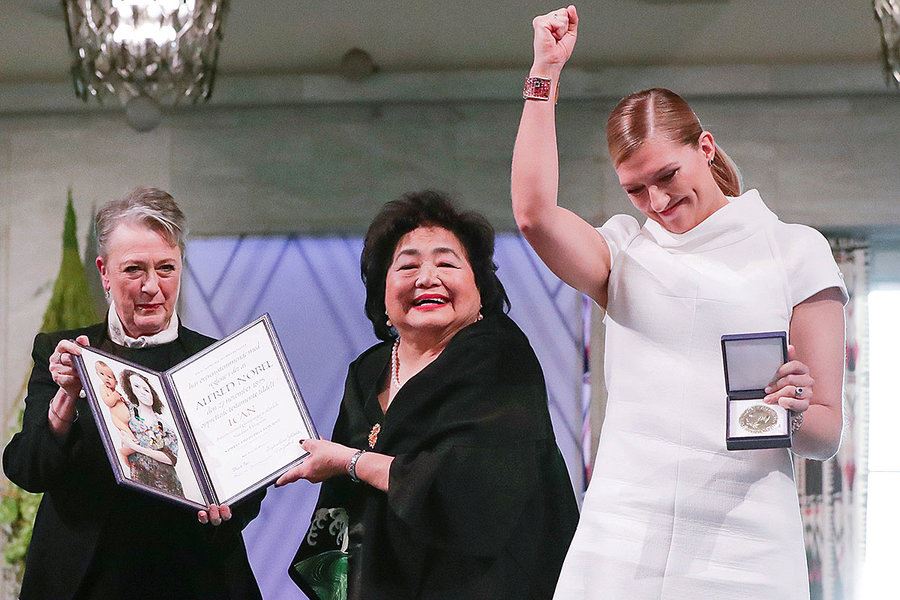 At a quarter past eight, she saw a bluish-white flash out the window. She felt like she was floating. She passed out and woke up trapped under rubble. The morning now looked like night because of the dust and smoke in the air. She thought the world was ending.

Someone – she doesn’t know who – pulled her from the wreckage, and she found her way to a field filled with survivors. Later she found family members, including both her parents, who survived the blast. They were able to stay at her uncle’s house outside the city, where life went on.

It wasn’t until years later that Ms. Thurlow’s activism began. After finishing university in Japan, she traveled to Virginia in 1954 to study sociology at the University of Lynchburg. That same year, the United States had tested the Castle Bravo nuclear bomb – estimated to be 1,000 times as powerful as the one dropped on Hiroshima. Ms. Thurlow says the new weapon upset her and many of her Japanese peers.

“We made a vow that we are not going to [forget] our school friends, loved ones, all those hundreds of thousands of people who perished in that bombing,” she says. “We’re not just going to abandon them. We want to make sure that their death has some meaning.

A week after entering the U.S., she says, she gave an interview opposing the nuclear test – only to receive hate mail in the days after. “If you don’t like this country, why don’t you leave?” she says people wrote. But to her, respecting those who died in Hiroshima meant telling her story.

After marrying and spending decades as a social worker in Toronto, she partnered with ICAN in the mid-2000s. On behalf of the organization, she spoke to world leaders at U.N. summits and was crucial in the 2017 adoption of a treaty prohibiting nuclear weapons, Ms. Sullivan says. The treaty requires 50 ratifications to take effect; it has 34 so far.

Part of what makes Ms. Thurlow’s testimony so powerful, says Ms. Sullivan, is her command of English. But the story itself, she adds, empowers its listeners. In a post-Cold War world, Ms. Sullivan thinks young people in particular tend to either ignore nuclear weapons or accept them as inevitable. Ms. Thurlow fights that assumption.

“A story of hope”

During a recent talk at Tufts University’s Fletcher School of Law and Diplomacy in Medford, Massachusetts, Ms. Thurlow speaks to a crowd of nearly 100 students. For an hour and a half, they listen silently, phones away and eyes attentive. At the end, they give her a standing ovation.

“I am so concerned [that] when people talk about nuclear weapons it’s something ancient that happened a long time ago, far away from real life,” Ms. Thurlow tells the crowd.

“So I thought by sharing my personal experiences that will help you to appreciate and understand the nuclear weapons issue perhaps more sensitively, with a greater degree of empathy.”

Miyako Kurosaki, a student who helped organize the event, had met Ms. Thurlow before while working as a journalist in Japan. Since arriving at Tufts, she says she’s wanted to invite a hibakusha to the university.

Every issue has two sides, says Ms. Kurosaki: above the crowd and under the crowd. The first involves abstract theory, which students get in the classroom. The second involves an issue’s human impact. She says students rarely get to see “under the crowd” with nuclear weapons, which is why she wanted Ms. Thurlow to come. In Ms. Kurosaki’s opinion, people can’t make informed decisions on nuclear weapons without seeing their effect on humans themselves.

“[Students at the Fletcher School] want to be a policymaker in the future,” says Ms. Kurosaki. “So I wanted to share this particularly: The nuclear weapons issue has a humanitarian perspective.”

During the Q&A after the talk, a member of the audience called Ms. Thurlow’s testimony a “story of hope.” Ms. Thurlow says she finds her own hope in the people she speaks to, even those who disagree with her. Advocating for nuclear disarmament – a mission with frequent setbacks – takes resilience. She says she didn’t learn that resilience from surviving the bomb itself, but from an experience a month later, when a typhoon hit Hiroshima.

She got caught in the rains and flooding one day coming home. When she arrived, she threw herself on the floor and moped: “Why did this have to happen to me? First an atomic bomb and now this typhoon?”

She expected comfort from her parents, but her father – not usually one to scold – was stern. “You are alive, you have life,” she says he said. “You have your parents. You have a roof over your head. What more do you expect?”

That electrified me, really,” she says. “That shocked me, forced me to think, ‘Yeah, I am alive,’ although I have been just surrounded by death and misery. But I guess it never got through to me, into the core of my being. At that moment I am alive. I’m going to live.”