A true hero sets themselves up as a role model by demonstrating good deeds. This idea of being a personal hero to someone is often lost in our media, which tends to prefer a dramatized story to an intimate and heartfelt one. As a young kid, I was never introduced to the whimsical world of flying superheroes who battle their evil arch-nemeses like many children are today. Instead, I had picture books. One of the scenes that I read, which I distinctly remember, occurred in the book series Clifford the Big Red Dog. In the scene, Clifford spots a cat who is ready to attack a group of unsuspecting birds and makes a spur-of-the-moment decision to suck up the cat with a construction pipe and save the birds. Books like these first taught me the term “good deeds.” I learned about the neighborhood heroes, who help peoples’ cats out of trees and help the elderly cross busy streets. An everyday hero shows us that we do not need superpowers to do good. 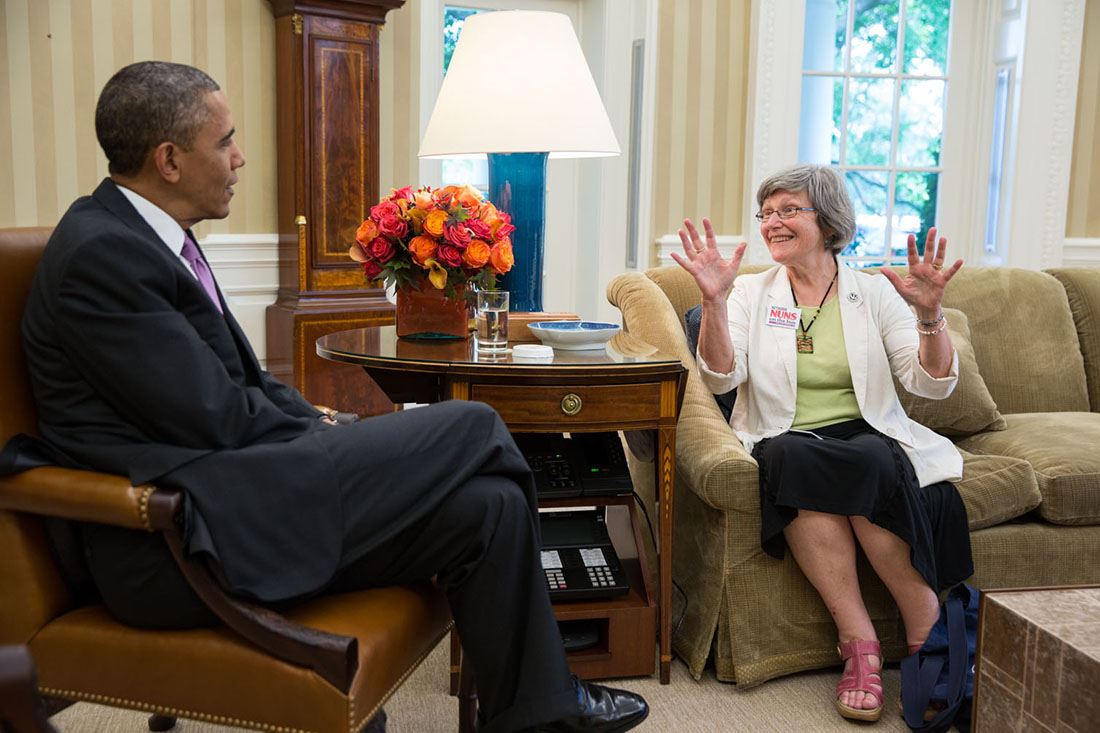 Simone Campbell with (then) President ObamaOfficial White House Photo by Pete Souza [Public domain]Simone Campbell, who is technically a Catholic Sister, not a nun, has shown her heroism throughout the course of her life. Campbell was born on October 22, 1945, and advocates for social justice as the executive director of NETWORK, an organization founded by a group of Catholic Sisters after Vatican II (an assembly of all bishops in the Roman Catholic church), which readjusted many of the Catholic church’s policies from 1962 to 1965. She has done many things to help others, like becoming a lawyer to help those in need and going on a peace mission in Iraq, but has mainly gained her fame from the “Nuns on the Bus” tour. The tour visited nine states in the U.S. and was created with the purpose of having Catholic Sisters speak out against a Republican Party federal budget proposal. The proposal suggested to privatize Medicare, adjust Medicaid to inflation and population growth, and to repeal 2010 health care legislation. Sister Simone was also able to speak at the Democratic National Convention about the budget proposal, which she felt would be detrimental to families living in poverty. Today, many question NETWORK’s decision to delve into politics and integrating it with religion. However, the sisters view their work as a duty that goes with religion, with Campbell saying, “The gospel demands us to go where there are needs. And when you touch the pain of the world, it releases hope into the darkness” (“Radical Grace”). Campbell has established herself as a person who deeply cares for other people. In order to have better interaction with others, she controversially chooses not to wear the traditional nun garment called a habit. Sister Simone demonstrates goodwill in her longing for the welfare of all people and demonstrates her dedication by balancing what she holds dear to her: her faith and her activism. Through all of this, she remains humble and maintains her status as a role model. Simone Campbell is a hero whose goodwill, dedication, and humility give people hope for the world and motivate them to follow through in supporting what they believe in. 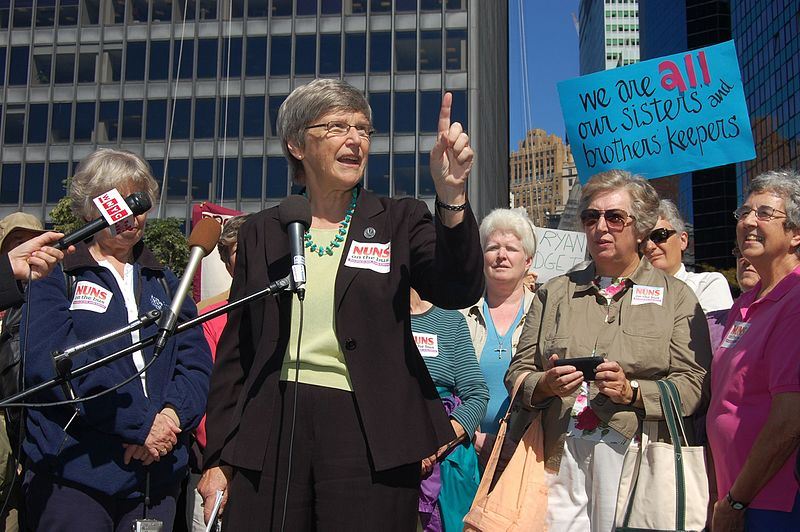 Simone Campbell "Nuns On the Bus"Thomas Altfather Good [CC BY-SA 4.0] via WikimediaSimone Campbell’s goodwill faces off with modern cynicism and shows us that goodwill can be authentic, without skeptical motives or goals. In her own memoir, Campbell shares that a peace mission that brought many American Catholic organizations to Iraq exposed her to the horrors that its citizens were going through. Along with others on the mission, she read aloud a letter in a Baghdad church that expressed the group’s politically controversial thoughts on the possibility of war: “But war will never protect us--it will endanger the entire human family. A war against the people of Iraq will slaughter thousands of innocent men, women, and children in a land already devastated by sanctions. A war could also kill and injure countless young Americans” (Campbell 59). Even if many have differing opinions on the choice of war in Iraq, Sister Simone undoubtedly cares for the welfare of all people because she makes her decision based on her desire to protect them. What we want is to be understood, and Simone Campbell uses her empathy and goodwill to try to make that happen. Showing that others care about us gives us more faith in the world, changing our perspectives and impacting our lives. Her quest for fairness for those who we often overlook reflects this empathy. She has pushed for the full funding of the U.S. Census, stating in 2016 that “the nuns would like to see the counting work fully funded and an effort made to count everyone, including the homeless and immigrants. Only then can congressional districts be drawn accurately to ensure all people receive equal representation” (“Technically not a nun, and no bus, but sister brings her message to King's”). In aspiring for this equal representation, we can see that Sister Simone does not think that taking economic fairness into account is a chore, but something that is a necessity to ensure that everybody has a chance of prosperity. For her, the question is not “why should I help,” but “how should I help.”  She is not only making a difference in many of our lives, but she is also showing us that we have support, that there is someone there for us. Sister Simone becomes a motivator and role model for many people. Because of her goodwill, Simone Campbell displays herself as a hero that supports and cares for everyone.

Sister Simone’s dedication allows for her to balance her activism and religion. She reveals that her undying love for activism started when her sister was diagnosed with the then-incurable Hodgkin’s disease (Hodgkin’s lymphoma): “It just seeped into my bones, this sense that I needed to live intensely enough for both of us, to channel her passion as well as mine. As she grew weaker, my commitment only grew stronger. This wasn’t a conscious process for me, at the time or since” (Campbell 13). The reason why Campbell now feels so strongly attached to her causes is because of her personal experience with her sister, which gives her a strong incentive to persevere with her advocacy. Her perseverance gives many people motivation to follow through with their own goals, making her an inspiration. However, through everything, Sister Simone continues to stay dedicated to her faith. In the television documentary “Radical Grace,” she addresses the creation of the Second Vatican Council in which changes were made to the Catholic church based on the norms at the time, and shows its effect by saying, “We went from obedience in the military model, just doing what you’re told, to understanding that religious obedience is about listening. And listening deeply to the needs around us and then acting out of that deeper understanding” (“Radical Grace”). Sister Simone is able to use the impact of religion on her to follow through in her hopes for the world. Following through in her hopes because of her faith exemplifies her dedication to Catholicism, and sets an example of devotion for everyone, Catholic or not. Sister Simone’s dedication gives her the makings of a hero.

After all of her accomplishments, Campbell has retained humility. She gives herself some credit but also credits others when it is due. When she addresses her transition from law which was “too corporate” to being a religious leader guided by spirituality, she explains how the experience has helped her grow as a person and learn new skills that she found important later on in life: “From sitting with the pain of this true criticism, I learned to speak to my sisters of my spiritual life.… I owe this growth to my sisters and to the challenging time of leadership” (Campbell 41). By acknowledging the people whose constructive criticisms allowed for her growth, Sister Simone is humbly admitting her past flaws and how she needed the help of others to overcome them. From this, we can learn that doing good deeds in life is not something that can be done alone and that we need to rely on others from time to time. We can understand those others to help ourselves mentally mature. Sister Simone understands this important connection between people, and she incorporates this into her work in NETWORK. When asked about her appeal to people, she credits her message, not her politics, saying, “‘I see in this a deep hunger for relationship, a hunger for beauty, a hunger for connection,’ she told me. ‘A lot of people feel left out spiritually and somehow we have tapped into this hunger’” (Fox). Campbell does not believe that all the support should go to her, but rather her ideas that people also support, making her more likable and relatable because of her humility. We are then comfortable with viewing her as an icon if we have similar views to hers, uniting us as a group. Sister Simone’s humility teaches us important lessons on companionship and unifies many people in supporting an icon of hope.

What makes Simone Campbell a hero for us are her traits of goodwill, dedication, and humility. In her goodwill, she acts as a role model and gives us motivation by showing that she truly cares for us, all of us, even those of us who feel forgotten at times. Her dedication that she uses to balance activism and her faith exemplifies for us how to be devoted and persevere, and her humility shows us that she is a leader who can unite many of us and show us that we need others in our lives. When I first learned of Sister Simone, I did not want to put in an effort to learn more about her. I usually try to separate religion from other parts of my life, even though I’m Catholic like Sister Simone. My only impression of nuns was from The Sound of Music, which portrays them as strict and very formal, and that was what I was expecting when my dad turned on “Radical Grace.” Much to my surprise, I saw the sisters in their community helping other people, and it made me feel touched. Researching her more, I discovered that Sister Simone has positively changed many people's lives, and she inspired me. But the inspiration was not to become an activist nun--I have my own dreams and aspirations. Rather, I was able to single out her traits and figure out how they would apply to my own life. Maybe I won’t be advocating for the economic equality of people in worse financial situations than me, but I will be kind to others to show that I care for them. Maybe I won’t have religion affect my everyday actions, but I will remember to persevere in all the commitments that I make. I may not give all the credit for my personal growth and achievements to others, but I will admit that I need them to guide me through life. Lessons like these are not limited to Simone Campbell. We can find them everywhere: in our family members, in our schoolmates, in our teachers, and in ourselves. And as we realize our own heroic potential, we must consider how we can change our own lives as well as the lives of others for the better.

Campbell, Simone. A Nun on the Bus: How All of Us Can Create Hope, Change, and Community. HarperOne, 2014.