In lockdown, they found someone – with four legs – to love

Lockdowns have inspired people all around the world to give animals in need a new home. But at a time when we're all looking for companionship, these creatures are giving their new owners a much-needed boost as well.

APRIL 24, 2020 - JOHANNESBURG - Like most of the world, Colette Hoggmascall is reaching the point where her isolation companions can sometimes test her patience. 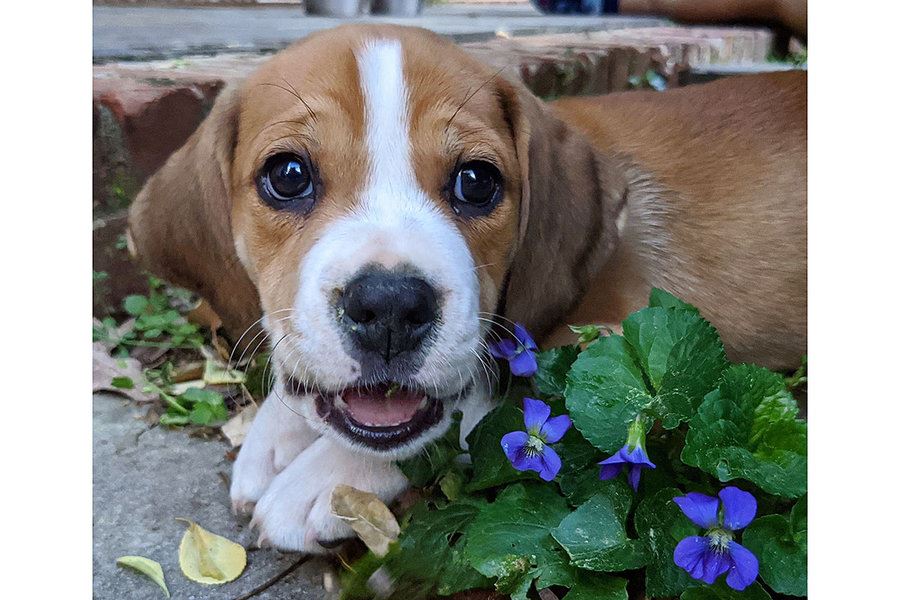 Sarah and Adam Galatioto-Ruff’s newly adopted dog, Figulus Caesar (Figgy), lies in the shade in Georgia on March 28, 2020.Courtesy of the Galatioto-Ruffs

They eat ravenously, don’t clean up after themselves, and when she tries to talk to them, they stare at her blankly from behind their tangled hair, which flops over their eyes like they’re members of a ‘90s boy band.

“They’ve got their own personalities, that’s for sure,” she says of Hamish and Hedgehog, whom she is fostering through a local animal charity.

Across the globe, billions of people are hunkered down at home, waiting out the end of a pandemic that has deeply rattled the human world. And to keep their spirits up, many have turned to the company of the one group who know nothing at all about that crisis: animals.

From Israel to New York City, and from Cape Town to the United Kingdom, animal shelters have reported a massive upsurge in adoption and foster requests during the COVID-19 pandemic. In the United States, for instance, there was a 97% increase in fosters in the second week of March 2020 compared with the same week last year, according to PetPoint, a software program that tracks shelter adoptions in the U.S. Shelters have even posted about emptying out – though some fear there will be a surge of returns once lockdowns lift.

But for many new pet owners, it was an easy choice in a time of many difficult ones.

“We made the decision overnight,” says Sarah Galatioto-Ruff, a teacher in Atlanta who recently adopted a puppy named Figgy with her husband, Adam.

For months, the couple had been nursing the pain of losing their old dog, Napoleon. A new dog was on the horizon, but not until they were ready.

And then last month, the world around them began to shrink. One day, Ms. Galatioto-Ruff was standing in front of a classroom full of high school students, teaching them Latin cases and the basics of algebra. The next, she was squinting at their pixelated faces on her computer screen. Restaurants closed. Friends stopped coming over. The boundaries of the couple’s life became the perimeter of their suburban neighborhood, where they took long evening walks to break the monotony of days at home.

“We couldn’t imagine bringing a new dog ... into our hearts right now,” she says. “And then this whole thing started and we realized, we’re going to be home for weeks on end, possibly months on end, and there’s really no better time.”

One evening in mid-March, she logged onto PetFinder, a database that connects shelter animals to possible owners. She clicked on a photo of a floppy-eared puppy in a blue navy captain’s hat. And that was that. “I took one look and said yup, this is him,” she says.

In Lancaster, England, journalist Ruth Hopkins was also looking for a distraction after a difficult several months. First, late last year, she was diagnosed with skin cancer. And as she dealt with that, she was also scrambling to meet a deadline for her book manuscript. And now, a global plague kept her mostly locked indoors, or out running errands for her elderly parents.

She began to think of the two cherished mutts she’d lost in her divorce a couple years earlier, and their comforting, earnest cluelessness.

“I’ve always found it very stress relieving to have a dog because generally they don’t understand what we humans are getting so upset about,” she says. “They are just happy to see you.”

It didn’t take long to convince her parents, and a few days later she collected Layla, a sand-colored, samosa-eared hound, from a local rescue.

Immediately, the days felt lighter. Layla sniffed around Ms. Hopkins and her father as they did their morning planks. She squeezed between her and her mother on walks around the neighborhood, as if worried about missing out on the conversation. And then she settled in for long contented naps on the couch as Ms. Hopkins read or worked beside her.

“Just to cuddle like that, it’s extremely therapeutic,” she says. “It puts your mind and your body at ease.”

Someone ‘to give you a hug’

For many new pet owners, their animals also give structure to days at home that seem to ramble out endlessly into the horizon.

“It’s really nice to have somebody to wake you up or just to give you a hug,” says Rethabile Krämer who adopted two puppies, Ragnar and Gary, from a rescue organization in Johannesburg, South Africa, with her husband in late March. The next day, the country started a strict 21-day lockdown.

“Right now if it was just my husband and I, I think we would be almost killing each other,” she says, laughing. “The puppies lighten the mood, and keep us quite busy.”

And for those who live alone, animals bring company to the quiet moments between work video calls and virtual happy hours.

“It’s a good break. I stop my work, I get up, and I get on the floor and just hang out with them,” says software developer Ahmed Elgoni, who recently adopted two cats in Amsterdam. “They start purring like tiny motors. ... It creates a very nice pause in my day.”

In Mexico City, Pilar Marroquín’s new rescue dog Kenia has made the days less lonely too. The pair still go to dog parks in the city – as long as they aren’t too busy – and do yoga together in the living room. Sometimes, she opens the door to her apartment and lets Kenia bound up and down the hallways with the neighbor dogs as their humans stand back, keeping their distance.

The coming economic shutdown could worsen crime, she worries. But Kenia, despite being more teddy bear than grizzly, is big enough to give off dangerous vibes.

“Back in the day I would be walking on the street and I would see a group of guys, I would be the one moving to the other side, and now it’s the exact opposite,” she says. “They’ll see me with the dog and they’ll walk in the other direction.”

For Ms. Hoggmascall, who is fostering the two Shetland ponies in Sussex, her scruffy, 3-foot-tall companions don’t provide much in the way of added security. “They spend 18 hours a day eating,” she says. But they give her someone to be present for, a way to stop her mind from sailing off into the future that might have been.

A month ago, she and her husband were frantically preparing for a move to Brunei, a tiny sultanate on the island of Borneo. They had stacked worldly possessions in a shipping container and sent it across the ocean.

Then came COVID-19. Ms. Hoggmascall has come to terms with the fact that it will probably be a long time before she leaves her small patch of farmland in the south of England.

And until she does, Hamish and Hedgehog will be here too, eating and sleeping and carrying on as though nothing is wrong in the world.

As a public service, all our coronavirus coverage is free. No paywall.