SpaceX rocket ship blasts off into orbit with 2 Americans

MAY 30, 2020 - CAPE CANAVERAL, Fla. (AP) — A rocket ship built by Elon Musk's SpaceX company thundered away from Earth with two Americans on Saturday, ushering in a new era in commercial space travel and putting the United States back in the business of launching astronauts into orbit from U.S. soil for the first time in nearly a decade. 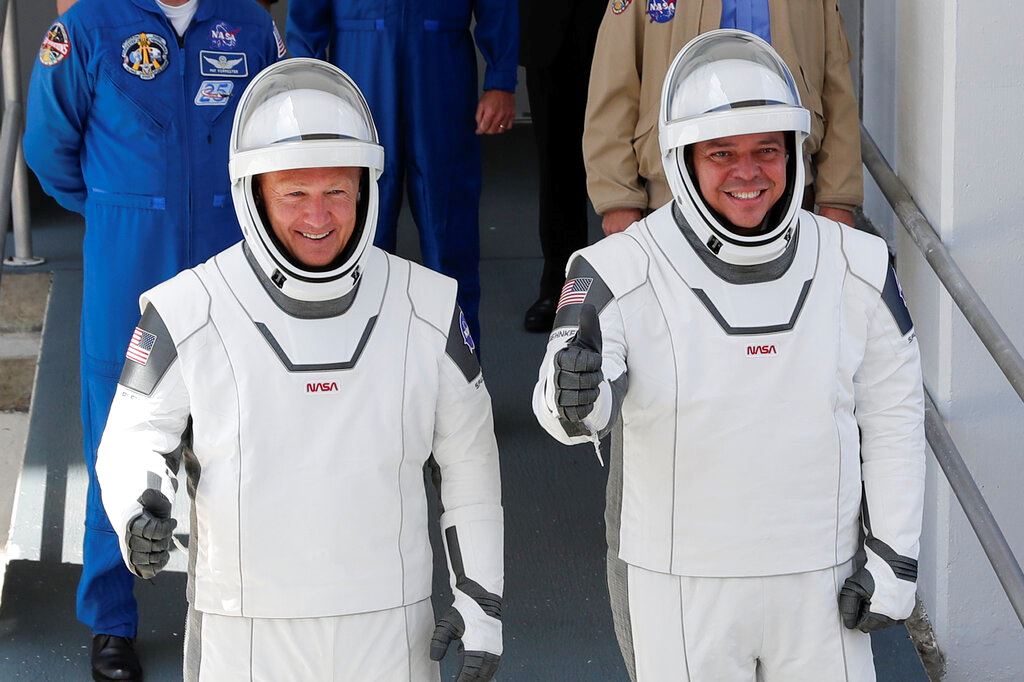 NASA astronauts Douglas Hurley, left, and Robert Behnken walk out of the Neil A. Armstrong Operations and Checkout Building on their way to Pad 39-A, at the Kennedy Space Center in Cape Canaveral, Fla., Saturday, May 30, 2020. The two astronauts will fly on a SpaceX test flight to the International Space Station. For the first time in nearly a decade, astronauts will blast into orbit aboard an American rocket from American soil, a first for a private company.AP Photo/John Raoux

NASA's Doug Hurley and Bob Behnken rode skyward aboard a white-and-black, bullet-shaped Dragon capsule on top of a Falcon 9 rocket, lifting off at 3:22 p.m. from the same launch pad used to send Apollo crews to the moon a half-century ago. Minutes later, they slipped safely into orbit.

"Let's light this candle," Hurley said just before ignition, borrowing the words used by Alan Shepard on America's first human spaceflight, in 1961.
The two men are scheduled to arrive at the International Space Station, 250 miles above Earth, on Sunday for a stay of up to four months, after which they will come home with a Right Stuff-style splashdown at sea.

The mission unfolded amid the gloom of the coronavirus outbreak, which has killed over 100,000 Americans, and racial unrest across the U.S. over the death of George Floyd, a handcuffed black man, at the hands of Minneapolis police. NASA officials and others held out hope the flight would would be a morale-booster.

"Maybe there's an opportunity here for America to maybe pause and look up and see a bright, shining moment of hope at what the future looks like, that the United States of America can do extraordinary things even in difficult times," NASA Administrator Jim Bridenstine said before launch.

With the on-time liftoff by the 260-foot rocket, SpaceX, founded by Musk, the Tesla electric-car visionary, became the first private company to launch people into orbit, a feat achieved previously by only three governments: the U.S., Russia and China. 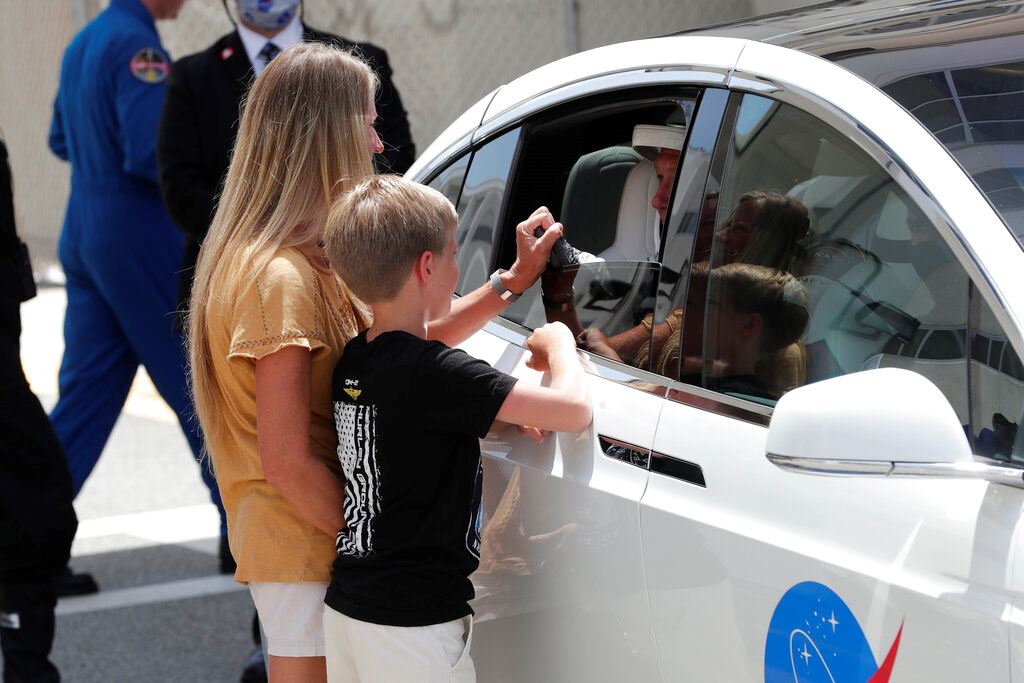 NASA astronauts Douglas Hurley, holds the hand of his wife Karen Nyberg as their son Jack, 10 looks on, after Hurley and astronaut Robert Behnken walked out of the Neil A. Armstrong Operations and Checkout Building on their way to Pad 39-A, at the Kennedy Space Center in Cape Canaveral, Fla., Saturday, May 30, 2020. AP Photo/John Raoux

The flight also ended a nine-year launch drought for NASA, the longest such hiatus in its history. Ever since it retired the space shuttle in 2011, NASA has relied on Russian spaceships launched from Kazakhstan to take U.S. astronauts to and from the space station.

In the intervening years, NASA outsourced the job of designing and building its next generation of spaceships to SpaceX and Boeing, awarding them $7 billion in contracts in a public-private partnership aimed at driving down costs and spurring innovation. Boeing's spaceship, the Starliner capsule, is not expected to fly astronauts until early 2021.

Musk said earlier in the week that the project is aimed at "reigniting the dream of space and getting people fired up about the future."
Ultimately, NASA hopes to rely in part on its commercial partners as it works to send astronauts back to the moon in the next few years, and on to Mars in the 2030s.

A launch attempt on Wednesday was called off with less than 17 minutes to go in the countdown because of lightning. On Saturday, stormy weather in Florida threatened another postponement for most of the day, but then the skies began to clear in the afternoon just in time.

Before setting out for the launch pad in a gull-wing Tesla SUV — another Musk product — Behnken pantomimed a hug of his 6-year-old son, Theo, and said: "Are you going to listen to Mommy and make her life easy?" Hurley blew kisses to his 10-year-old son and wife. 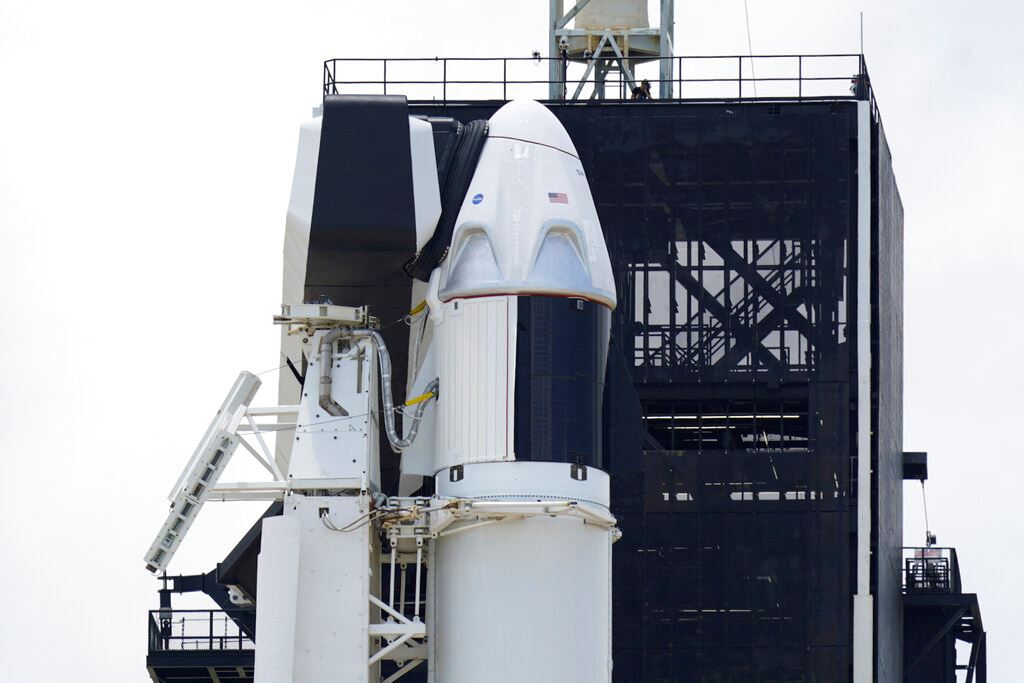 The SpaceX Falcon 9, with Dragon crew capsule on top of the rocket, sits on Launch Pad 39-A, Friday, May 29, 2020, at the Kennedy Space Center in Cape Canaveral, Fla. AP Photo/David J. Phillip

Nine minutes after liftoff, the rocket's first-stage booster landed, as designed, on a barge a few hundred miles off the Florida coast, to be reused on another flight.

"Thanks for the great ride to space," Hurley told SpaceX ground control. His crewmate batted around a sparkly purplish toy, demonstrating that they had reached zero gravity.

"It's been nine years since we've launched American astronauts on American rockets from American soil — and now it's done. We have done it. It's been way too long," he said.

President Donald Trump and Vice President Mike Pence flew in for the launch attempt for the second time in four days. 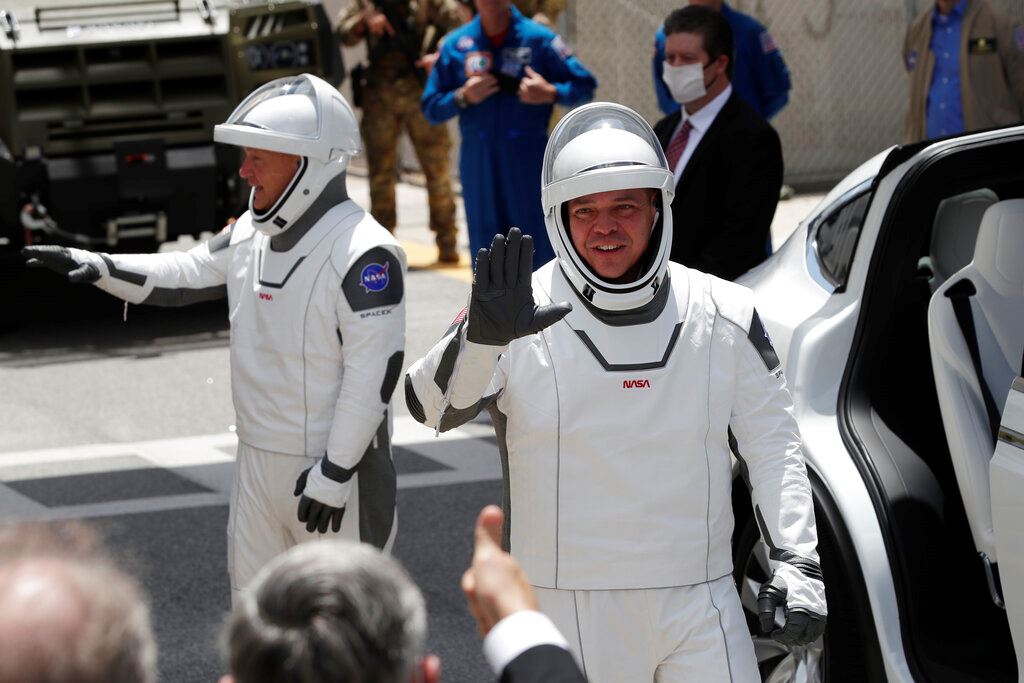 NASA astronauts Douglas Hurley, left, and Robert Behnken wave as they exit the Neil A. Armstrong Operations and Checkout Building on their way to Pad 39-A, at the Kennedy Space Center in Cape Canaveral, Fla., Saturday, May 30, 2020.AP Photo/John Raoux

"I'm so proud of the people at NASA, all the people that worked together, public and private. When you see a sight like that it's incredible," Trump said after liftoff.

Inside Kennedy Space Center, attendance was strictly limited because of the coronavirus, and the small crowd of a few thousand was a shadow of what it would have been without the threat of COVID-19. By NASA's count, over 3 million viewers tuned in online.

Despite NASA's insistence that the public stay safe by staying home, spectators gathered along beaches and roads hours in advance.

Among them was Neil Wight, a machinist from Buffalo, New York, who staked out a view of the launch pad from a park in Titusville.

"It's pretty historically significant in my book, and a lot of other people's books. With everything that's going on in this country right now, it's important that we do things extraordinary in life," Wight said. "We've been bombarded with doom and gloom for the last six, eight weeks, whatever it is, and this is awesome. It brings a lot of people together." 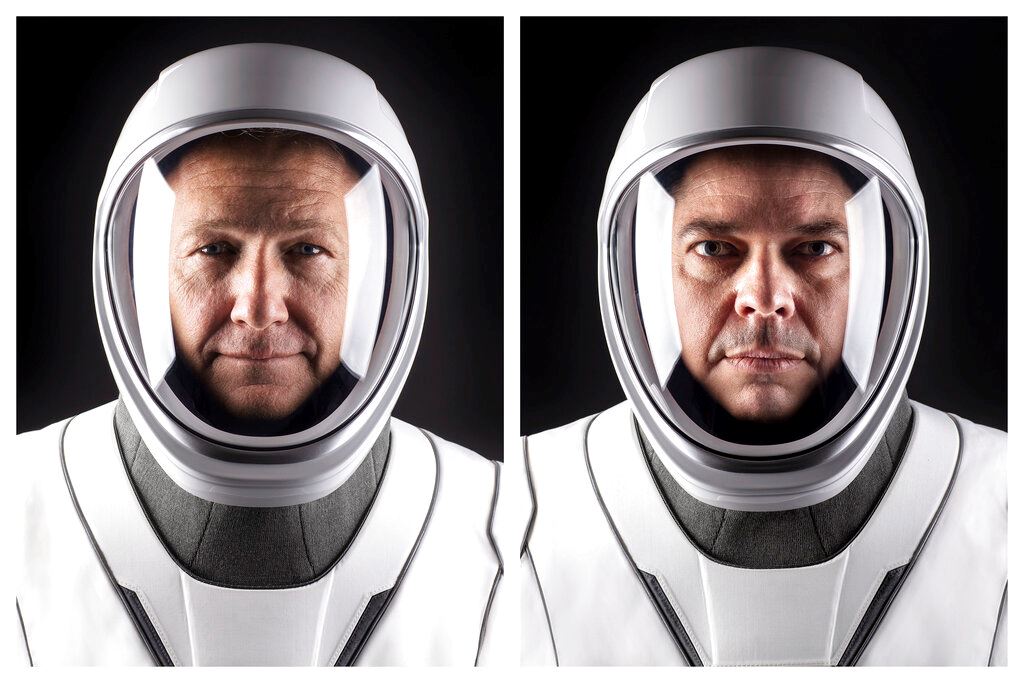 This combination of undated photos made available by SpaceX shows NASA astronauts Doug Hurley, left, and Bob Behnken in their spacesuits at SpaceX headquarters in Hawthorne, Calif. On Wednesday, May 27, 2020, They are scheduled to board a SpaceX Dragon capsule atop a SpaceX Falcon 9 rocket and, equipment and weather permitting, shoot into space. It will be the first astronaut launch from NASA’s Kennedy Space Center since the last shuttle flight in 2011.SpaceX via AP

Because of the coronavirus, the astronauts were kept in quasi-quarantine for more than two months before liftoff. The SpaceX technicians who helped them get into their spacesuits wore masks and gloves that made them look like black-clad ninjas. And at the launch center, the SpaceX controllers wore masks and were seated far apart.

Hurley, a 53-year-old retired Marine, and Behnken, 49, an Air Force colonel, are veterans of two space shuttle flights each. Hurley piloted the shuttle on the last launch of astronauts from Kennedy, on July 8, 2011.

In keeping with Musk's penchant for futuristic flash, the astronauts wore angular white uniforms with black trim. Instead of the usual multitude of dials, knobs and switches, the Dragon capsule has three large touchscreens.

SpaceX has been launching cargo capsules to the space station since 2012. In preparation for Saturday's flight, SpaceX sent up a Dragon capsule with only a test dummy aboard last year, and it docked smoothly at the orbiting outpost on autopilot, then returned to Earth in a splashdown.

During the Mercury, Gemini, Apollo and shuttle programs, NASA relied on aerospace contractors to build spacecraft according to the agency's designs. NASA owned and operated the ships. 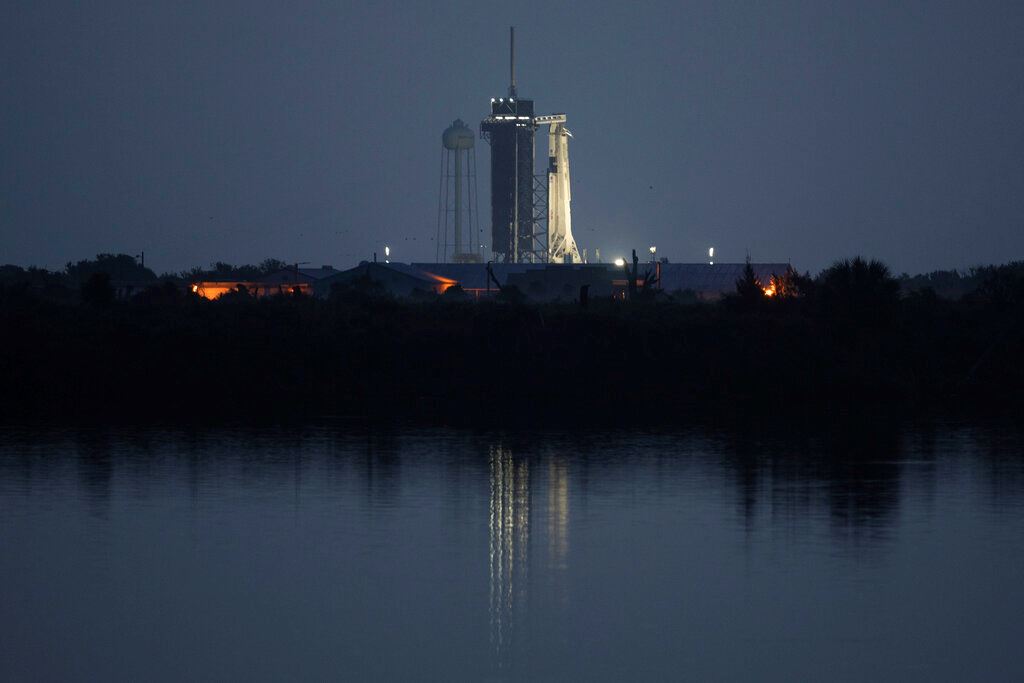 In this image provided by NASA, a SpaceX Falcon 9 rocket, with the company's Dragon crew capsule onboard, is illuminated on the launch pad at Launch Complex 39A as preparations continue for NASA's SpaceX Demo-2 mission, Saturday, May 30, 2020, at the Kennedy Space Center in Cape Canaveral, Fla. Despite more storms in the forecast, SpaceX pressed ahead Saturday in its historic attempt to launch astronauts for NASA, a first by a private company.Joel Kowsky/NASA via AP

Under the new, 21st-century partnership, aerospace companies design, build, own and operate the spaceships, and NASA is essentially a paying customer on a list that could eventually include non-government researchers, artists and tourists. (Tom Cruise has already expressed interest.)

"What Elon Musk has done for the American space program is he has brought vision and inspiration that we hadn't had" since the shuttle's retirement, Bridenstine said.

The mission is technically considered by SpaceX and NASA to be a test flight. The next SpaceX voyage to the space station, set for the end of August, will have a full, four-person crew: three Americans and one Japanese.

Saturday's first human flight was originally targeted for around 2015. But the project encountered bureaucratic delays and technical setbacks.
A SpaceX capsule exploded on the test stand last year. Boeing's first Starliner capsule ended up in the wrong orbit during an crew-less test flight in December and was nearly destroyed at the mission's end.

The Associated Press Health and Science Department receives support from the Howard Hughes Medical Institute's Department of Science Education. The AP is solely responsible for all content.