Free Comic Book Day is May 1. For more info go to: https://www.freecomicbookday.com/

by Zachary Joseph from San Diego, California in United States

Walking down Times Square, a young man pauses and gazes at a marquee titled “Spider-Man receives key to the city” scrolling above. An old man pauses beside him, directing his attention to the display. With a grin, the old man exclaims, “You know, I guess one person can make a difference. Nuff said!” One person did make a difference, a certain Jewish boy from the streets of Manhattan left his mark in history and the hearts of millions. Lee was born on December 28, 1922. He was known for creating many beloved Marvel superheroes, notably the Fantastic Four, Spiderman, Iron man, etc. Lee graduated high school at 16 in 1939. Getting hired for Timely Comics and quickly rising through the ranks, his company eventually became Marvel Comics. After the release of DC’s Justice League in March 1960, Lee was given a lot more freedom to make what he wanted, which led to him creating the Fantastic Four and many other beloved heroes. During World War 2, Stan Lee enlisted in the army for three years, leaving as a sergeant; afterwards, Lee came back to find that the comic industry was reusing the same ideas, themes, and character types. He was getting fed up with the blandness of the industry and contemplated leaving, before his wife Joan came and told him that if he did not like what he was doing, then he should write what he wanted to write. This spiraled into the intriguing and humanoid heroes that Lee made afterward. Stan Lee is no hero; he is a hero among heroes, serving as an inspiration for millions. He is best known for his title as the father of Modern Comics and the general superhero archetype. His desire to succeed and his innovate ideas came during a time where industries were filled with dull ideas and only wanted money. Stan’s will to persevere despite the immeasurable odds of failure proves him worthy of his title. 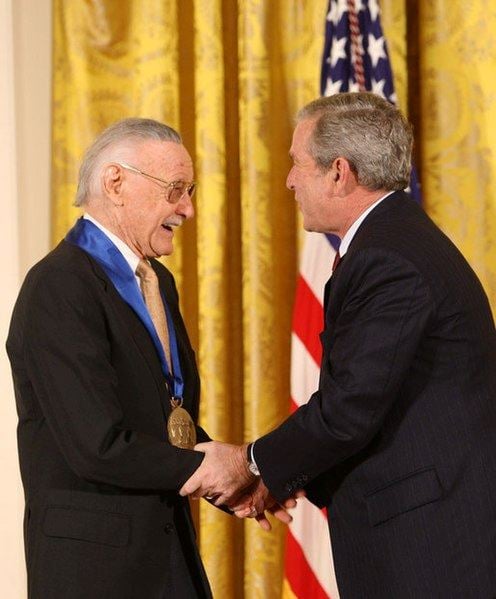 https://commons.wikimedia.orgWhite House photo by Chris Greenberg [Public domain]Lee had the determination to succeed, always searching for a new obstacle to overcome, wanting to do more. As a child, Stanley Martin Lieber grew up in a small house in Manhattan during the Great Depression. During this time, goals and aspirations to get anywhere in the world faded, as it seemed hopeless to obtain more money. However, Lee was different; his chains of status did not hold him back from trying to succeed despite all effort being seemingly futile. Lee was distinctly skilled in his ability to not only articulate his writing but also worked hard to get where he is. His ascent to the top of Timely, later known as Marvel Studios, and demonstration for his natural gift was described like this. “He won a New York Herald Tribune high school writing contest for three weeks in a row...When editors at Timely became aware of Lee’s linguistic abilities, he was promoted to proofreader and then given the chance to make writing contributions to the firm’s hit new superhero comic, Captain America... Lee’s rise to the top of the company’s creative hierarchy was completed just a year later, when Simon and Kirby departed” (“Stan Lee.” Encyclopedia of World Biography Online). Because Stan Lee worked hard instead of just accepting his situation and living in abject poverty. He rose quickly to the top of Marvel after previous writers left to form DC comics. He also had the talent to back up his work, being vastly proficient in semantic capabilities. He played to his strengths and had high hopes for his future.  However, Lee did not just stop, he kept setting new goals and new milestones to achieve, after completing one, he set another in his path, with accomplishments such as “Lee started intellectual-property company POW! Entertainment in 2001 and the following year published his autobiography, Excelsior! The Amazing Life of Stan Lee. Later in the decade he received a Medal of Arts honor from President George W. Bush and launched the History Channel show, Stan Lee’s Superhumans, a series that looked at people with remarkable skills and abilities ”(“Stan Lee.” Biography.com). Stan Lee was exceedingly ambitious and despite his early years living in poverty, he had goals and passion. Even after he made it big in comics, Lee wanted more. He continued to try new projects and worked diligently at doing what he loved. His skill being honored by George W. Bush was a fantastic accomplishment, but Stan Lee kept going pursuing new goals and enterprises. Stan Lee worked assiduously and smart, and after getting hired to timely, he quickly rose to the top. He knew his goals and worked to succeed in those aspects. Lee’s aspiration to flourish despite impossible odds is a skill many should attribute.

Lee made a revolution in comics, making massive changes to the industry and its future when the same concepts had been continually overused. After coming back from war, Lee had to become accustomed to the fact that comics became unpopular. Every archetype and story had been repeatedly done to death, and the avid readers were sick of it.  Stan Lee, with support from his wife Joan, tried a new kind of hero. A hero whose flaws were apparent but tried their best to do the right thing. It was a success; Lee took a significant risk when attempting this cause as it had never been done before; nevertheless, he did it, and ushered in a new wave of comics that showed diverse characters and complicated personalities. Stan had a fascinating personality and writing style, which drew in many of his readers who adored- the new hero archetype. Stan is described to have been “...particularly known for his dynamism with copy and for imbuing his characters with a sense of humanity, tackling real-world issues like bigotry and drug use, which would influence comics for decades. An outgoing, humorous showman, he also developed a number of slogans as part of his shtick, including a Latin-derived call to rise, “Excelsior!” ”(“Stan Lee.” Biography.com). Lee had a particular style in making his characters, they were not perfect heroes without flaws, his heroes were human. This was a completely different idea from the classic heroes of the time, such as Batman, and Superman. Despite this concept being utterly unheard of, Lee tried it even though he could have failed. He was an ingenious person, thinking outside conventions and doing what has not been done before. Lee’s characters were indeed one of a kind at the time, a fresh take on the concept of heroism; His ideas are expressed as described as “a flawed humanity, a change from the ideal archetypes that were typically written for pre-teens. His heroes could display bad tempers, melancholy fits, vanity, greed, etc… Before Lee, superheroes were ideal figures” (“Stan Lee.” Encyclopedia of World Biography Online). After Lee’s massive impact in the comics, his fans could relate to the characters he made because they became more human. Heroes like Iron Man, Hulk, Spiderman were realistic because their flaws felt real, not a kryptonite. Iron Man dealt with alcoholism, Spiderman with responsibility, Hulk with anger management. They changed the definition of a hero to any individual who does the right thing despite personal flaws; they do not have to be an altruist. Not all heroes wear capes, Lee’s stories prove that; he was the progenitor of the overall concept of modern heroism, which recognizes anyone who works for the greater good despite their flaws. He alone made that theme possible by taking a leap of faith out of his comfort zone.

Throughout Lee’s life, for every accomplishment, there was a setback, but that did not matter he persevered through bankruptcy, abuse, and the loss of the love of his life Joan. Lee felt so much pain throughout his life and was still able to keep his influential charisma and showman attitude. Marvel studios had several issues during its time as an independent corporation, but Lee stuck with them through it, dealing with problems like when “... Lee and the rest of the company’s leadership were rocked by terrible financial problems...The owners then directed Lee and other Marvel executives to expand the size and prices of its product line. But these decisions angered comic book fans, who felt that the company’s decision to flood the market with pricey titles smacked of greediness. Thousands of fans subsequently abandoned Marvel for the offerings of other comic book publishers. Finally, a fierce struggle for ownership of Marvel and its many superhero characters erupted in 1996. This battle lasted for three years and pushed the company into bankruptcy and a total reorganization” (“Stan Lee.” Stan Lee Biography Today). Lee was an executive during the mid-1990s and had to deal with many lawsuits and angry fans. As a business venture they had at the time bombed dramatically, financial issues subsequently arose. By counterbalancing by raising the prices, this infuriated fans and the company was abandoned. By many even after the company was enduring major Lawsuits, he stilled remained with his company not jumping ship after going bankrupt. In his personal life, Stan also had severe hardships in the last few years of his described as “In July of 2017, his wife Joan--whom he had been with for 69 years--passed away. Joan’s death greatly impacted Lee, and he would later go through more than just grief. In early 2018, news outlets reported Lee was the subject of an elder-abuse investigation” (“Stan Lee.” Encyclopedia of World Biography Online). Despite his significant successes in his previous years, his final years were much more difficult. In 2017 with his wife’s passing, he was immensely changed by it causing him to be much less jovial than his usual showman personality; it was also released that he was being abuse 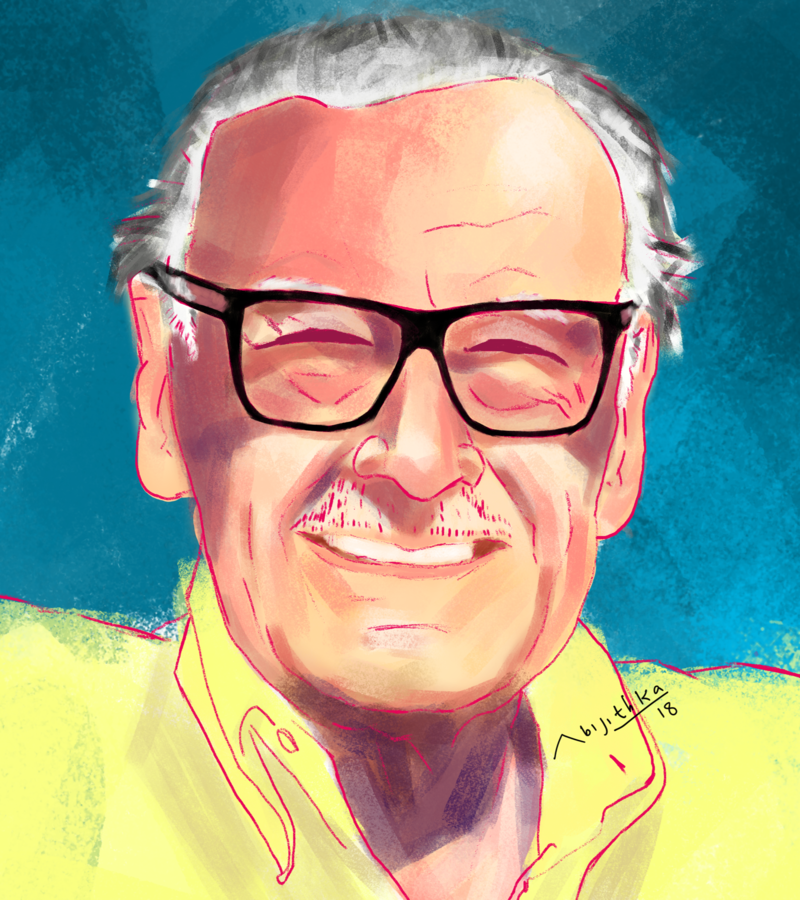 https://commons.wikimedia.orgAbijithka [CC BY-SA 4.0 (https://creativecommons.org/licenses/by-sa/4.0)]d for several years. With all this weight pulling down on him, he still managed to keep going until he passed on due to cancer. He kept going through pain and rough patches, sticking it out until he made it through, his life was not easy, and yet Lee persevered.

Stan Lee was a hard working man, who brought change and new ideas, in spite of the obstacles in his path to success. His life events like the death of his wife and his wave of comics proved these as facts. He is worthy of his appellations. He has inspired many including me, with his infectious enthusiasm to his perseverance through rough patches throughout his life and his drive to succeed. His ideology that heroes do not have to be perfect has inspired me and his fans to strive to be our best despite our flaws. Not everyone can be Superman; however, anyone can be a hero. Stan Lee worked hard and made significant impacts on the world he left behind, from his inventive ideas about heroism to his hard work and determinations to further his goals and ideas. He touched the hearts of many of his fans with his works, even after he effectively retired, Lee was still involved with his creations and worked to make sure they were correctly portrayed, He will never be forgotten. Lee is proof that one person can make a difference, and will live on in the hearts of millions.