by Michael Ji from San Diego, California in United States

A hero is “a person who, in the opinion of others, has special achievements, abilities, or personal qualities and is regarded as a role model or ideal” (Dictionary.com) Heroes can guide others in how to succeed in life or simply just make someone else's day better. They can teach us how to be better people in society by setting an example or standard for others to reach and achieve. Some heroes show this through their actions in making the world a better place. They might contribute to society through charities, their own achievements, or just small acts of kindness that other people can view and learn from. Many heroes are famous role models whom anyone can recognize and admire for their work and achievements in the world. Heroes are people whom society can look up to as an example or role model to inspire ourselves and help others. 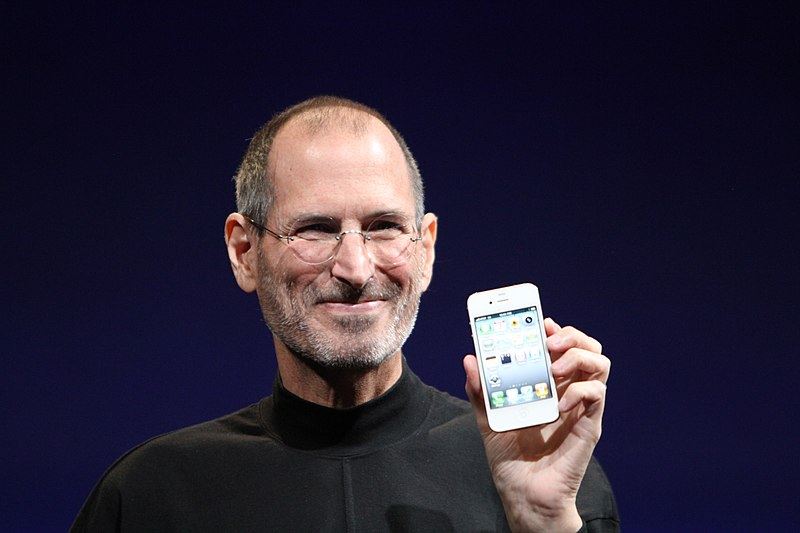 Steve Jobs presenting the first iPhonehttps://commons.wikimedia.org/wiki/File:Steve_Jobs_Headshot_2010.JPGSteve Jobs was one of the world’s most innovative man, creating new technology and products that would change and revolutionize the world. However, Steve Jobs was not always at the top; his life started at humble beginnings. In his early life, he was not always the greatest student, and he had not found a way to use his intelligence properly. He was still able to make it into college, which he promised his parents he would. Still not able to find a goal to pursue, Steve Jobs dropped out of college waiting for an opportunity. Eventually, his chance came when he thought of the idea to build a technology-based company. He would chase after his goals, set to inspire others and developed pieces of technology that would affect our everyday lives. With his many accomplishments and contributions to the technological world, Steve Jobs can be recognized as a hero in our society. Steve Jobs demonstrated determination, intelligence, and leadership throughout his path to success, defining him a hero and role model as he proved to never give up in pursuing one's dreams. 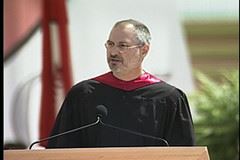 Steve Jobs giving his speech at Stanford Universityhttps://www.flickr.com/photos/kengz/70892997Steve Jobs always had determination throughout his life, which led to his success and fortune. However, he had to work incredibly hard to achieve the level of success he had gained. Growing up, Steve Jobs did not have a clear direction of where his life was headed. He was a smart student, but he could never find the right way to apply his knowledge. So, he dropped out of college. Steve Jobs eventually had an idea that would change his life. He decided to create a technology company that would build and sell computers and computer programming. This idea turned from imaginary to reality, as it led Steve Jobs to reach higher ranks in the technological world. With his college friend Steve Wozniak, they created what is now the world-renowned company Apple. Eventually, it became a monopoly in the technology market. According to biography.com, “Jobs was smart but directionless, dropping out of college and experimenting with different pursuits before co-founding Apple with Steve Wozniak in 1976.” Steve Jobs never gave up on chasing his dreams, as he ultimately achieved his goal. He showed determination as he started at the bottom as a college dropout but eventually turned his life around to become one of the world’s most successful entrepreneurs. Another instance where Steve Jobs demonstrated determination and perseverance was his first battle with cancer. In his TED Talk at Stanford in 2005, Steve Jobs discussed his fight with pancreatic cancer. He told the story of how his doctor said he wouldn’t live more than a couple of months, but he fought for his life and came out on top. Steve Jobs fought hard in his battle of pancreatic cancer. Eventually, his efforts paid off as he defeated cancer. Steve Jobs shows others how determination and never giving up pays off. The story shows how choosing to never back down led him to success and to leaving an impact on the world. His perseverance is further proof of how he is a hero to many who want to pursue and achieve their dreams and goals. 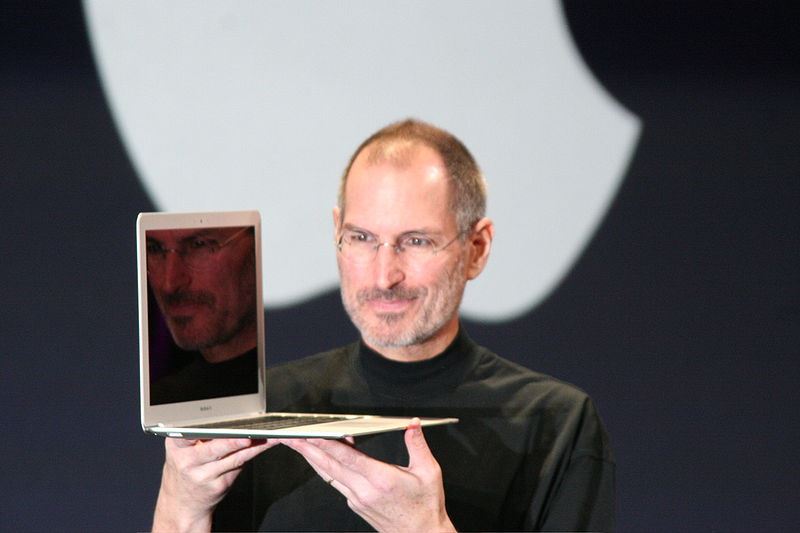 Steve Jobs shows off the first-ever iMachttps://commons.wikimedia.org/wiki/File:Steve_Jobs_with_MacBook_Air.jpgSteve Jobs' intelligence also further defines him as a hero in the technological world. Steve Jobs was able to change and revolutionize the world with his inventions of new technology. He developed household products that would be used and function in our everyday lives. The invention of the first Apple computer became an instantaneous success. “The computer was advanced for its time and had features such as a central processing unit, color graphics, a disk drive, and a keyboard. It was a huge success and generated millions of dollars for the company” ("Steve Jobs" Newsmakers). Steve was able to implement new pieces of technology into his products, which later became the standard for other companies. Without Steve Jobs’ contribution to the technological world, the world may not be how it is today. With his incredible intelligence, Steve Jobs was able to influence the world with his innovative technology and products. He also developed many other products which changed our view of technology. In 2007 at MacWorld, Steve Jobs introduced an item that would change our daily lives. “Today we’re introducing three revolutionary new products. The first is a widescreen iPod with hand controls. The second is a revolutionary mobile phone. And the third is a breakthrough Internet communications device. … These are not three separate devices. This is one device. We are calling it iPhone” (Gillam). Steve Jobs and his company were able to develop something new and innovative that the world has never seen before. Thus, his intelligence is further exemplified, as he revolutionized the world without any baseline to draw inspiration from. Steve Jobs’ ingenuity and intelligence aided in his success and impact on the world. His technology and products have changed our lives and the way we now view technology today. 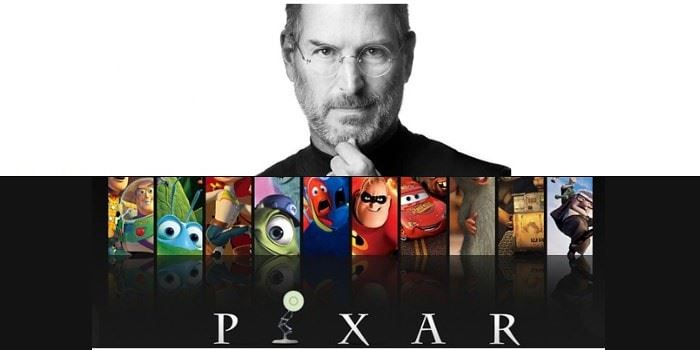 Steve Jobs also led the company Pixar, as well as Applehttps://www.flickr.com/photos/iphonedigital/31501330636Not only did Steve Jobs demonstrate determination and intelligence, but he was also outstanding in leadership. Throughout his career, he was able to motivate his team and company to create some of the most revolutionary products and build his legacy. He was able to achieve and accomplish a lot in his career because of how he led his company. “He had a well-deserved reputation as one of the most demanding and intimidating bosses in the United States, if not the world” ("Steve Jobs" Gale Student Resources in Context). Steve Jobs was known for his hard-working attitude, which enabled him to motivate his company to reach for high goals of innovation that the world had never done before. Steve Jobs proves to others that anything can be achieved with a mindset on accomplishing a goal. Steve Jobs demonstrates his leadership under multiple circumstances and different situations. Even though he was kicked out of his own company, he was able to lead other companies to success. “Believing in Pixar's potential, Jobs initially invested $50 million of his own money in the company. The studio went on to produce wildly popular movies such as Toy Story, Finding Nemo, and The Incredibles; Pixar's films have collectively netted $4 billion” (“Steve Jobs” Biography.com). Steve Jobs was able to bring Pixar and NeXT to success; both companies becoming very successful. His leadership skills and strategies were able to create two companies from the group up. He shows anything can be achieved with the correct mentality. Having the mindset of being able to achieve anything, Steve Jobs was able to pass his mentality to his company through his leadership. Having this level of leadership allows others to pursue and inspire to conduct a team and make a difference in the world. Eventually, Apple brought NeXT for its innovative technology and Steve Jobs reunited with his company and made it even more successful. He was able to create the iPhone, iPod, and iPad during his time as CEO of Apple because of his abilities to lead and motive a team to achieve a goal. Even though Steve Jobs started at humble beginnings, he set a goal and worked hard to achieve it. He would not let anyone or anything get in his way, so he was built into a tough leader. Steve Jobs was able to motivate his team and company to produce some of the most revolutionary products in the technology world.

Steve Jobs embodies a hero, as he demonstrates determination, intelligence, and leadership. His determination allowed him to achieve his level of success by never giving up. His intelligence changed the world as he developed new and innovative technology and products. Lastly, his leadership allowed him and his company to rise to the top and always producing the highest quality technology in the world. Steve Jobs is a character many can look up to. As he followed his path and journey to success, you can find inspiration. He started with almost nothing and a dream; he never stops working and eventually achieved his goals and became very successful. Everyone can look at his story and learn and improve their own life. He proves to others that no matter the circumstances, if you work hard to pursue your dreams, they will eventually be achieved. People are inspired that you can be successful and leave a mark on the world even if you start with nothing but a passion. The life of Steve Jobs began in San Francisco on February 24, 1955, and unfortunately, ended on October 5, 2011, due to pancreatic cancer. Throughout his lifetime, Steve Jobs achieved many things to change the technological world. Henceforth, he is perceived by many as a role model. Many people can be inspired by Steve Jobs' success story.

Jobs, Steve. “How to Live before You Die.” TED, www.ted.com/talks/steve_jobs_how_to_live_before_you_die.