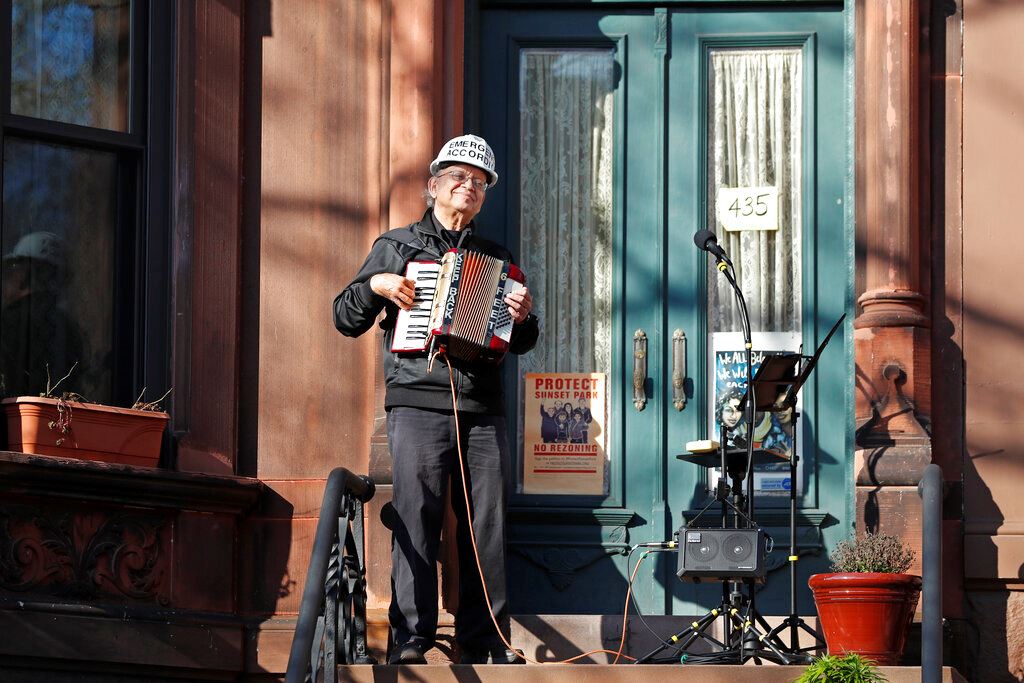 In this Wednesday, April 15, 2020 photo, musician Paul Stein, who has played the accordion since he was eight, entertains neighbors with an "Emergency Accordion Stoop Extravaganza" (EASE) concert from the top step of his stoop in the Sunset Park neighborhood of Brooklyn in New York. "Music…lifts people's spirits and brings them together," Stein says. "We need to keep our spirits up. We need hope now. That's what we need to get through this difficult period."AP Photo/Kathy Willens

Then, on television, the retired public-sector lawyer and political activist saw people around the world rallying: "I saw people in France and Italy banging pots and pans out their windows, clapping and singing from balconies. I wanted to do this in my neighborhood. "

He knew what he had to do.

He took out his accordion. And he played. 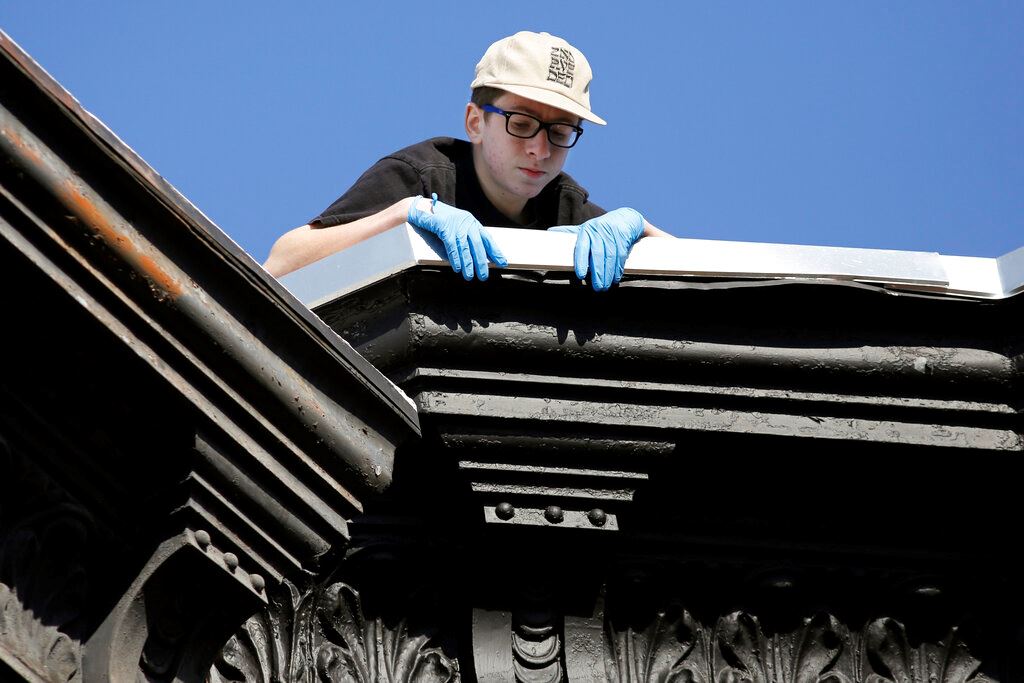 In this Wednesday, April 15, 2020 photo, neighbor Ben Langsam, 16, looks down from the roof of his family's home in Brooklyn's Sunset Park neighborhood while listening to one of Paul Stein's accordion stoop concerts during the coronavirus outbreak in New York.AP Photo/Kathy Willens

His stage is the steps leading up to his building, his stoop. "For as long as people have been hanging out on their stoops and socializing with their neighbors, they've been doing it from their stoops," he said. "The natural acoustics of the narrow street bring the music to my neighbors."

He regularly sings and plays during the nightly 7 p.m. rounds of applause for health care and front-line workers. Over the past few weeks, he has played four, 45-minute concerts.

Stein had played on his block before: scary music for the children on Halloween while his partner Elena handed out candy. This time, he alerted the neighbors with a telephone call. At 71, he's in a high-risk group. So, he didn't want to encourage a get-together at close distance.

"I'm very conscientious, he said. "I don't want to do anything to promote social gathering." 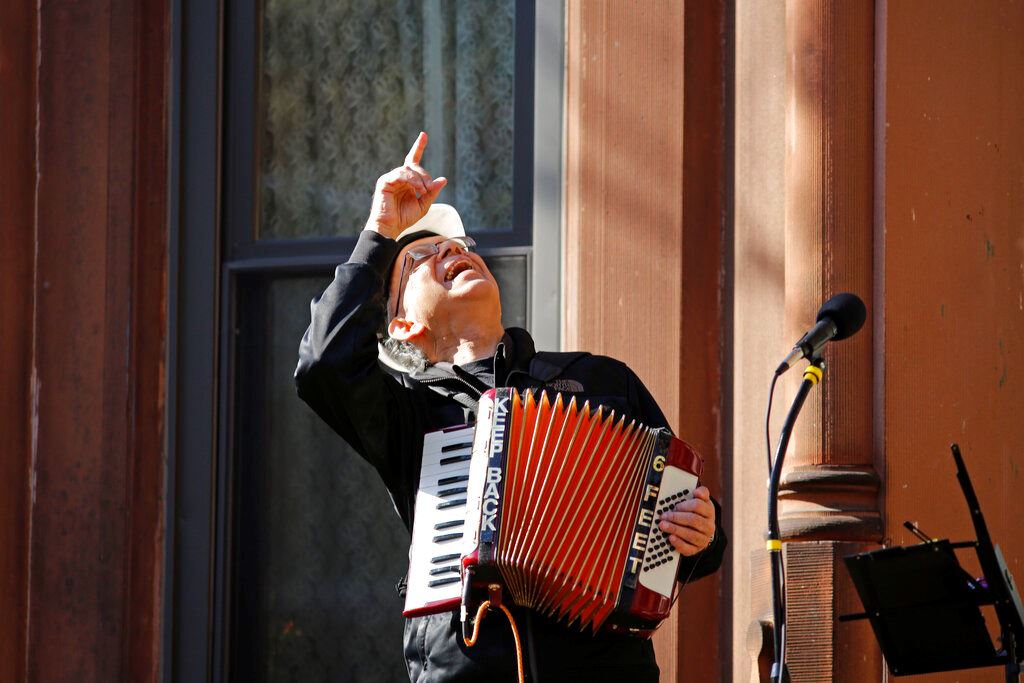 In this Wednesday, April 15, 2020 photo, musician and activist Paul Stein points to the roof as a neighbor gets a bird's eye view of one of Stein's occasional accordion concerts during the coronavirus outbreak in New York. Says Stein, "I try to come up with songs of hope. We need to keep our spirits up. We need hope now. That's what we need to get through this difficult period."AP Photo/Kathy Willens

Stein calls his impromptu concerts the "Emergency Accordion Stoop Extravaganza," or "EASE." He decorated a construction helmet with the words "Accordion Extravaganza" on the front and "Keep Back Six Feet" on the back.

The accordion is not an instrument beloved by all; it has been the butt of many jokes (What's the difference between an accordion and a concertina? I takes longer to burn an accordion.) But Stein loves it, and has been playing since he was 8. He has a vast repertoire of songs, and he sometimes adds the melodica, a free-reed type of large harmonica.

"I'm doing mostly instrumentals. ... a polka, a tango, the 'Hokey Pokey,' and other fun things," he said. "Sometimes 'This Land is Your Land;' 'La Cucaracha,' the Mexican hat dance; Bill Withers' 'Lean on Me.' People like up-tempo things." 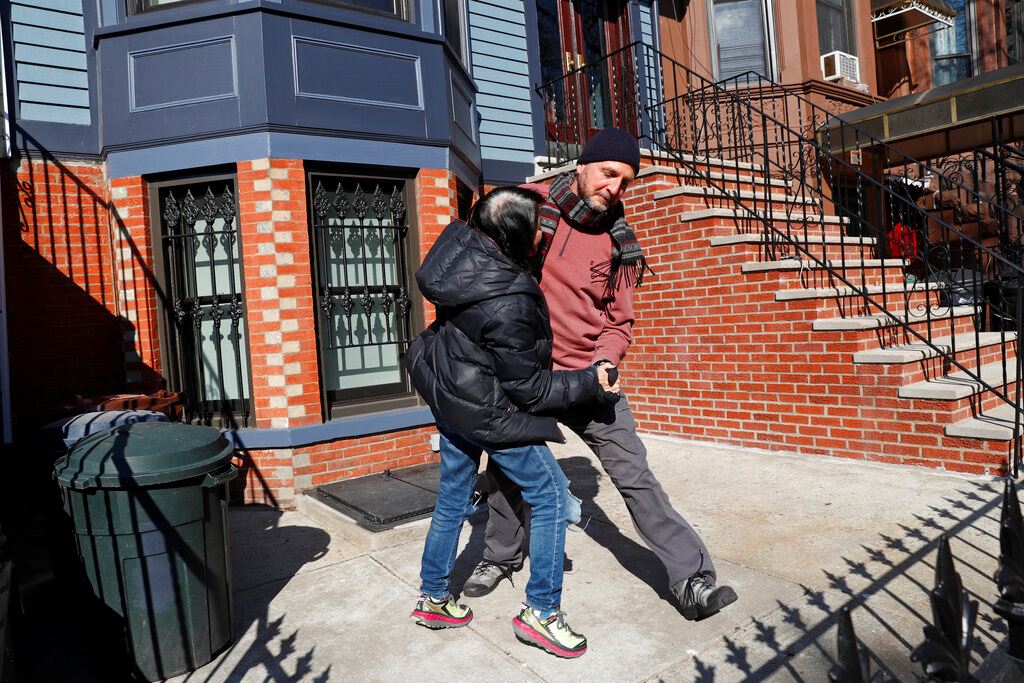 In this Wednesday, April 15, 2020 photo, Tim Sozen, right, and his partner Madeline Chang dance on a small patch of concrete in front of their Brooklyn apartment during a stoop concert by accordionist Paul Stein, who plays from his stoop several townhouses away to lift neighbors' spirits while encouraging social distancing during the coronavirus outbreak in the Sunset Park neighborhood in New York. "We were inspired because the music is so wonderful. Music is so powerful. It's its own language," says Chang.AP Photo/Kathy Willens

His neighbors seem to appreciate his efforts.

"We were inspired because the music is so wonderful … so powerful," Chang said. "It's its own language." 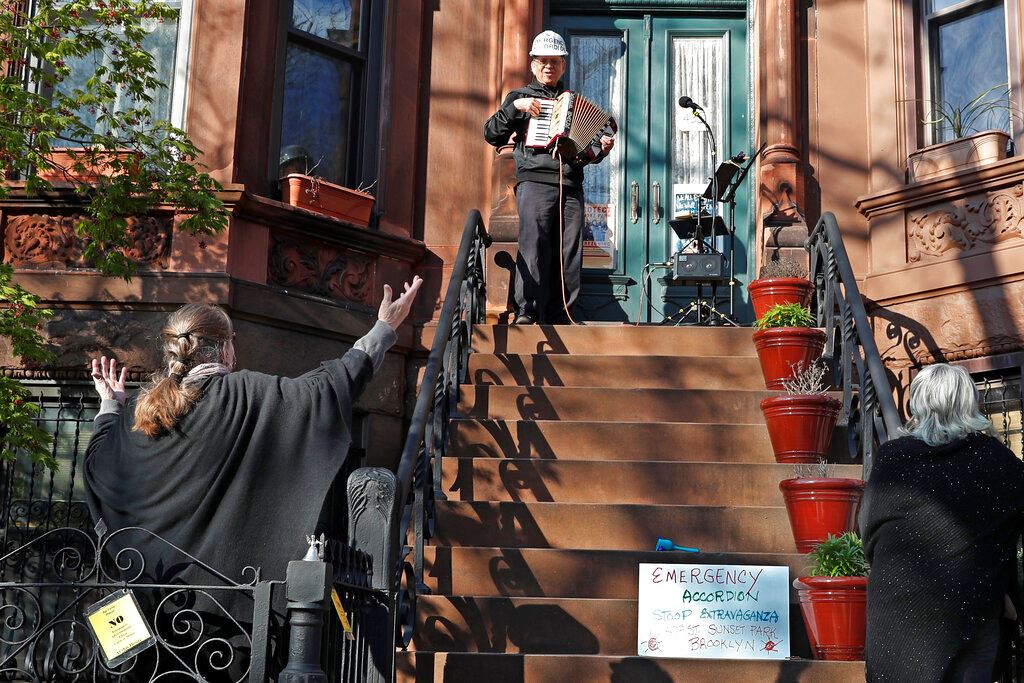 In this Wednesday, April 15, 2020 photo, choir director and neighbor Pam McAllister, left, encourages musician Paul Stein, center, to invent timely words to his songs as Stein entertains neighbors with an accordion concert from his stoop in front of his Sunset Park, Brooklyn home during the coronavirus outbreak in New York. Stein's partner Elena Schwolsky listens, lower right. "I enjoy playing live music for people, and I can do that without leaving my house," Stein says. A longtime political and social activist, Stein is careful to maintain social distancing rules and encourages his neighbors to do the same. "Everyone stays put in their front yards, but can still hear the music, he says. Stein uses an amplifier so neighbors down the block can also hear it.AP Photo/Kathy Willens

Said Stein: "I try to come up with songs of hope. We need to keep our spirits up."

And regardless, "What's more Brooklyn than hanging out with your neighbors on the stoop?"
___
While nonstop global news about the effects of the coronavirus have become commonplace, so, too, are the stories about the kindness of strangers and individuals who have sacrificed for others. "One Good Thing" is an Associated Press continuing series reflecting these acts of kindness.
___
Associated Press religion coverage receives support from the Lilly Endowment through the Religion News Foundation. The AP is solely responsible for this content.