by Nicoleta Lungu from Floresti, Moldova 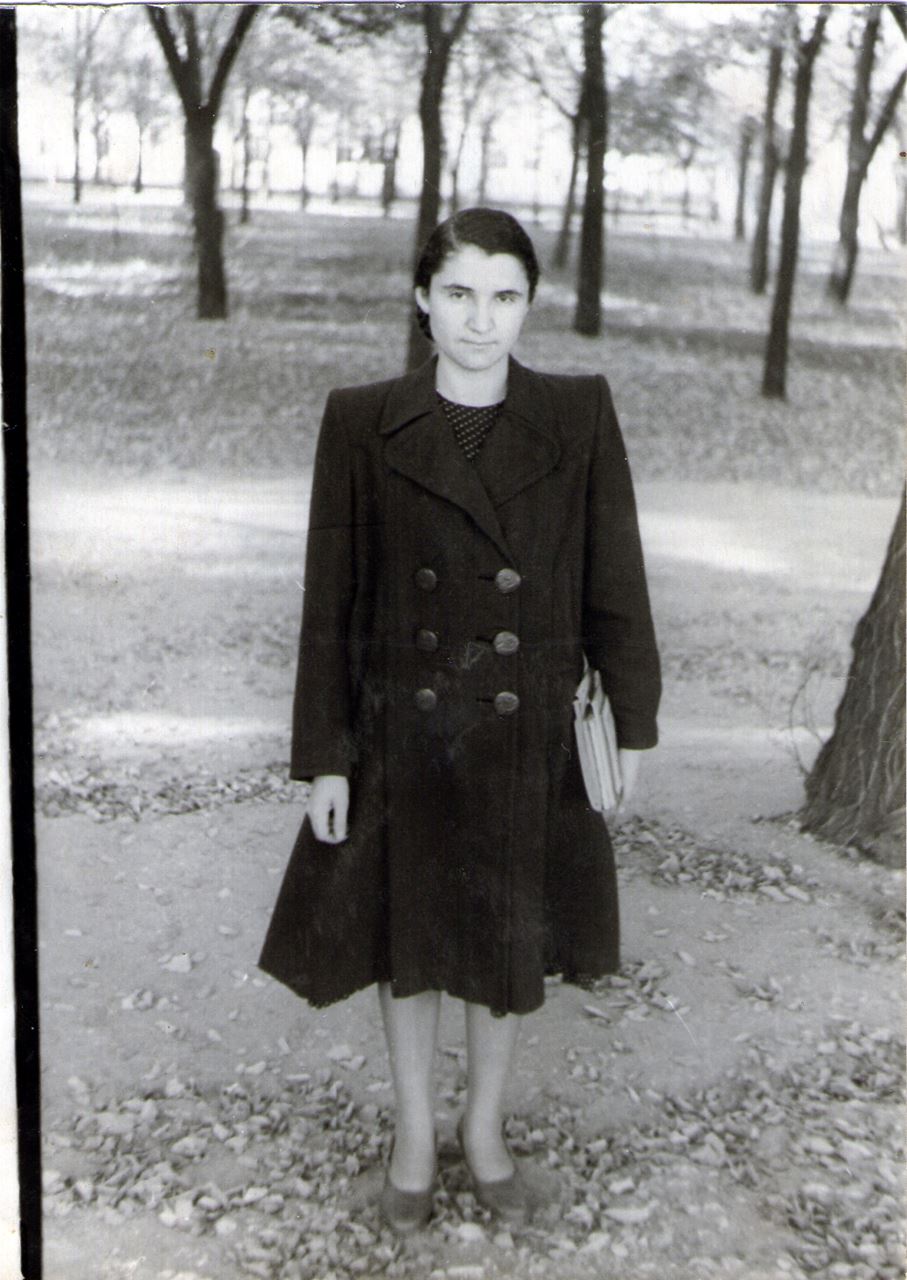 Each of us has a hero, who made a difference in our life, whom we admire and try to follow, in order to be one day like our hero, full of beautiful values.

As for me, my hero is my great grand-mother, Tatiana Mihalache. She was born in Floresti, Moldova, in 1932. Being the youngest child in their family, she with her parents were forcefully deported to Siberia by the Russian soldiers. Then coming back to Moldova, she managed to survive the Great Famine after the Second World War. During her entire life she tried to help the people around her, inspiring them to hope for a better life. The following story is about her cruel childhood spent in Siberia, which she told me when I visited her last time.

It was June 12th, 1941. My great grandmother, Tatiana, was only a 9-year-old girl who was just dreaming that a butterfly was asking her permission to sit on one of the flowers in front of their house, when suddenly she heard someone was hardly beating on the door. Her dad, Vasile, didn't get the chance to open up; they tore the door. It was two big Russian soldiers with rifles. They made them understand in Russian to dress up quickly and come out.

Her mother, Zina, was so quiet but extremely scared. Her dad only shook his shoulders. Since he didn't have his right hand, it wasn't easy for him to get dressed. Usually he was helped by Tatiana and now he could not end on a button.

-You may not get close! the soldier yelled to Tatiana, who wanted to help her poor father. Little Tatiana began to tremble.

-Who are these people who have come into our house like bandits?! she asked herself.

They didn't let them take even a bread crumb. In Balti they boarded them on a train. They arrested a lot of people, from all the surrounding villages. So, a whole month they had to stay in this train, which was deporting them to Siberia. In the meantime, the horrible Second World War began.

One evening, the Russian soldiers boarded the children and the women from Moldova in a boat and forced them to cross the Obi River for another month and a half. That's how they got to the depths of Siberia, the land of cold and death camps. There in Siberia her father, Vasile, was deported to the nearest concentration camp, but Tatiana and her mother were left to live in a little village not far from a big forest. But unfortunately, their life there was not easy at all.

It was autumn when Tatiana’s mother was arrested, because she had stolen some bread crumbs from the canteen because she wanted to feed her starving little daughter.

-Do not take my mom! What are you judging her for, for these little crumbs?! asked Tatiana.

In such a way little Tatiana rested alone. It was a very hard time for her. Time passed and little Tatiana was alone in the depths of Siberia. Then after two years a telegram came from the prison: "Send me my sandals. I kiss you, Mom."

-How can I send them to her, if she went in her sandals? Tatiana asked herself.

The next day she heard:

-Your mother's coming! Tatiana ran out in the road. Her heart was beating so loudly that it was difficult for her to breathe.

Her mother was barely walking, leaning on a stick. The Russian soldiers had let her go because she was so sick!... When Tatiana  saw her she began to cry, and her mother began to kiss her and then to kiss the land.

In the meantime, the winter came... Tatiana had no time to go to school. Her mother was so ill. She was staying in the bed all the time, and the poor 12-year-old girl had to do all the housework and take care of her sick mother.

-Mom, put your head on my knees and say something about Dad...

With her father's face in her heart, warming her hands to the mother's breath, when she was speaking, Tatiana was falling asleep. The single happiness in her little life was her mother, who was whispering more and more, refreshing the memory about her dear father. That's how the days and nights passed in their house buried in the snows of Siberia.

One day when Tatiana arrived at home, it was getting dark. Suddenly she heard her mother’s steps. It was very strange because her mother had been in bed for a half a year. As she opened the door, she heard someone walking.

-Who's walking with the stick?

-It’s impossible, mother, you cannot stand up alone, and you cannot hold the stick in your hand!

-Look, when you were at your aunt Varvara's, Saint Vasile, Saint Gheorghe and Saint Peter entered our house with three white horses and gave me time till the next Sunday night. When the cock will sing the second time, I will go with them, my little girl!!! These words scared little Tatiana a lot.

-Mom what are you saying? Do not leave me alone. Who am I going to stay with, mom?

-With the forest my poor daughter!

-Do not die, Mom! she took her hands and began to kiss them.

-No, no, I'm not dying today. Tomorrow, when the cock will sing the second time, I will go with them... Do not be afraid, you are a brave girl. Please after my death return to Moldova and find your elder sisters and father!

-If I do not open the door, your soul, mom, will stay with me?

-My soul will stay with you all your life, please take my soul with you to Moldova!

That night Tatiana did not sleep at all. The next day her mom died. She understood that she remained alone in the snows of Siberia. Since that day, she could not enter their house. She was sleeping in the forest near her mother’s tomb.

One morning she decided to leave for Moldova and find her elder sisters. It took her a whole year and a half to arrive in Moldova. In the meantime, the horrible Great Famine began. Like a wounded deer, chased by hunters all the way, she entered her native town, Florești. It was the great Sunday.

-Why is the village so gloomy? she asked herself.

-Who are you, girl? Where do you come from? Nobody knew her.

When she arrived at her elder sisters’ house, she began to kiss the door. Only their one-eyed dog recognized her. Tatiana didn't have powers even to open the door and she fell down.

It was incredible and they all began to cry. The next day when they were staying around the table and speaking about their mother’s death, somebody knocked hardly at the door:

-Tatiana Mihalache, you're under arrest!

The Russian soldiers took her to the prison of Balti town. There she was imprisoned for three months. One day, someone in the back asked her whispering:

-Are you Tatiana Mihalache?

-Yes, she answered, but she didn't turn her head.

-Yes, and she still didn't turn her head.

-Well, I was with your poor father in the same concentration camp in Siberia!...

The next day, Tatiana looked for that old man, but she could not find him. The next year Stalin died and everybody had the possibility to go home. One day when she was in Balti, she saw that old man from the prison.

-Where is my father? she asked him.

-Ah......you're Tatiana, aren't you!? I have to tell you something, but here I fear. Stalin died, but his ears still remain!

He took Tatiana’s the hands and kept looking around.

-My name is Nicolae Moldovan. I was with your father, Vasile, in the same camp in Siberia.

The man began to cry.

-God, forgive this poor man! What a terrible death your father had in Siberia. I was in the same camp with him. We were taking out coal and he was working with us. As he was a man with only one hand, it was very hard for him to work. He got very ill and the Russian soldiers decided to let him look after their pigs. One day when we were returning from the coal, we saw him. He was so bad and weak, only his bones were left! One night the soldiers told him to go and feed their pigs in the pigsty. Nobody knows what happened, but he fell down there in the middle of the pigsty. I tried to lift him, but the guards did not let me. They took him and threw in the middle of the hungry pigs, letting him to be eaten by them. It was horrible! Lord, why did you give me the eyes to see this horrible death! cried the old man.

-The next day, when we returned from the cool, we saw only the rags of your father’s clothes. From that time these pigs became wild.

-Oh my God! Tatiana could not stop herself from crying.

All that day long it was raining. It was raining in the country and it was raining in Tatiana’s soul too. She was kneeling all that day long and crying at the sky! But suddenly the rain stopped and she saw a beautiful rainbow. A hot thrill drifted through her soul when she saw this beautiful rainbow. It was like our Moldovan flag, the Tricolor! At that moment she saw her father’s face reminding her how much he had loved this colorful Tricolor! From that time she began to hope, to hope into a better life and inspire this hope to people around her.

This is the story of my HERO, my great grand-mother, Tatiana Mihalache, who is still alive after a such a difficult childhood. She is a real HERO for me, full of courage, hope and love! During her entire life she tried to help the people around her, inspiring hope, and even today when she is so old she always tries at least to give us good advice or inspire hope for a better life. She made a difference in my life; she is like a family angel for us. I admire her, I always take her as an example, I try to follow her, in order to be one day like her, MY HERO, full of beautiful values!