The Angel of the Eternal Battlefield

by Kyle Nagasawa from San Diego, California in United States 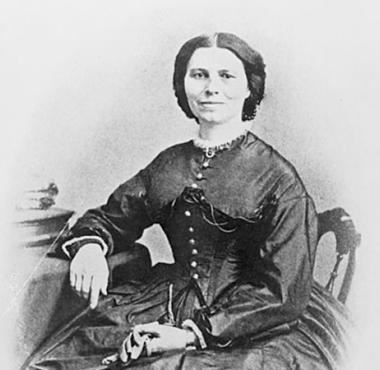 Barton's Portraithttps://www.civilwar.org/learn/biographies/clara-bartonWell-renowned American mythologist Joseph Campbell once said, “A hero is someone who has given his or her life to something bigger than oneself” (Campbell). The term “hero” is a term often mentioned in society; not only is it used to describe superheroes with unearthly powers, dedicated to ridding the world of crime but it is also used to describe the people who donate a great deal of time, energy, and attention to major world problems. Based on the latter definition, anyone can achieve hero status. In a speech, Paul Getty discusses proverbs: “Proverbs receive their chief value from the stamp and esteem of the ages through which they have passed”(Getty). Proverbs and heroes are alike in that they often serve as a figure of inspiration for others; like a proverb, heroes are characterized by their everlasting stamp of positive effect on society. Furthermore, heroes are those who devote their lives to the benefit of others and not themselves. The admirable heroes throughout history are determined to selflessly carry out courageous acts, driven by their desire to better society both in the present and in the future. 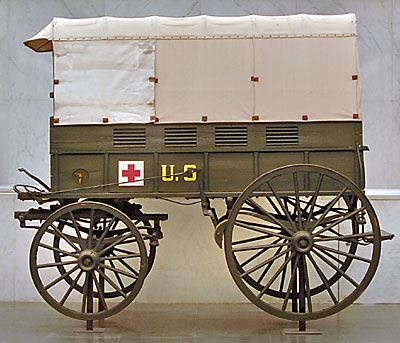 Barton's Red Cross Ambulance from 1898https://americanhistory.si.edu/press/fact-sheets/clara-barton%E2%80%99s-red-cross-ambulance-1898A hero can be represented by the young American girl who sat on the worn out bench of her family’s Oxford farm, cautiously watching the actions of her four siblings as they carried out their tedious farmhouse chores. Too overwhelmed with anxiety from making a mistake and causing inconveniences for the others, she drowned in diffidence, too afraid to carry out her chores. This was the childhood of Clara Barton: a childhood only associated with bashfulness. However, as she matured, she conquered her fears through her parent’s encouragement to help people in need. When supporting others, she gained confidence in herself and what she could accomplish, as it underlined her capabilities. After being motivated by her parents’ suggestions, she chose to educate children, which allowed her to help others. Nonetheless, her career ended with the start of the Civil War. Feeling uneasy about all the preventable sufferings, she persistently requested to join the army to deliver medical supplies for the wounded. With the close of the Civil War, she moved to Switzerland, where she discovered the International Red Cross Organization, already assisting Europeans in need. Supportive of its sole purpose to aid those in distress, she returned to America, where she endeavored to establish it for the benefit of the American people. Throughout her life, Barton was known as “The Angel of the Battlefield” for her extraordinary acts of courage during the Civil War. Additionally, Barton was renowned for her ambition, which was the basis for her success, as she refused to be deterred by obstacles. She was driven by her kind-heartedness and sincere desire to improve the lives of others. Barton not only harnessed determination to overcome difficulties but also utilized courage to rise as a savior to those in desperate need of medical aid and emotional support during times of hardship; through this, Clara Barton created a legacy as an inspiration to others both today and in the future. 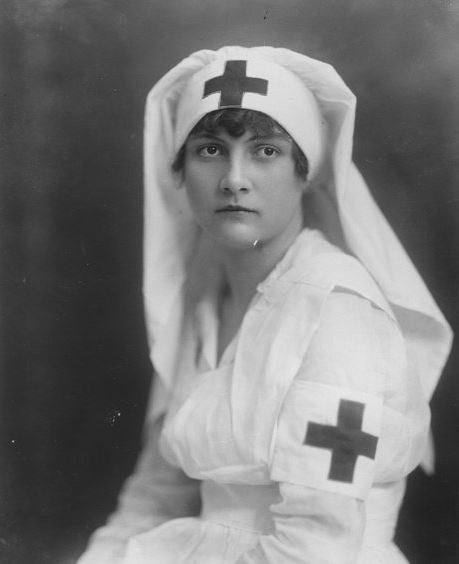 Barton in her nursing uniformhttps://www.kshs.org/kansapedia/red-cross/16678Through her determination, Barton successfully overcomes obstacles and topples seemingly impossible tasks, proving her worthy of heroship. When she strived to gain permission from the United States Government to deliver medical supplies on Civil War battlefields, she was constantly denied because of her gender. However, “She prodded leaders in the government and the army until she was given permission to bring her voluntary services and medical supplies to the scenes of battle and field hospitals on August 3, 1862” (MacLean). The author writes how Barton “prodded,” both government and army officials, which means that she constantly annoyed others. Ultimately, this emphasizes that she was unafraid to infuriate men of high power during a time when women were seen as the inferior. Barton fully acknowledged that her constant actions could anger the government and army; however, despite her setbacks, she persisted in experimenting with various ways to gain permission to aid the wounded. By volunteering her time and effort to fight the oppression of women in order to make herself available to the soldiers, Barton proves that she is a hero. After Barton gained access to the Civil War battlefields, she worked as an assistant to professional surgeons. During one situation, she recalled just how overwhelming the tasks were for her and the many other medical personnel: “The tables jarred and rolled until we could hardly keep the men on them, and the roar was overwhelming. After a while, I looked around, and to my surprise saw all the surgeons gone, except one man” (Barton). Barton used vivid diction when she described the events as “jarring, rolling, and overwhelming” to portray the chaotic environment that she and the other medical personnel were in. Despite the disorderly work environment and constant threat of danger, which was so extreme that it caused “all the surgeons...except one man” to quit,  Barton stayed steadfast and determined to remain in her position. Her ability to endure pandemonium shows her persistence because, in times of hardships, she would strive to disregard her anxiety and ensure the wounded were receiving the treatment they needed. Clara further displays persistence following the Civil War when Barton desired to gain the United States Government’s consent to establish the Red Cross Organization in America. She spent time “discussing the Red Cross with senators and congressmen... Barton did not hesitate to tap the emotions as well as the logic of those she had hoped to convert to the Red Cross cause... Neither did she balk at peddling her wartime connection” (Pryor 193). She knew that establishing the American Red Cross would be a difficult task, as many others had failed in the past. Pryor explains how Barton met with numerous congressmen and resorted to many methods of persuasion, appealing to them emotionally, logically, and patriotically. She even guilt tripped various men, reminding them of her works during the Civil War. Even though she knew failure was likely, she carried on, investing her time and effort to ensure she would reach her end goal of creating a disaster relief program for those in need in America. With great persistence, dedication, and a firm desire to help others, Barton overcame obstacles that posed a threat to her success in helping others. 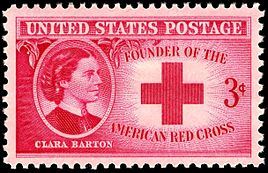 1948 Commemorative Stamp created to honor Bartonhttps://library.uthscsa.edu/category/treasures/page/2/Moreover, even through the most precarious situations, Barton exemplifies bravery through her risky actions, which allows her to aid others in dangerous situations and rise as a hero. For example, when Barton was young, she spent time aiding those in her community. During one instance, Barton cared for the ill: “During a smallpox epidemic that occurred in her early teens, she and a neighbor girl nursed several families until she herself came down with the disease” (Pryor 17). Smallpox is most associated with its deleterious effects, causing its victims to develop disfiguring scars and catch deadly flu-like symptoms. Pryor explains that even though smallpox was spreading rapidly, Barton was fearless in aiding the infected, aware of the high chance of catching the debilitating disease. She could have died, but she was bravely ready to give up her life to lessen the suffering of her neighbors. Furthermore, Barton’s bravery was shown during the Civil War, where she was aware of the hazards associated with being on the battlefield: “‘I always tried... to succor the wounded until medical aid and supplies could come up - I could run the risk; it made no difference to anyone if I were shot or taken prisoner’” (MacLean). MacLean discusses how Barton wrote the idiom “run the risk” to emphasize Barton’s acknowledgment of the possibility of being captured and harmed by the enemy. Furthermore, she writes how “it made no difference… if I were shot or taken” to highlight that Barton was undisturbed about the pernicious effects that could occur to her. This underlines that Barton was courageously willing to sacrifice her own life on the battlefield in order to guarantee the medical treatment of the soldiers. This shows Barton is worthy of hero status because she actively devoted her life for the benefit of others. Additionally, she exhibited bravery when she visited Havana, Cuba, in 1898 during the Spanish-American War. There, she witnessed Spain destroy an American naval ship and injure the passengers. Despite the possible dangers presented, Barton volunteered herself to support the wounded. Pryor writes, “Barton, who had launched on board with the captain only two days before, was shocked when a ‘terrific burst of thunder-and the fiery balls playing in the heavens, told us that something had happened.’ … she wired a short message to the President ‘I am with the wounded’”(Pryor 393).  Pryor quotes Barton alluding to Revelation 13:13 of the Bible when she said “the fiery balls playing in the heavens.” By using this allusion, Barton made references to the three beasts in the Unholy Trinity that caused the biblical apocalypse of Tribulation, an event that is renowned for the terror During this event, the moon turned to blood, earthquakes rampaged the lands, and giant monsters wreaked havoc upon the living. Death was everywhere. Pryor uses this allusion to emphasize the extreme trauma Barton chose to experience in order to help others. Additionally, through her explanation about being “with the wounded,” Barton demonstrates that she was with the wounded soldiers on the battlefront, both physically and emotionally; in this manner, Barton suffered as she watched her patients succumb to slow, painful deaths. However, despite being terrified of the dangers, she continued to risk her life in the battle to comfort and support the wounded. Through her devotion to aid others, even when fearful of her own safety and well-being, Barton exemplifies bravery.

As accentuated by Clara Barton’s courage and determination to support others in need, Clara Barton rests as the epitome of a hero. During times of war and suffering, Barton sacrificed her safety and well-being for the benefit of those facing adversity; she ultimately gave up her life “for a cause bigger than oneself.” Additionally, when Barton was prevented in pursuing her goals to aid others, she stayed determined, finding every method to support others. Not only did her actions help those around her but they also created her legacy: the American Red Cross. Since her death 70 years ago, the American Red Cross remains strong, responding “to about 70,000 disasters” annually (American Red Cross). In this manner, Barton lives on to help others even in the future. Ultimately, Barton created a long-lasting inspiration that teaches people that if one has a strong desire to help others, one can overcome obstacles to accomplish anything. The Makers Team explains this when they write, “Sara told me that the word ‘nurse’ implies years of training in the medical field. Clara Barton, in fact, had very little to do with the medical field until the war broke out. Sara then goes on to say that ‘she was simply a determined humanitarian, who saw need [sic], and did whatever she could. She just had a liberal arts degree’”(Makers Team). Sarah explains how Barton was just an ordinary person without qualifications. Despite this, she still accomplished much, becoming the “Angel of the Battlefield” and the founder of the American Red Cross. This demonstrates that regular people without superpowers, like Barton, can become a hero to others. Just like the famous words of Joseph Campbell, anyone can make a long-lasting “footprint” in the sands of time. It just takes acts of selflessness to make a difference in others’ lives and effectively dedicate one’s life to a movement greater than their own.