The body cam revolution: What it has, and hasn’t, accomplished

Body cameras aren’t a perfect solution to the need for police accountability. But they are still an important way to provide the public at least some facts about crucial law enforcement actions.

AUGUST 9, 2019 - SAVANNAH, GA. - When former Baltimore cop Peter Moskos returned to his old beat during a ride-along recently, the banter was lighthearted until his partner turned to him and said, “Body camera on.” 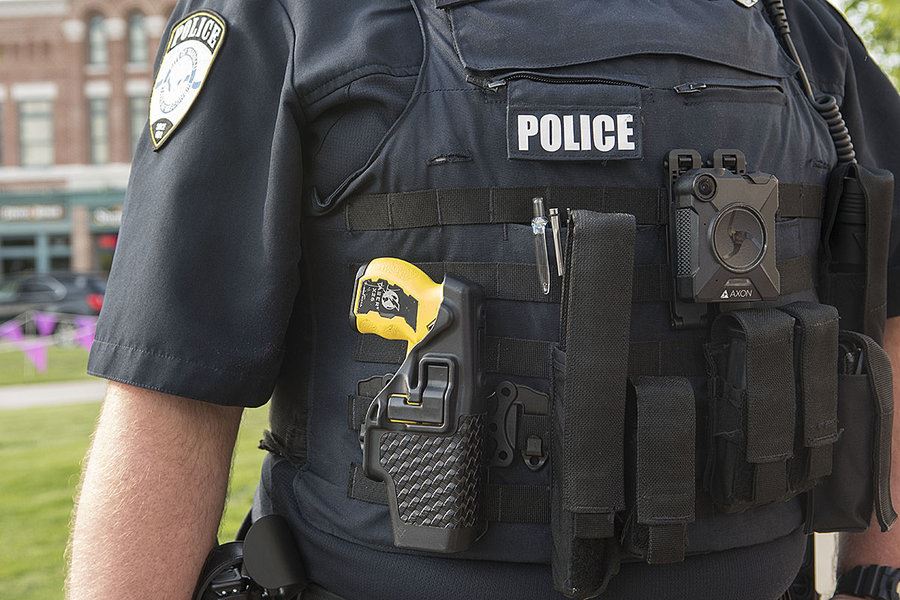 A police officer wearing a body camera stands in the downtown area of Wausau, Wisconsin, June 6, 2018. Body cameras have become an integral part of policing in recent years.Alfredo Sosa/Staff/FileThe mood in the squad car darkened. “You instantly thought, ‘God, what might I say?’” says Mr. Moskos, now a criminologist at the John Jay College of Criminal Justice in New York.

In that moment Mr. Moskos understood some of the fundamental changes to policing and society brought on by the police shooting of a young black man, Michael Brown, in Ferguson, Missouri, five years ago.

Body cameras are one of those changes. In law enforcement, they’ve gone from rare to ubiquitous. Roughly two-thirds of all U.S. police departments now film regularly via silent eyes clipped to a shoulder strap or shirt pocket.

The cameras have put a lens on a job that’s already fraught, difficult, and often thankless. And some say it is all for naught. Indeed, studies show the body camera revolution hasn’t curbed police shootings of unarmed Americans, nor has it led to more prosecutions of police officers for misconduct.

Yet the cameras, veteran police monitors say, have nevertheless had profound and often positive impacts on policing, if in subtle ways. For officers, they have become important backup in a video era when controversial arrests go viral. And for a public demanding answers about police shootings of Americans, particularly people of color, they provide fact-studded narratives that, while rarely complete, offer a way forward.

And they have provided crucial evidence in a few egregious cases of law enforcement misconduct.

“We have seen how easy it is for people to view or frame facts differently, and we’ve seen how difficult it is to make any progress on any issue where people aren’t working from the same set of facts,” says Christy Lopez, a former Department of Justice official and primary drafter of a searing Justice report into Ferguson’s policing and court practices.

“[Body cameras have] the unique potential to reduce those sorts of instances where there’s an inability to take action because people can’t agree on the facts,” adds Ms. Lopez, currently a visiting professor at Georgetown Law School.

The revolution happened in a flash

The spike in body cameras occurred in 2016, when 25 large U.S. cities bought them. That time frame means they are still relatively new. At least 16 states now have rules for how to maintain citizen privacy with body camera footage, and how the videos should be released to the press.

The expectation among many police critics was that widespread adoption of cameras would curb police misconduct, lead to more prosecutions of officers on murder charges, and reduce the number of killings per year.

Police in the line of duty shot and killed nearly 1,000 people in 2018, according to a database kept by The Washington Post. According to data compiled by The Guardian, that’s about the same number as in 2014, the year Mr. Brown was killed, unleashing violent protests that culminated in the Black Lives Matter movement and an increased focus on police accountability.

To be sure, early on, industry-led studies had shown improvements in police relations and use-of-force violations when cameras were filming. But a more comprehensive and neutral study carried out by the Washington, D.C., Metropolitan Police Department in 2017 showed fairly conclusively that officers with live body cams used force and faced civilian complaints at about the same rates as officers without cameras. Another study found that black officers are just as likely to shoot a civilian as white officers.

What’s more, prosecutions of police officers have remained steady at about 10 per year since 2005 – about one officer charged for every 100 deadly shootings. There has been one uptick: Three officers were convicted of murder in the last year, compared with only one since 2005.

“The anti-police crowd thought body cameras would show the inner workings of policing, but it turns out that the inner workings of policing are mundane and often what the cops say,” says Mr. Moskos, author of “Cop in the Hood.” “As that cloak was lifted and there wasn’t that much there, that surprised some people. Like the police radio, the body camera has, in fact, fundamentally changed policing. But it hasn’t been an earth-shattering, groundbreaking thing.”

Meanwhile, public opinion about law enforcement has become only more polarized as the Trump administration has largely ended the Obama era’s focus on federal oversight of troubled and prejudicial departments.

According to Gallup data, the percentage of conservatives who say they have confidence in the police has risen from 60% to 70% since 2014, and the percentage of liberals who feel the same has fallen from 50% to 40% in the same time frame.

That’s happening even amid drastic regional differences in police shootings. For example Mr. Moskos, using data analysis, says a civilian is 15 times more likely to be shot by a police officer in Oklahoma City than in New York City.

Such results “suggest we should recalibrate our expectations” of cameras’ ability to make a large-scale behavioral change in policing, concluded the Washington study.

And many states still have loose rules about when and if to release footage. That means that exonerating videos are often released quickly while incriminating ones are buried behind layers of bureaucracy. Meanwhile, several high-profile shootings – including that of Alton Sterling in Baton Rouge, Louisiana – were filmed but did not result in prosecutions of police.

However, “if you look at the small proportion of cases where officers are actually indicted following a shooting, those do involve video footage,” says Samuel Sinyangwe, a data scientist and activist who co-founded Campaign Zero, a group that proposes policies to reduce police shootings. ”Video evidence is almost a requirement to hold officers accountable, and body cameras can provide that video evidence. But there has not been the scale of impact that body cameras were framed as being able to have.”

In some cases, body cam footage can be exonerating for law enforcement.

Last month, Pooler, Georgia, police Chief Ashley Brown at first declined to release a video that showed the arrest of an older man. A viral video of the arrest seemed to imply police brutality. But after the social media uproar failed to die down, Chief Brown released the body cam video. It shows patient professionalism from officers who find themselves berated by an angry older man wielding a tire iron and telling the officers, “Go ahead, draw your gun.”

“I didn’t see there was anything to defend,” the chief told a local TV station before the footage was released. “I watched the video and they did everything right. I shouldn’t have to explain anything.”

But eventually he released the footage. “It just got to the point they needed to see the other side and quit making assumptions and guesses at what happened and why it happened,” he said.

In other cases, police have belatedly recognized that body cams might have made it easier to deal with the aftermath of controversial incidents.

In Florida’s Hillsborough County, Sheriff Chad Chronister had long questioned the costs and privacy concerns, holding off on ordering the cameras even as the majority of large Florida jurisdictions adopted the technology.

This spring, Hillsborough County deputies shot three people in three separate incidents in which all the perpetrators were allegedly carrying knives and threatening others. Critics noted that none of the shootings were filmed, and that they all were defended with a similar rationale. For some, this suggested that official explanations lacked credibility.

The department put out a call for bids this summer to begin equipping the force with cameras.

“I am confident in the professionalism and integrity of our deputies, but I recognize the need for transparency to our citizens, particularly as it relates to the use of deadly force or the drawing of a firearm,” Sheriff Chronister tells the Monitor in an email.

Perhaps most importantly, body cameras don’t just show the scene as an officer observes it. They also shine a dispassionate lens on the profession itself. Camera footage gives police captains and majors a chance to look at objective evidence of officer performance, making it easier to promote police officers who exhibit professionalism, tact, and restraint in the field.

Initially, the shooting of African American teenager Laquan McDonald in Chicago was widely defended by police officers. But after footage of the shooting was finally released, one Chicago officer told Mr. Moskos that most of his fellow officers eventually agreed that it “was a bad shooting.”

And Ms. Lopez of Georgetown Law, who has overseen reforms in troubled police departments like the ones in Oakland, California, in New Orleans, and in Ferguson, recalls an internal affairs investigator being rocked by the 2015 shooting of Walter Scott in North Charleston, South Carolina. The police officer involved, Michael Slager, is now in federal prison for manslaughter.

“Until that [investigator] saw it on video, they were not able to believe that a police officer could do such a thing,” says Ms. Lopez. “That’s why it is difficult to discount the importance of body cameras, even if you can’t point to fewer shootings here or less misconduct there.”