by Tyler Lugtu from San Diego, California in United States 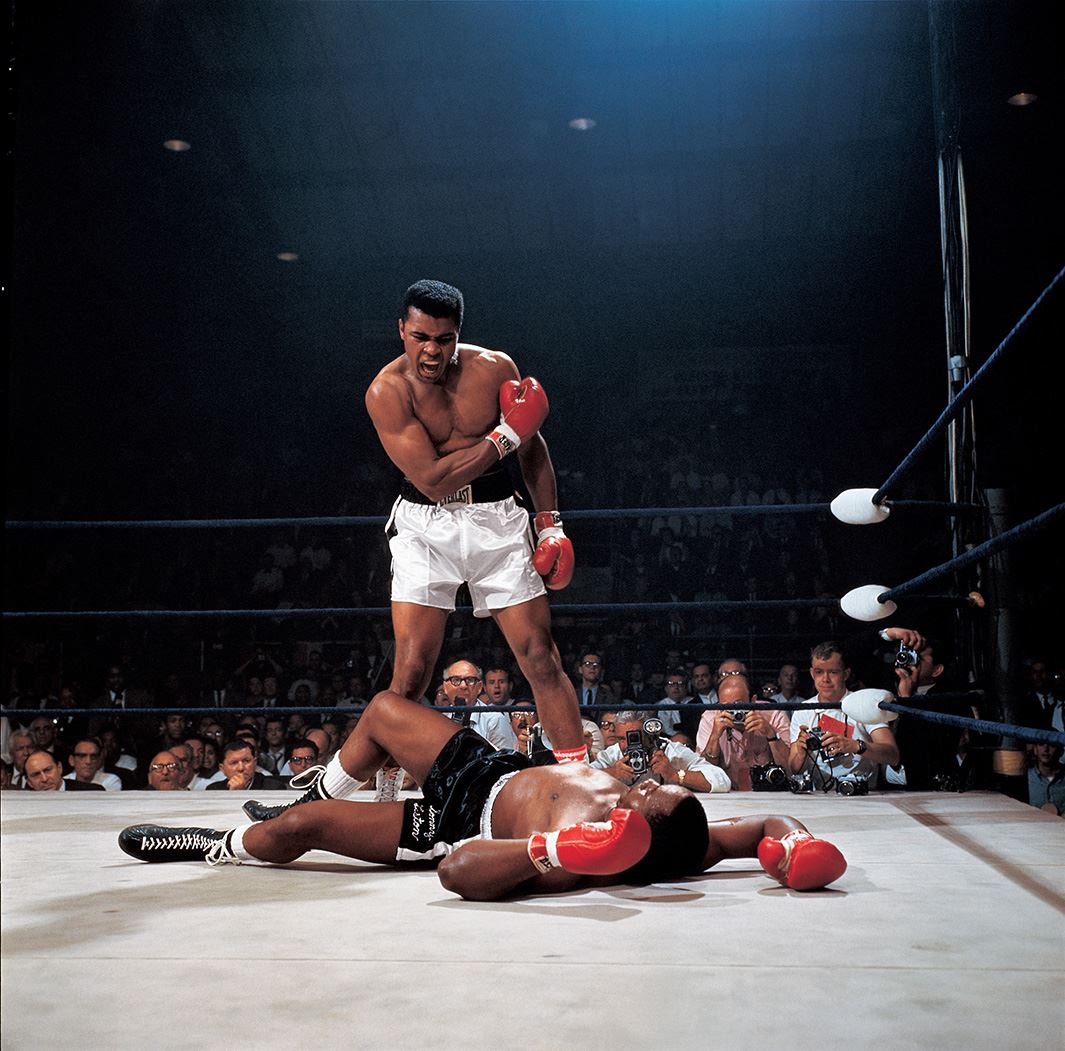 Muhammad looks down on Sonny Liston after knockouthttps://www.slate.com/articles/sports/sports_nut/2015/05/ali_liston_50th_anniversary_the_true_story_behind_neil_leifer_s_perfect.html “Float like a butterfly, sting like a bee”, A quote that revolutionized boxing and gave birth to the modern boxing we know today. “The Greatest of all Time” was born January 17, 1942 in Louisville, Kentucky. Muhammad Ali’s career boasts 3 world championships and an Olympic gold medal which he later lost due to anger directed to racism. His boxing career started in different way than most boxers, it started when his new hot red schwinn bike was stolen. Ali complained to the police officer Joe Martin (his future mentor)  and told him that “I'm gonna whup whoever stole my bike!”, the officer intrigued in what he saw in Ali decided to train him. After that fateful day the hero we adore and love was born. He then went and captured two Golden Gloves by the age of 18, by then his lyrical charms and taunting was known all throughout. Ali continued to win, he won 3 heavyweight championships and a gold medal. A hero must also possess the power to inspire people of all ages, and has to show the people that he/she cares. And a hero must possess the bravery to do something, being able to sacrifice, and also a charitable person that is willing to give away their fortunes. Ali is a hero because he shows all these three traits and is a good example of hard work can actually mean something in life if you work hard enough.

The first criteria of being a hero is having bravery to speak your true emotions without fear. Ali did that in many occasions, one really memorable one is when he refused to go to Vietnam. Ali was tested by many things and he had to do many things normal people would never do. The biggest test in his life is when he said this without a care or thought for other people's beliefs, ¨I'm giving up my title, my wealth, maybe my future. Many great men have been tested for their religious beliefs. If I pass this test, I'll come out stronger than ever." Ali truly voiced out his feelings when he said this. He was unafraid of the consequences that stood in his way and never broke his principles. Being able to give up your fortunes and never break your principles is truly remarkable. Many people would take weeks to think whether or not they could give up the things they all worked hard for, but Ali did it without a second thought. As time rolled by and Ali kept winning fights, 1960s came about and Ali was given another impossible test, he was going to be drafted. Instead of cowering in fear of the people in power he defied them and did the kind of thing Ali would do. “When Muhammad Ali refused to enter the Vietnam War draft he was stripped of his championship titles, passport, and boxing licenses. He lost an initial court battle and was facing a 5-year prison term. Muhammad Ali was the first national figure to speak out against the war in Vietnam”. Ali gave up his fame and maybe even his prime boxing skills to avoid being drafted to avoid breaking his principles. This kind of bravery was unmatched during this time period, many people back then curl up in a ball and follow the orders given. The Greatest is truly the greatest, for him being able to defy the authority without fear is without doubt a reason why he is a hero. 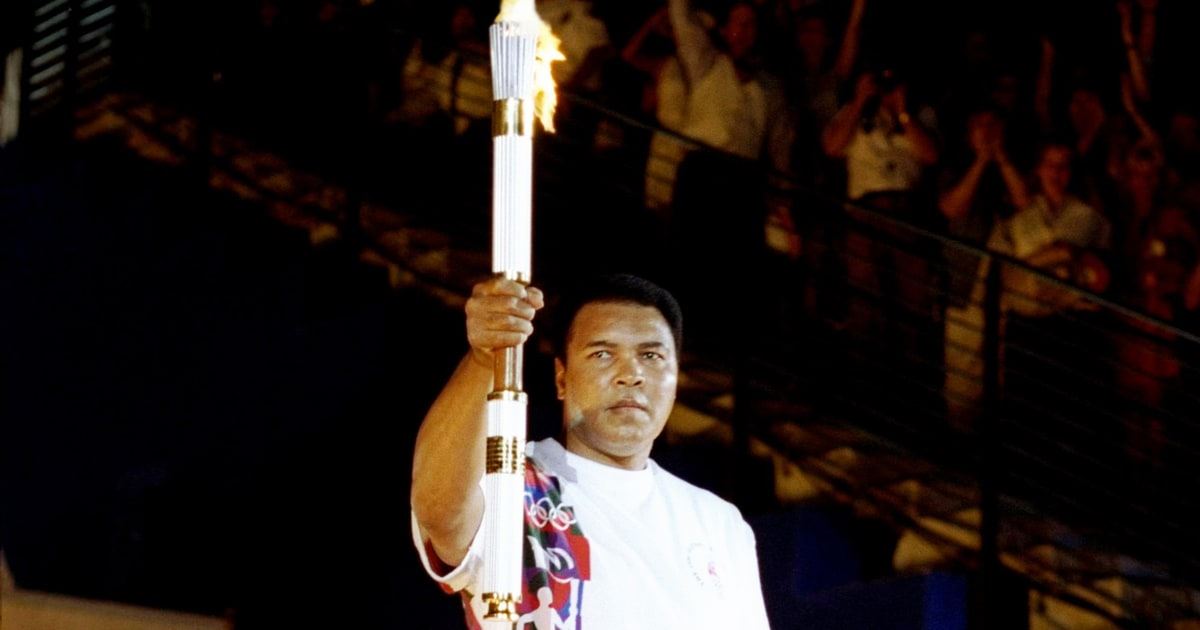 Ali raising the torchhttps://www.rollingstone.com/sports/videos/muhammad-ali-lights-the-olympic-torch-1996-w429746 Giving away your money and kindness is kinda hard for most people, but in Ali´s case he gave away most of it away to help thousands of people. Seeing someone so important to the society who did that on a daily basis is awe inspiring, it kinda makes you want to do it yourself too.  As do all heroes have many traits, Ali also had another amazing trait: he didn't just fight for the wins he fought for the people... ¨ In November of 1970, Ali fought Jerry Quarry in Atlanta. His victory was a symbol of release and freedom to the 5,000 people watching the fight; Ali had personally survived his vilification by much of the American public, but more, he had reclaimed his professional reputation and prominence.¨ As said in here he didn't just fight for the wins, he fought for something bigger, he fought for the people. Having that kind of mindset in a fight will make him overcome all his challenges that stood his way because the people were ready to help him back. Ali inspired people along the way too, his spirit to fight and unwavering belief rubbed into other people. “Muhammad Ali touches countless lives with his unwavering spirit. He was not only a monumental athlete, but also a humanitarian and a global citizen – the legend of Muhammad Ali goes far beyond the boxing ring.” Ali is truly the epitome of greatness his skills and attitude were unmatched and people today are trying to follow his path to success. His success will provide an insight to our own futures, so we strive and complete our dreams that we sought since we were born. In order to be called a hero you have need to think about the people who are struggling everyday to fill their daily needs and try and help them, and Ali did just that, he thinks of the pain and sorrow people who struggle and tries to help them. 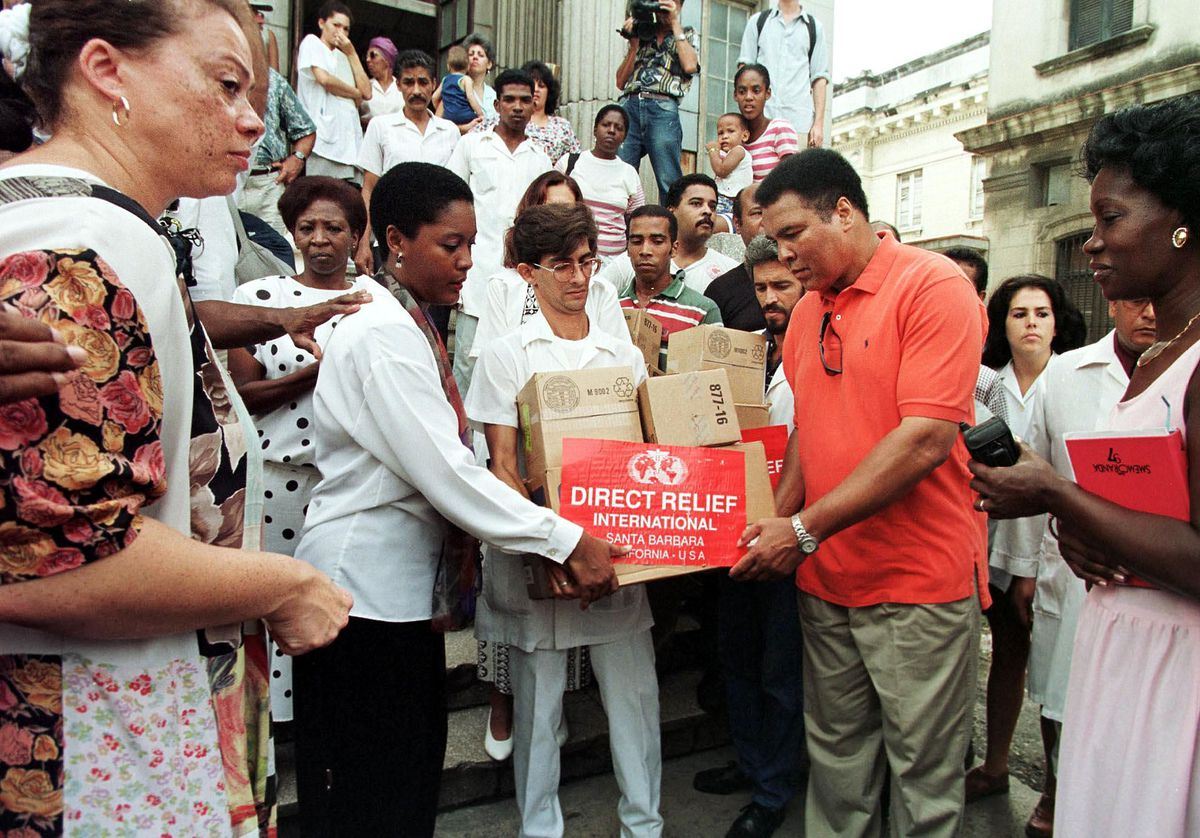 Ali donating foodhttps://mashable.com/2016/06/04/muhammad-ali-charity-legacy/Ali exhibits all the three qualities of being a true hero, he has the bravery to do something, can sacrifice, and also is charitable that is willing to give away his fortunes. He did this throughout his career, and all his hard earned money was donated to many charitable services. Ali exemplifies the true nature of being a hero, he has the ability to do many things with just his words, and his characteristic and stubbornness to keep going was sought by all people. This stubbornness helped out in many different categories, one of those categories was racism. He kept fighting for the his people to be free of racism, he truly wanted them to be free and expressed his emotions. Legend has it that by expressing his emotions he ends up throwing his gold medal from the Olympics in a river. This single action showed how he truly cared and did things many athletes can never accomplish in a lifetime. Ali’s actions to try and improve lives of the segregated is respectable and gallant of him, many people today would try to follow his footsteps to become a better person. But like all good stories end Muhammad Ali’s story ended on June 3, 2016, he left a legacy that will live on forever and never will be forgotten.