The hottest ticket in Canada: A noisy library with much more than books

Think of libraries, and you think of books. But what are they really there for: community, learning, exploration? Calgary is the latest city reimagining how to serve those needs, with a library that’s an architectural marvel, too.

AUGUST 29, 2019 - CALGARY, ALBERTA - It’s the week of the Calgary Stampede, one of the best-known rodeos on the North American circuit, drawing over 1.27 million visitors this year. 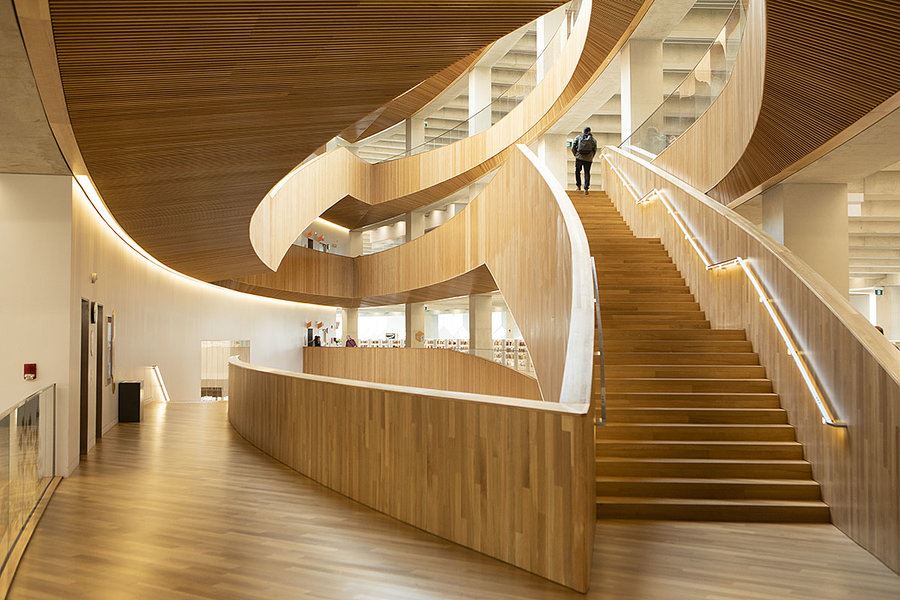 The new Calgary Central Library in Alberta has drawn more than a million visitors since it opened in November 2018. The $185 million, six-level building includes a encapsulated light rail line and a stairway that spirals upward 85 to the skylight.Melanie Stetson Freeman/StaffBut first, Robert Sulea has something more pressing to show his mom, who is visiting from southern Michigan: the library. “It’s amazing, it’s absolutely beautiful,” he gushes as the pair look up to the oculus skylight, which bathes the building in summer sunlight.

Young and sharp-looking, Mr. Sulea, who works in the oil and gas industry, doesn’t look particularly bookish. But then again, Calgary’s new Central Library is not really about the books. It’s the new place in Canada right now, an architectural gem so unique that a light rail train runs through its foundation. Built in a fashion that recalls a ship, it also stands as a show of resistance for an oil city that’s been dragged into a multiyear slump.

“When the library was begun the city was in a boom situation. But [amid recession] there was an insistence that it wasn’t going to be dumped,” says Aritha van Herk, an author and writing professor at the University of Calgary. “Now that’s Calgary. ... It’s the energy of this city and its determination to always move forward. It’s not a surprise that this library is shaped like the prow of a ship moving ahead.” 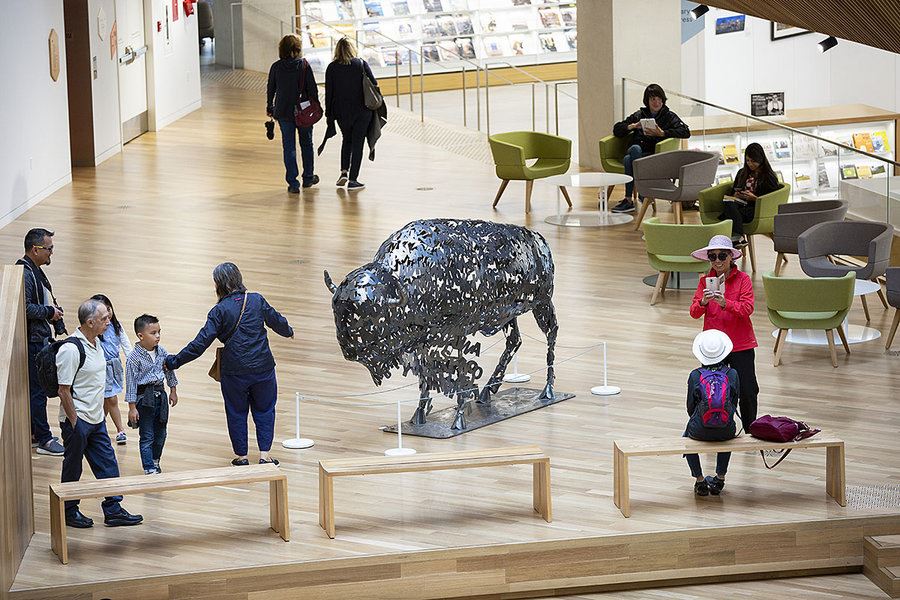 Lionel Peyachew's 'Education is the New Buffalo' stands in a concourse at the Calgary Central Library. One of the First Nation artists featured at the library, Mr. Peyachew chose to honor the buffalo as the universal symbol for all indigenous people and as a legacy for survival for all cultures.Melanie Stetson Freeman/StaffGiven harder times – often measured by the nearly 25% vacancy rate for downtown offices – the $245 million (Canadian; U.S. $185 million) project could appear incongruous.

But Sarah Meilleur, the library’s director of service delivery, insists that the decline makes the new addition more relevant than ever. “Public libraries can be seen as a refuge when people aren’t going to work anymore,” she says. “They can use the computer, they can use many of the digital resources that we have, as well as gain new skills.”

Well before 9 a.m., when library doors open, a crowd has already formed. Ms. Meilleur takes visitors on a tour, pointing out the highlights of the building – starting with the exterior archway, built to echo the Chinook arch, cloud formations unique to Calgary as warm winds come over the mountains from the west in wintertime. In the lobby is the “book-scalator,” the 21st-century mode of book-returning that’s a hit among kids. 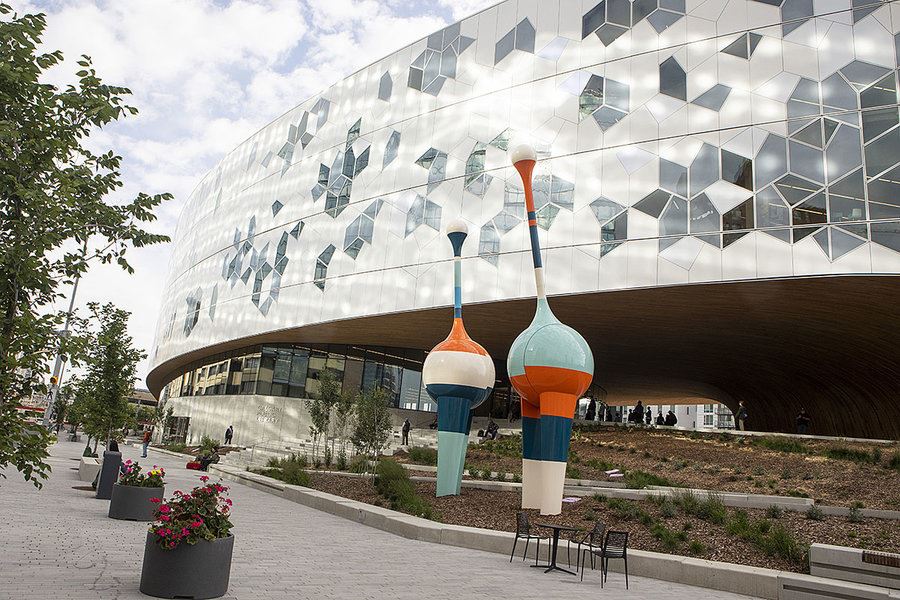 The oval-shaped Calgary Central Library uses translucent fritted glass panels on its façade. The sculpture 'Trio,' by artist Christian Moeller, incorporates pendulum-like movement. One of its three pieces is located on another side of the building. Mr. Moeller's works were partly chosen for their whimsical quality.Melanie Stetson Freeman/StaffWe walk past meeting spaces, where anyone with a library card can book a room – a member of the Persian book club or the board of the Ultimate Frisbee league. There are recording studios for budding podcasters. There are lockers to check out and store laptops and language and orientation services for new immigrants.

We are quickly ushered through the teen area, to not pollute the space with adult presence. “On a Friday night there can be upwards of 100 teens spending time in the library, which is pretty incredible, to think that the library has become a destination for teenagers,” says Ms. Meilleur. “We’re cool.”

Libraries are apparently cool among millennials too. A 2017 Pew studyshowed that 53% of the youngest adults in the U.S. say they used a library or bookmobile in the past 12 months, the highest percentage among age segments. 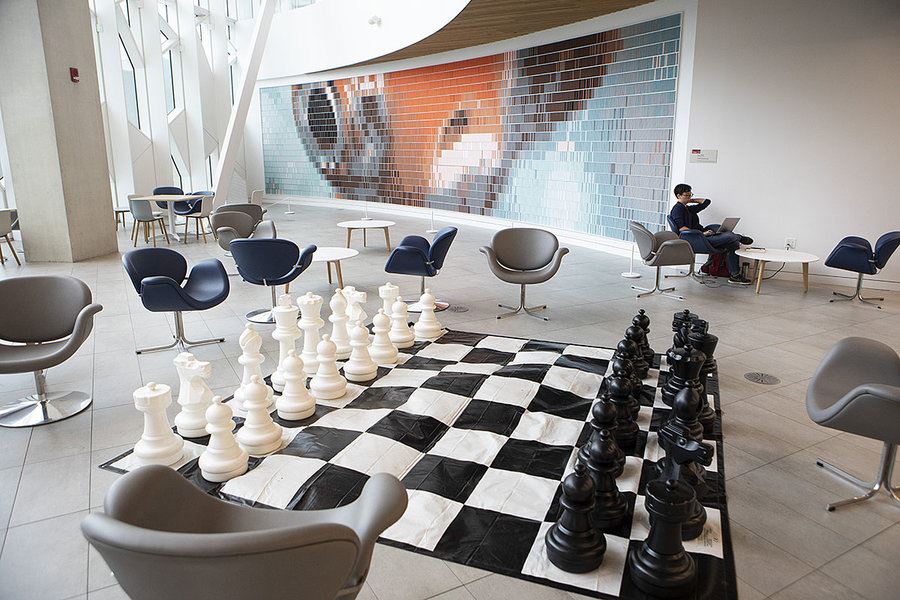 An oversized chess game sits in front of an art installation called 'Fish,' by Los Angeles-based Christian Moeller, at the Calgary Central Library. 'Fish' is composed of more than 10,000 books in 12 colors.Melanie Stetson Freeman/StaffCalgary’s new public library is intended to get quieter as one ascends. In fact it’s only on the top floor, in the wood-paneled “TD Great Reading Room,” that the space begins to resemble the kind of spot more typically associated with a library.

This fact irks some locals. “I like the building. I don’t think it has enough books in it,” gripes Darryl Green, a retired plumber who visits thrice weekly. “I find it noisy. Libraries, we didn’t talk in them, and they were all real quiet. But that’s not what happens now. Now we have forgone that just to get people in the doors. So you have people doing drumming downstairs and stuff like that. It’s not really what a library is.”

On this point, Calgary is certainly not alone. Libraries across the globe, from Finland to Qatar, are becoming tourist attractions in their own right. Calgary’s new library propelled the city to The New York Times’ annual “52 Places to Go” list for 2019. And Time magazine included it in its “World’s 100 Greatest Places of 2019” edition. During its opening days last November, more than 52,000 visited, and since then the number has grown to 1.2 million (although that’s still just a bit less than the number during 10 days of the Calgary Stampede this July).

It’s also become a de facto service center, open to the homeless or those addicted to drugs. “That role has been forced on them because other social services are dwindling,” says Professor Van Herk, a bibliophile who makes a point of visiting a library in every new place she goes and who has lost count of her tally. “But they have picked up that task with so much generosity.”

Its very presence, connecting the once-ailing East Village to downtown with an archway, is a statement, where city hall famously “turned its back” on the neighborhood with a solid wall.

Two homeless friends, who don’t wish to share their names, are reading magazines on a recent afternoon. They come daily. They were regulars at the old library too, but here they sit at the “prow,” in a living-room setting looking out on their city. It can get stuffy, says one. They agree with Mr. Green that it can be loud. But when asked to use one word to describe what this place means, one replies “openness.” The other says “welcome.”