The Nature of Remarkable People - An Analysis of Frederick Douglass

by Leo Zimmer from San Diego, California in United States

“There was an idea to bring together a group of remarkable people, see if they could become something more.”(The Avengers). Remarkable people, the likes of which have never been seen in the world before. Remarkability is the most known and most beloved idea of a hero, those who do things we ourselves can never hope to achieve. Perhaps the one and only trait that everyone longs for, heroism, is a mark of an admirable person, someone who can be looked to for answers and guidance in times of need. It is someone who can always be looked to as a moral North Star, a beacon of light. A hero, by definition, is someone to look up to, in which they are the figureheads of civilization, the very identity of a group of people. They show our beliefs and ideas in a person who society looks up to. We as a society are always finding real people to look up to, people which inspire us, and these are our heroes. The people who drive a society as a whole, giving a role model for them to look up to. A hero is someone who exemplifies traits that all people strive for, the parts of humanity which we strive for. In this day and age, a true and admiral hero must portray acts of compassion and courage for the benefit of those around them. 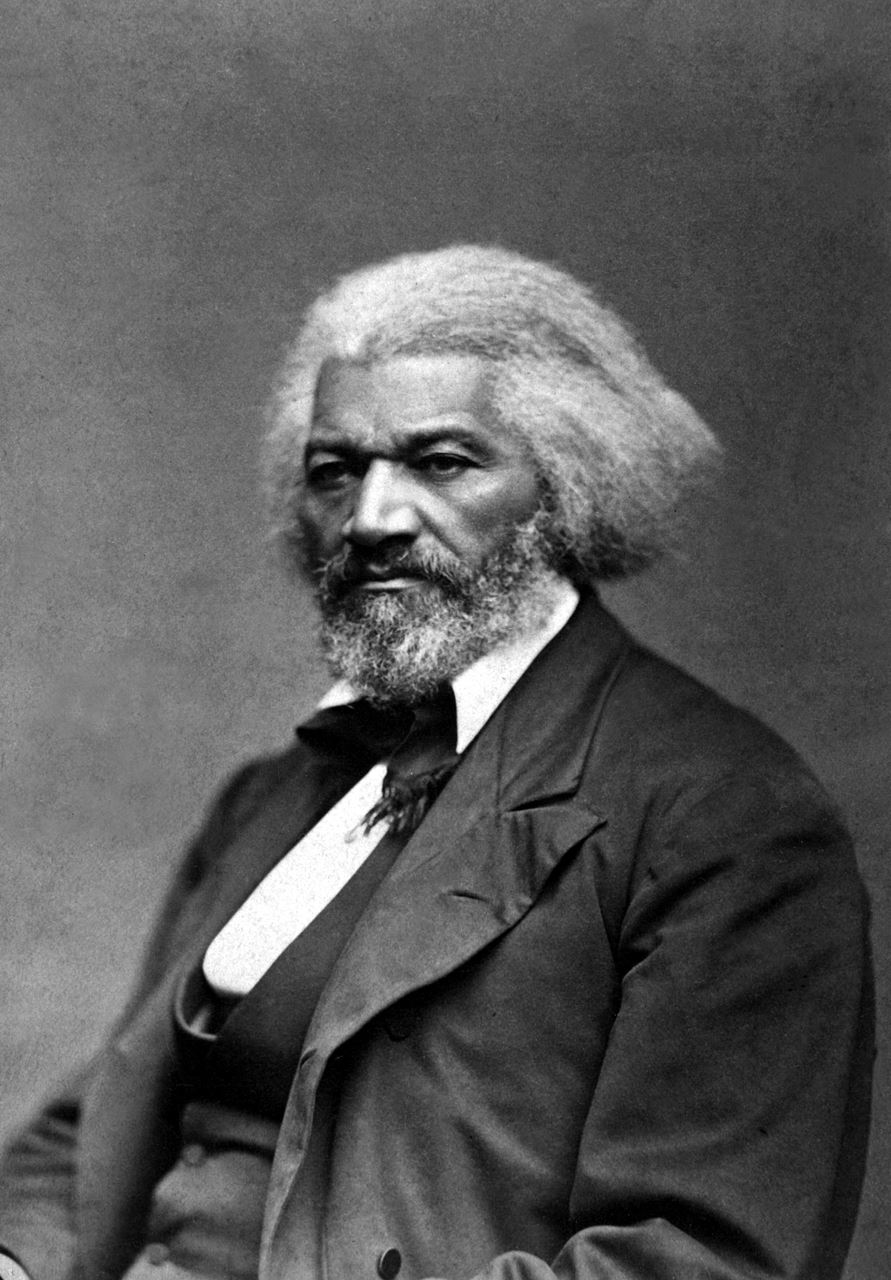 The Lion of Anacostiahttps://en.wikipedia.org/wiki/Frederick_Douglass
One unique individual, The Lion of Anacostia, Frederick Douglass, exemplifies the traits of compassion, and courage. While his birth date is unknown, he was thought to have been born in the year 1818 into slavery in the U.S. and claimed February 14 as his birthday, as his mother had referred to him as “Her Valentine” when he was a boy. Additionally, he grew up under multiple owners and as he aged, he learned to read and write from his kind-hearted mistress, Lucretia Auld. On September 3, 1838, he escaped the South disguised as a sailor and officially changed his name to Frederick Douglass. Later that year he would marry his first wife, Anna Murray. Douglass then settled down for a while to write his first autobiography, “Narrative Life of Frederick Douglass, an American Slave” in 1845. In 1847 Douglass purchased his freedom with the help of abolitionists in Europe. He later went on to speak at the women’s rights convention, Seneca Falls as the only present African American. Douglass then wrote “My Bondage and My Freedom” in 1855, elaborating on his first autobiography, and finally, in 1881, wrote “The Life and Times of Frederick Douglass.” Douglass would continue voicing his opinions through his speeches and writing until his death on February 20, 1895. Compassion is a building block of civilization, as humanity cannot exist unless we care for one another. Showing compassion is an essential to a truly good human, as compassion is what all admiration has at its core. Courage as well is something that a role model cannot be without. Without the courage to stand up for yourself, for your beliefs, and for the wellbeing of others, you will not be. Throughout his life, Douglass used his skills to the best of his abilities to benefit all people he interacted with, in an attempt to build a completely racism and prejudice-free future, and in the process showed rare true heroism.

Douglass showed his compassion towards his contemporaries, trying his hardest to help as many oppressed individuals as he could. Douglass’ compassion was shown in all parts of his life, as he always strove to help as many people as he could: “Douglass would become a major speaker at most of the Women's Rights conventions held during the next 21 years, partially in gratitude for “women's agency, devotion, and efficiency in pleading the cause of the slave…”(Kester-Shelton). Douglass would, after the trials he and the other slaves faced, go on to help with another cause which dealt with the suppression of rights: the Women's Suffrage Movement. He saw in the case of women's rights a similar kind of suppression of rights that he and the other former slaves had in their lives and realized that they too would need equal to fully achieve their rights. Douglass was able to understand that he and “his people” were not the only one being oppressed in the American society, and as such he devoted his resources, not only to help improve the lives of slaves, but also that of women and other discriminated groups. Douglass has been seen to show this compassion for people other than his fellow slaves, but he also reveals it towards his fellow free Africans. During the Civil War, many African American soldiers joined the war and were subsequently treated as unequal to their white counterparts, and Douglass was willing to speak out against this too: “Early in August 1863, Douglass met with Lincoln, pressing upon the president equal pay for black troops, equal consideration in prisoner exchanges, retaliation for the murder of captured black soldiers, protection from inhuman treatment, and the opportunity to receive military commissions”(Commire). Douglass sees that the African American troops being used for the same war as their fellow white troops are being greatly mistreated, and took action against it. Even in the northern states, where slaves are free men, he understands that heavy racism and discrimination still occur, showing how he is still striving for equality even though he is already free. Staying true to his character, Douglass shows a level of compassion most other would not. He proves his drive for equality extends to all people, not just himself and those he cares for because he is showing a great deal of concern for people who he may not have ever met. However, he realizes both that they are being oppressed and is actively pushing for total equality, and that he can use his status to help them. By the end of his life, Douglass’ compassion was nearly undeniable. No matter what happened, he was always doing his best and trying his hardest to achieve total equality for all people in America, no matter who they were. 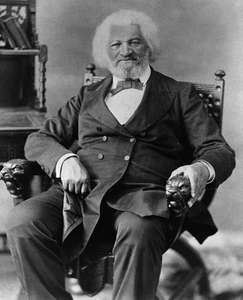 Douglass in his older agehttps://www.britannica.com/biography/Frederick-Douglass
Throughout his life, Frederick Douglass conveys immense courage by risking himself and his reputation in order to benefit those around him, as when he announced his friend William Lloyd Garrison. “In 1851, however, Douglass broke with Garrison. In May, Garrison's American Anti-Slavery Society had passed a resolution aimed directly at Douglass. It forbade any member to support any newspaper that did not explicitly condemn the U.S. Constitution as a pro-slavery document”(Commire). Douglass, despite agreeing with his cause, saw faults in Garrison’s beliefs and decided to break ties with him. Almost all of Douglass success can be linked back to Garrison because the early recognition Garrison gave him helped him establish himself as a skilled orator. Douglass owes his success to this man, but when he begins to institute regulations among his organization that Douglass firmly disagrees with, he is more than prepared to put his foot down. Even though Douglass owes him so much, and despite the harsh judgment he may receive from other abolitionists, he is willing to stand for what he believes in, hoping that others will come to see the same faults in the system that he does. In this day and age, courage is often misinterpreted to be only fighting some great threat or putting oneself in immediate physical danger, but Douglass was able to show his courage in very different ways: “By 1844 Douglass had decided to put these doubts to rest; he set down on paper The Narrative of the Life of Frederick Douglass, an American Slave, which was published the following year; ten years later he would revise and expand his narrative as My Bondage and My Freedom, including a greater discussion of his childhood and family members” (Kester-Shelton). Douglass has, in the eyes of the law, no rights, yet despite this, he still decides to publish the retelling of his story because he knows that it is something the people in the north need to see. Douglass was still an escaped slave when he published this book, so by doing so he opened up the door for his old master to send slave catchers after him, or for those around him to capture and return him to the plantations. Despite the enormous risk involved with publishing his book, Douglass did so anyway because he understood that it had to be done. Never before had first-hand accounts of the horrid treatment of slaves been documented in such a way, and the book represented a huge turning point where the northern white men began to realize the injustices that the slaves had to deal with. Douglass was able to show his courage through all aspects of his life, and benefited greatly from it, having the courage to publish a book that could have gotten him killed.

Throughout his life, Douglass used his compassion and courage in order to help as many people as he could become free from the bindings of racism and prejudice. Douglass’ compassion and courage shone throughout all of his actions. He helped whoever he could, whenever he could, as long as he believed his efforts were for the good of other people. He showed courage in the face of a brutal slavery system, whereas he was willing to risk his life and, more importantly to him, his freedom in order to do things that would end up helping the abolitionist cause in great ways. Douglass’ skill in writing and speaking were used in combination with his compassion to create works that drew sympathy for the slave's cause, and his courage made sure that he continued on with them, no matter the risks. His courage and compassion, along with the rest of his character, roll together into a truly good person, who only wants to see as many people as possible affected positively. He always strove to be kind and caring for others, and in today's world which is filled with so much hatred, it would do the world a great service for people to think of others first. For them to go out of their way to help each other in however many small ways they could. Douglass is a powerful motivation both to myself and others because of the way in which he used his talents. He could have easily used his freedom to live his own life, away from the system he had learned to despise, but instead, he stood up against it. He applied what he had learned to help those who had been oppressed, and he inspires me to always stand up for what I think is right. It might be easier to not, it might be more convenient for me to not, but Douglass has shown me that for change to happen, you need to make it happen. Remarkable people, those who exceed our expectations in every way imaginable, exist to inspire us and to lead us. But most of all, they can be all of us. Douglass did not have access to any tools to help him that would be exclusive to him; his reading and writing skill came originally from his mistress who owned many other slaves, and most of it was self-taught. What he had was a drive and willpower to make his dreams become a reality. Douglass’ story shows an ordinary human being becoming something more, something remarkable, and that is something we can all learn from.