With less traffic and a need for outside activity, people are biking more, bringing a shift to city planning and climate change.

MAY 15, 2020 - You’ve heard of shortages of meat, toilet paper, and hand sanitizer? Add bicycles to the list. Retailers are reporting that bikes are rolling out their doors at an unprecedented clip. 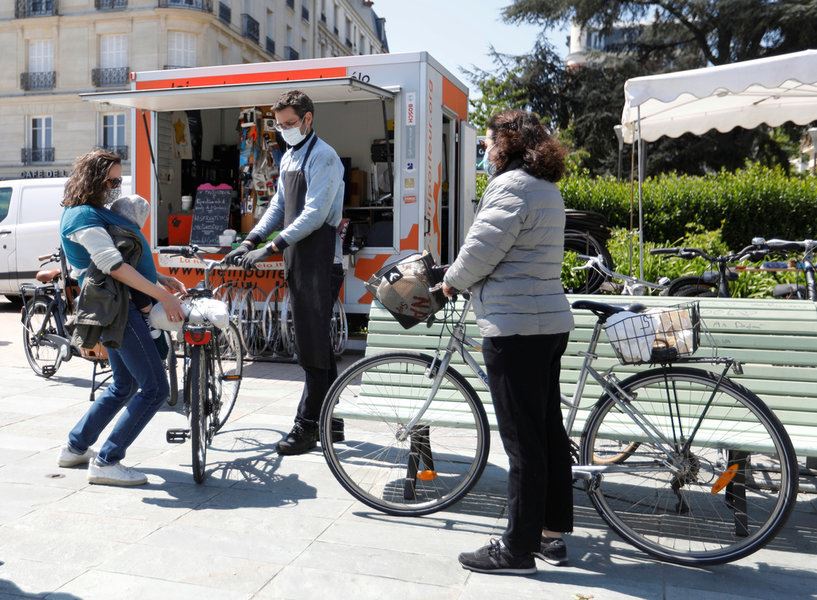 “Every $400 bike in the universe has been sold,” a manager at Landry’s Bicycles in Boston says. The co-owner of McCully Bicycle and Sporting Goods in Honolulu, Hawaii, seems to agree. “We have never sold this many bikes so fast.”

Part of the shortage is because of trade difficulties between the United States and China, a major producer of bicycles. But the pandemic is a factor too. As weather in the Northern Hemisphere warms, and lockdowns of various types wear on, people are looking to get outside and to exercise. And with motor vehicle traffic way down, more people with bikes are willing to take to roads usually dominated by cars and trucks.The boost in bike riding could be one change that will endure beyond the coronavirus. Cities are planning more accommodations for cyclists, especially if commuters hesitate to squeeze back onto buses and trains. As more people give biking a try, many don’t want to turn back, especially with the ease of the new electric bicycles.

London is expecting a tenfold increase in bike traffic. The British government has announced $2.5 billion in spending to encourage cycling and walking, including giving out vouchers to pay for bike repairs.

Rome is planning more than 90 miles of new bike lanes while Paris is creating about 400 miles.  What’s more, France is offering every citizen $55 toward bike repairs.

Budapest is installing bike lanes on major streets. Oakland, California, has closed off 10% of its streets for bike use. And so on.

Some merchants are concerned that less car traffic or fewer parking spaces will reduce business. But one new study from Oregon’s Portland State University shows the opposite: Bike lanes actually bring more customers to city streets, especially to retail shops such as food vendors. Along car-free streets in a half-dozen American cities, both employment and sales have grown.

City dwellers may welcome more bikes and fewer cars after enjoying the cleaner air of the past couple of months. In Europe, air pollution from nitrogen dioxide and particulates has fallen dramatically.

Get the Monitor Stories you care about delivered to your inbox.

Much still needs to be done to make sure biking is a safe activity. Yet the economic, health, and environmental benefits are even more appealing than before this crisis. As Janette Sadik-Kahn, former transportation commissioner of New York City, put it to the BBC: “The pandemic challenges us, but it also offers a once-in-a-lifetime chance to change course and repair the damage from a century of car-focused streets.”

It may be time to dust off that old bike, pump up the tires, and join the mass of pedal-pushers.