Those who learn differently may bring important perspectives and insights to the table. Carla Curran is working to ensure that visually impaired students have an opportunity to make contributions in the scientific realm.

DECEMBER 2, 2019 - WATERTOWN, MASS. - During a classroom visit at the Perkins School for the Blind here in Watertown, Carla Curran shares 3D models of microscopic phytoplankton, 5,000 times their original size, with a lively group of teenagers. 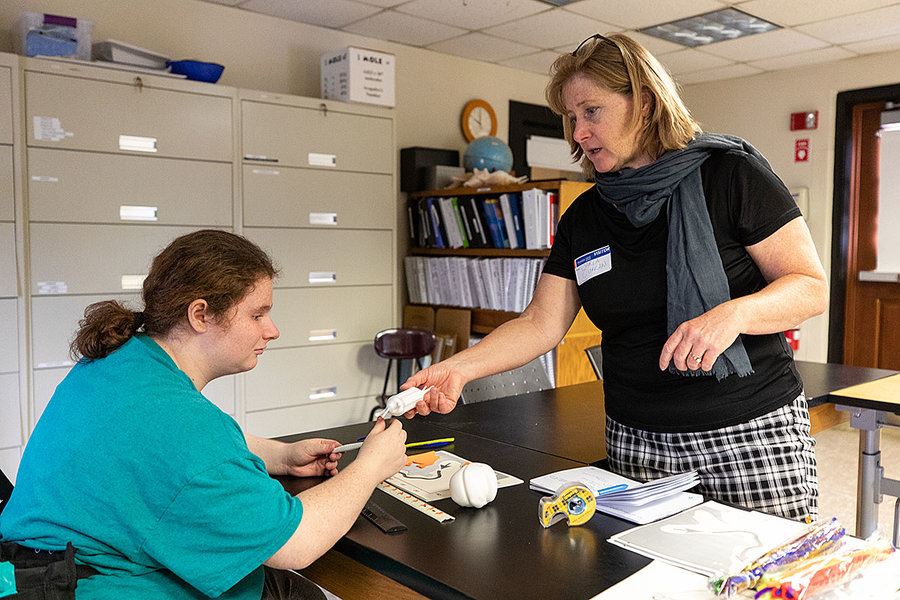 “Did you know that the tiniest organism can influence an entire food web?” she says.

The students consider this as they run their hands over the grooves and crevices of the small white models, learning the parts of a dinoflagellate Alexandrium cyst, which creates harmful algae blooms. Dr. Curran asks the teens to describe what they feel.

“Like a mouth that never opens,” says one student, smiling.

The observations lead to conversations about how the ocean affects people, from the availability of seafood to the government’s role in preserving healthy ecosystems.

For more than 22 years, Dr. Curran has taught hundreds of undergraduate and graduate students, most recently as a professor in marine science at Savannah State University in Georgia. But over the past six years, her role as a regular guest educator at Perkins has led to her most influential work.

She has engaged more than 100 Perkins students in multisensory exercises designed to make difficult scientific concepts more interactive and accessible. It’s an approach aimed at boosting inclusivity and retention among students when it comes to STEM (science, technology, engineering, and math) subjects.

“Carla’s work definitely has had a positive influence on our students,” says Kate Fraser, a longtime science teacher in the secondary program at Perkins. “I’ve seen an increased interest in science by all [Perkins] students ... hoping to find jobs after high school in science-related fields ... and [I] know of former students who went on to college and now work in technology-related fields.”

Ms. Fraser considers this a “win ... as there is still hesitancy by employers to hire persons with disabilities.”

About 70% of working-age adults in the United States who are completely or partially blind do not have full-time employment, reports the National Federation of the Blind. There’s a significant lack of representation in STEM-related fields.

For Izzy Primeau, a recent Perkins graduate, the gradual loss of her peripheral vision hasn’t stopped her from pursuing a career in science, thanks in part to Dr. Curran’s teaching methods. Ms. Primeau recently won the Young Conservationist Award from Zoo New England and is now studying animal care at Becker College in Leicester, Massachusetts. She credits Dr. Curran’s activities with building her confidence and knowledge.

“Learning science through other senses means you don’t have to rely solely on vision,” she says. “It helps you remember and understand concepts better if you can feel models and build graphs.”

In a review of educational practices conducted by Stanford University, one highlight was a study from New York, which found that the “hands on aspect [of environmental education] is an equalizer [for K-12] students with a variety of learning styles and learning abilities.” In that study, students who engaged in hands-on activities demonstrated higher achievement levels.

An invitation, then inspiration

Dr. Curran became involved with Perkins after an invitation from a colleague to participate in a project focused on science accessibility for visually impaired people. Working with Perkins students furthered her interest in taking a more inclusive and creative approach to teaching.

“Their desire to learn and engage me when I presented the science, despite numerous obstacles and often a lack of technology, is deeply inspiring,” says Dr. Curran, who visits Perkins several times during the academic year. “I continue to learn so much from them.”

Her passion for fostering diversity and inclusivity stems from her own experiences facing discrimination as a woman in science.

“During my entire university experience, I only had two female science professors,” she says. “People would occasionally make dumb blonde jokes or comments like, ‘That’s a pretty good idea for a girl.’ These are things I don’t want my students to experience.”

Her work is motivated by a fierce desire to inspire and encourage young people “to stay in science. ... I saw how hard students struggled with reading graphs and tables because a lot of the technology that translates this information doesn’t do so effectively,” she says.

Dr. Curran’s innovative approach extends beyond the classroom. Working in tandem with the Woods Hole Oceanographic Institution and Amy Bower, a physical oceanographer who is visually impaired, she facilitates whale watching and trawling trips out of Gloucester as part of a Perkins outreach program. Students help dredge up ocean creatures, such as sea urchins and crabs, which they observe through touch in a seawater-filled tank and then carefully release back into the sea.

The students also participate in activities involving “sonification,” which translates data points into sound instead of visual graphs. Listening to the audio recordings of numerical charts, they detect patterns in fluctuating fish populations, ocean currents, and seasonal effects.

Perkins students are well positioned for such studies. “You can’t see very far underwater,” Dr. Curran notes. Instead, she says, “Science uses sound to study the ocean. Through sonification, Perkins students can hear the data speak. Some didn’t know this was an option.”

She also points out that students “heard things that I didn’t hear.”

Such educational opportunities are also deeply valuable to Dr. Bower. “As a visually impaired scientist myself, I know how quickly blind students can be left out altogether in school science labs,” she says. The kinds of sensory experiences offered by these ocean expeditions “bring science alive for all students, sighted or not.”

A life-changing lesson on whales

Isabella Scott, another recent Perkins graduate, says her Woods Hole experience was life-changing, since she “didn’t really think about pursuing a career in science as a possibility before meeting Dr. Curran.”

Now a biology major at Curry College in Milton, Massachusetts, Ms. Scott recalls a fateful boat trip involving a lesson on whales. After placing an underwater microphone into the ocean, Ms. Scott and her peers could hear only ship engines. Dr. Curran explained that the whales’ ability to hear each other – which is how they communicate and hunt together – was negatively affected by the noise of human activity.

“Being on a boat and doing this activity reminded me of just how important it is to become a scientist and help animals,” Ms. Scott says. “Everyone should experience science the way Dr. Curran taught us.”

In the past year, Dr. Curran has traveled to the Florida School for the Deaf and the Blind multiple times, presenting her multisensory activities in science classes. She also led a marsh expedition for 30 visually impaired eighth and ninth graders.

“Just because people have different ways of learning doesn’t mean they aren’t hungry to learn,” says Dr. Curran, who notes, “My teaching at the university level now incorporates these sensory-based activities. Students from all backgrounds enjoy using 3D models and learning through touch and sound.”

“Diversity in science benefits everyone,” Dr. Curran says. “Including people who think differently will actually accelerate the process of coming up with solutions to serious concerns like climate change. We must bring them to the table first.”

Find more stories of Teacher Heroes at MY HERO