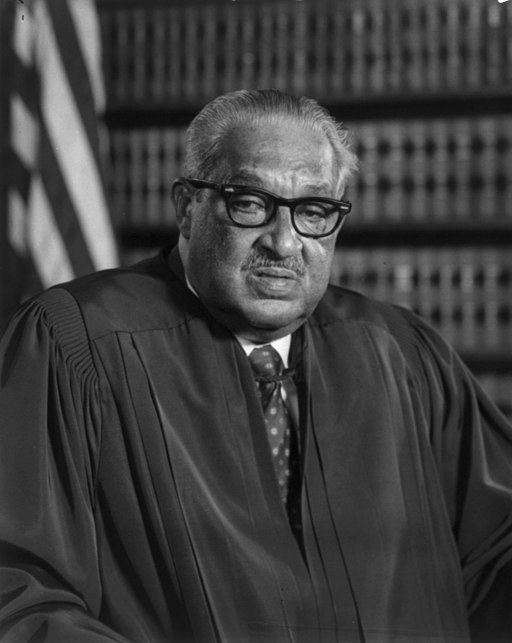 Supreme Court Justice Thurgood Marshall[Public domain], via Wikimedia CommonsMy all-time hero is Thurgood Marshall because of his perseverance, bravery, and sense of justice. A prominent figure in the civil rights movement was a lawyer who went by the name Thurgood Marshall. Thurgood Marshall was born on July 2, 1908 in the city of Baltimore. As a child, Thurgood was a very careless and jaunty kid. Thurgood didn’t care about getting in trouble and always slacked off. However, after receiving the punishment of memorizing the whole U.S. Constitution, he realized what he truly wanted to do. He wanted to become a lawyer and help gain equal rights between the whites and blacks. He enrolled in Howard Law School and soon after graduation worked for the NAACP, an organization which fought for African Americans who were falsely accused of crimes. As Thurgood became more well known, he argued 32 cases to the Supreme Court and won 29 of them. His ability as a lawyer was recognized by President Lyndon B. Johnson, and he was appointed as the first African American Supreme Court Justice. Thurgood was appointed for a lifetime term to the Supreme Court, but only served for 24 years due to sickness. Thurgood Marshall’s accomplishments are very important to the U.S. because without him, it would have taken much longer to abolish segregation.

During Thurgood Marshall’s life, he showed an immense amount of perseverance and determination. In his early life, Thurgood faced lots of prejudice. Thurgood was rejected acceptance into Maryland Law School because he was black. However, Thurgood did not let the obstacle get in his way, he worked even harder and gained acceptance into Howard Law School, which was basically the Black Princeton. Thurgood also showed perseverance in the fight against racism. As a black lawyer, Thurgood faced a lot of racism and threats, however he pushed through and gained the position of the first African-American Supreme Court Justice. Another way Thurgood Marshall showed his perseverance was through his cases. One of Thurgood’s most notable cases was the “Brown v. Board of Education.” He fought for the desegregation of schools and, through his perseverance, won.

Thurgood Marshall did not only show perseverance, but he also showed a sense of justice. Thurgood had strictly fought cases where innocent African-Americans were charged with crimes because of their race. An example of his righteous beliefs was shown in the Eleanor Strubing case which was popularized through the movie “Marshall.” In the case, he fought for the innocent Black who was charged falsely. Another example of Thurgood’s sense of justice is how he fought for the rights of all people; he didn’t care about gender or race. He never held any biases against anybody, even the whites who had discriminated against him since he was young.

Thurgood showed a lot of bravery throughout his life. As a black lawyer, Thurgood had received many death notes and threats.  People would go to far lengths to injure or kill him. The movie “Marshall” described how Thurgood had always slept in clothes so that if rednecks came to raid his house, he’d be able to escape quickly. Even though Thurgood knew about these risks, he still continued to do what he thought was right. Thurgood showed a lot of bravery when he took the lead to fight for Black rights. Thurgood took the position knowing of the scary hardships he could encounter, like murder attempts, death notes, threats, and even torture. Yet, he was ready to sacrifice himself for the sake of his people by using the power of the law to overcome segregation.

In conclusion, Thurgood Marshall played an important role in the Black acquisition of rights. Thurgood’s unending perseverance, bravery, and judicious mindset were one of the biggest aides to the equality of people within America. If Thurgood had never been born, America may have turned out differently than what it is today. Thurgood helped desegregate schools, allowing black children to go to school with white children. The fact that being without Thurgood Marshall may have changed the future drastically is what powers me to think of him as my hero. Thurgood Marshall had done so much for the black community by fighting for what he believed in. I admire Thurgood Marshall because he challenged the boundaries created by prejudice, and successfully won. I can especially relate this to myself as an Indian in America because of the ongoing prejudice towards people from Southern Asia. Thurgood is a great person, and I admire him for his deeds.

Thurgood Marshall - MY HERO story by staff
About Thurgood Marshall - The Marshall Project is a nonpartisan, nonprofit news organization that seeks to create and sustain a sense of national urgency about the U.S. criminal justice system. We achieve this through award-winning journalism, partnerships with other news outlets and public forums. In all of our work we strive to educate and enlarge the audience of people who care about the state of criminal justice.

Rothman, Lily. What to Know About the Real Case That Inspired the Movie Marshall. [Online] Available http://time.com/4972645/marshall-movie-true-story/.2017.

Celebrating the 100th Anniversary of the NAACP