by Pat Keeton and Jeanne Meyers

Sometimes it is extremely dangerous to make a stand for freedom. In some places in the world, freedom of speech is not tolerated. In order for a nation to grow and flourish, free exchange of information is essential. Yet in some countries there is no freedom of speech, and television stations and newspapers are tightly controlled by the officials.

In May of 1989, students in China demonstrated in Tiananmen Square to show their desire for more freedom of speech and information. The official government response to the thousands of students who gathered in Tiananmen Square with hopes for new freedoms in China was very harsh. The students' call for a dialogue for change was answered with tanks and tear gas. Here are the words of a few of the individuals connected with the 1989 gathering at Tiananmen Square:

"Well, the students' demand is very simple. They want to have a dialogue with the leaders of their country. They feel that too often their leaders will not admit to mistakes while they are in office. That's the problem."

Another student said: "Democracy in China must be a process. It cannot be done in just one day."

One photojournalist who bravely covered this historic event commented: "What we just heard on BBC was news we already knew -- that about 1,200 troops charged out of the Party Government Headquarters today, firing tear gas at the students, and that there were clashes between students and soldiers guarding the Great Hall of the People."

The students who had come with hopes of creating more freedom in their society were punished. As one anonymous student said, they were left with "...an angry feeling because we know that our brothers, our sisters, our daughters, our sons, our parents were killed. So we are very angry."

It is a great responsibility for those of us who have the freedom to discuss ideas and debate the many critical issues which confront our world. We must remember how valuable these freedoms are and try to help those individuals who seek the light of liberty, wherever they may be.

Amnesty International - has been involved in fighting for human rights for people all over the world. 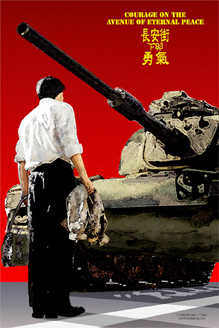