What worlds, known or unknown, would have been made possible had Alan Mathison Turing (1912-1954) not died of cyanide poisoning at the age of 42? For not only was Turing working on advanced problems in biology and physics at the time, he had already contributed his major part to the development of the intelligent computer.

Born in London into a scientifically undistinguished family, Turing was said to have taught himself to write in a short span of only several weeks. After reading, and being inspired by the book Natural Wonders Every Child Should Know Turing gave his life completely to science. Headstrong, eccentric and prone to solitary pursuits, Turing distinguished himself as a brilliant mathematician at King's College Cambridge. Later, at Princeton, he began work on proofs that established the foundation of the British computer.

It was around this time that Turing invented the "Turing Machine": a machine that can automatically compute anything a human can compute within finite time. The Turing Machine was an abstract concept that represented the actions of a computer. This concept entailed the writing of certain precisely defined operations onto a tape of infinite length. As such, the Turing Machine would be an incalculable influence on computability and computers themselves.

One can say that Turing bridged the gap between logic and the physical world, thought and action, computer programs and practical machinery. But it was Turing's secretive work for the British Government during World War II that allowed Turing the opportunity to use his genuis for another cause: the saving of lives. While German U-Boats prowled the North Atlantic sinking British ships, Turing was hard at work in the British cryptanalytic headquarters at Bletchley Park. At Bletchley, Turing designed machines that would help crack the German "Enigma" code. Once the code was broken, the Allies were able to shift the balance of the war in the North Atlantic.

After the war, Turing published "Computing Machinery and Intelligence," a seminal work dealing with Artificial Intelligence and Philosophy. Turing also ventured into the area of morphogenisis - the theory of growth and form in biology. Turing was also exploring a machine's ability to think, as well as the possibility of building intelligent machines.

Turing was not only a brilliant scientist but an accomplished athlete; he once considered entering the Olympics as a cross country runner.

The solitary and nonconformist Turing was arrested for being a homosexual. This led to him being denied the security clearance that allowed him to work in cipher intelligence with the British government. He was tried and punished by a British court in 1952.

Turing met an untimely death. On June 7, 1954, he was found dead. Many labelled the death accidental owing to the fact that Turing kept many poisonous bottles about his house. The coroner deemed Turing's death a suicide. The world will never know for sure. More important is what is known: the fact that Alan Mathison Turing gave science, and the world, the groundwork which made the intelligent computer a thing of reality and infinite wonder. What a truly heroic life!

In THE IMITATION GAME, Benedict Cumberbatch stars as Alan Turing, the genius British mathematician, logician, cryptologist and computer scientist who led the charge to crack the German Enigma Code that helped the Allies win WWII. Turing went on to assist with the development of computers at the University of Manchester after the war, but was prosecuted by the UK government in 1952 for homosexual acts which the country deemed illegal.

The New York Times | "Overlooked No More: Alan Turing, Condemned Code Breaker and Computer Visionary." - His ideas led to early versions of modern computing and helped win World War II. Yet he died as a criminal for his homosexuality
Code Girls: The Women Cryptographers of WWII - While Alan Turing was decrypting Nazi communication across the Atlantic, some eleven thousand women were breaking enemy code in America.
BBC| Alan Turing: Why the tech world's hero should be a household name - by Vint Cerf, one of "the fathers of the Internet."

My hero is: Alan Turing. He invented the fundamental unit of computation, the Turing machine. He showed that there are some things a computer just can't do. He also showed that computers don't need to be complicated. His unexpected result was that a simple device can simulate the most complicated contraption we can think up. He proved that a Universal Turing machine, with a collection of symbols and one infinite tape, could simulate all the computers man can ever create. During WWII he worked to break the German Enigma Codes while suffering under considerable social pressure for being gay.

My hero is: Alan Turing. Alan Turing was an incredible human being. He had the ingenuity and imagination to bridge the gap between the theory of computation as posed by the likes of Godel and the implementation of "computation machines". More importantly, he was brave enough to admit his homosexuality in the 1950s. He committed suicide in 1954(?) possibly due to the constant harrassment by the British government (ooh, we trust him with secrets when we think he's straight, but no way can we trust a gay person). To say his ideas have shaped computer science is an understatement 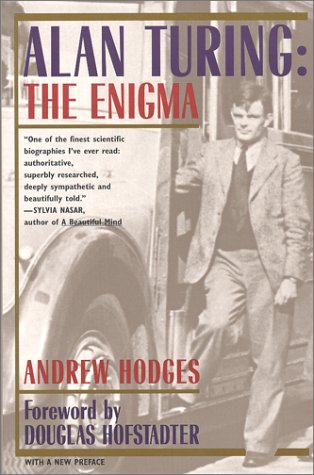