In World War II Britain, my grandmother’s garden was a refuge – as is mine today during the coronavirus pandemic.

MAY 13, 2020 - It was wartime. Death stalked the skies over Britain as my grandmother taught me the names of the flowers in her country garden, a litany of the seasons: bluebells, snowdrops, and aconites in the spring; roses and clematis in summer; dahlias and chrysanthemums in autumn. These were among my first words, and they come back to me now with a resonance no other words can match. 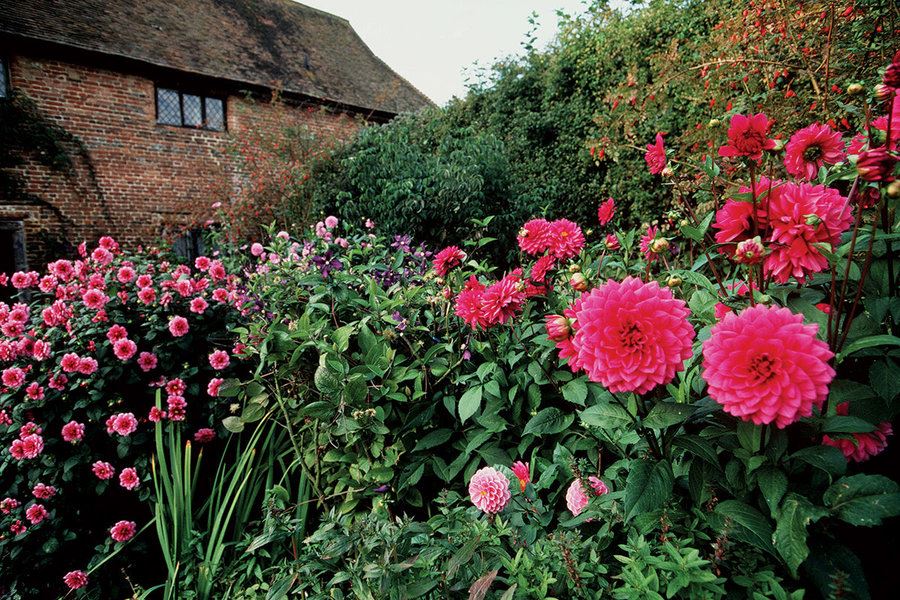 The famous plantings at Sissinghurst Castle Garden were laid out by novelist, poet, and garden designer Vita Sackville-West starting in the 1930s.Melanie Stetson Freeman/Staff

My grandmother was not oblivious to the war. Her beloved son-in-law, my father, was a Royal Air Force pilot; my mother, her only daughter, had come home with me. Grandmother herself was a civil air-raid warden, dashing dangerously around the countryside in an old Austin and wearing a helmet that looked like an upside-down soup plate. She was active in the village chapter of the Women’s Institute, making jam and raising vegetables, and she offered respite to bomb-weary London friends. Every evening brought a hushed gathering at the radio for the BBC’s 6 o’clock news, its solemnity recognized even by a small girl.

My grandmother and the garden are the reason the war years held no terror for me. I remember those days as sunlit and filled with wonderful surprises: the first snow-dusted shoots of spring; the unfolding of a blood-red rose; the way gladiolus flowers opened from the bottom to the top of the stem; dahlias, whose packed petals looked like faces.

I would dig beside her when she planted bulbs in the fall and follow her in spring and summer as she cut flowers for the table or for the rooms of visitors. Often, on warm afternoons, we sat under the rose pergola while I repeated that exotic word, pergola, to make her laugh.

Today, in a dark time and another country, I go out into my garden.

It is no match for my grandmother’s. Mine is a small garden challenged by sandy soil, heat, and humidity. But I feel blessed to have it. Today’s new word is pandemic, a threat that will not affect the rhythms of the garden. Crocuses and early daffodils are up, soon to give way to later varieties, the delicate blue and white stars of puschkinia, to tulips, and then the flowers of early summer. There is promise in the buds on the lilacs, the red-tipped branches of the Japanese maple, shoots on the rose canes, fiddleheads amid the winter-­matted ferns. Each plant has its season, predictable almost to the day.

I know the serviceberry will bloom the week of Shakespeare’s birthday; the leaves of the itea turn a brilliant red-orange in mid-October. Just as a seed holds the plant-to-be within itself, a garden holds the future.

Coming inside, I head for the pile of garden catalogs, and there is solace in full color. I will order “Diane,” the winter flowering witch hazel I have chosen after years of pondering. I can go even further: hellebores that won’t reward me until this time next year.

As the wider world remains closed to me, the garden is, as it must have been for my grandmother through long years of darkness and doubt, a comfort and a hope. I see her still, a tall figure in a white sun hat and long flowery dress, reaching up to clip a rose from the pergola, holding it out for me to smell. A small, protected moment to set against the vast uncertainty of those days.