Volunteers are stepping up to help refugees with free food and lodging. The U.N. said Sunday about 368,000 people have fled Ukraine to neighboring countries. 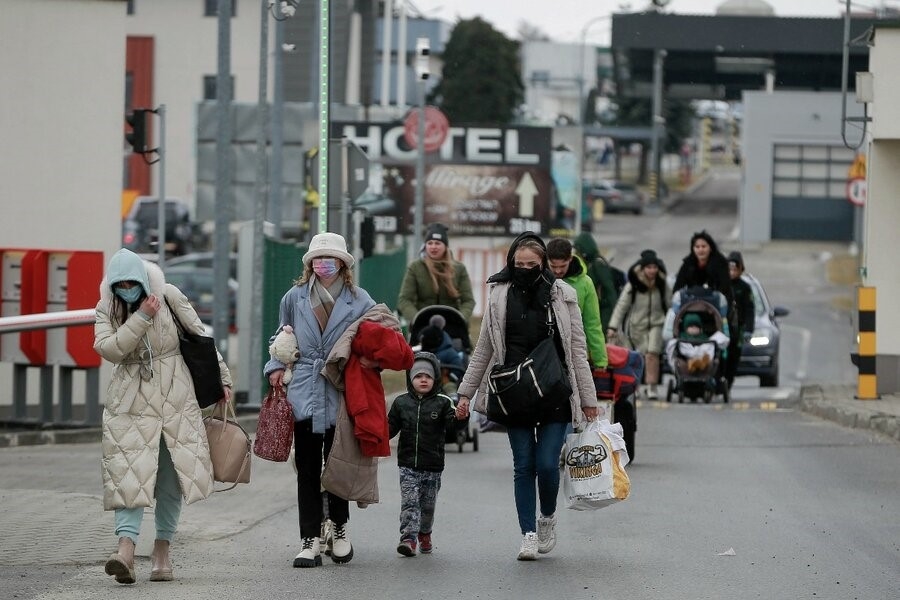 Sitting with her teenage daughter in a hotel foyer in northern Romania, 38-year-old Viktoriya Smishchkyk breaks down in tears as she recounts her departure from Ukraine.

“I could hear the sound of the fighting outside, it was very scary,” Smishchkyk, who is from Vinnitsya in central Ukraine, told The Associated Press from a hotel that is offering free accommodation to refugees.

“We left all our belongings behind, but they are material things — less important than the lives of our children,” she said.

Smishchkyk and her daughter are among hundreds of thousands of people who have fled Ukraine since Russian launched its attack on Thursday. The U.N. refugee agency said Sunday about 368,000 people have fled the country, many into bordering nations like Romania, Poland, Hungary, Moldova, and Slovakia.

Amid the horrors and chaos, volunteers from far and wide are showing support by extending help to those whose lives are being shattered by war.

At Romania’s Siret border crossing, where thousands of Ukrainians have entered, government workers race to distribute basic amenities donated from all across the country. Meanwhile, people and businesses are pooling resources to provide the refugees with everything they need.

Stefan Mandachi, a businessman who lives in Suceava, a city about 50 kilometers (30 miles) south of the Siret border, has converted a large ballroom at the hotel he owns into a refugee reception center and is offering private hotel rooms for free to the displaced.

Scores of mattresses are laid out on the ballroom’s floor, donated clothes are piled high and young children run around.

“I feel the need to help, it’s my duty to help,” said Mandachi, who is also offering free food for Ukrainian refugees from his fast food chain. “I have locals who speak Ukrainian — we are united to help them.”

For Vasiliu Radu, a 34-year-old emergency service worker at the Siret border, the outpouring of support from volunteers has made him proud of his fellow citizens. “It’s more important these days, in these situations of war and instability — that people must help each other,” Radu said.

But not everyone trying to flee Ukraine is receiving the help they need.

Some Indian citizens seeking to flee into Poland were stuck at the border Sunday and were unable to cross, according to Ruchir Kataria, an Indian volunteer in Poland who is trying to help them.

Kataria, who has been in cell phone contact with Indians stuck at the border crossing into Medyka, and a smaller group at Poland's Krakowiec border, told the AP that the Indians trying to cross at Medyka were told in broken English: “Go to Romania.”

But the group had already made long journeys on foot to the border, not eating for three days, and had no way to reach the border with Romania which is hundreds of kilometers away.

In Poland’s southeast city of Przemysl, just a few kilometers from a border crossing with Ukraine, hundreds of people waited in a parking lot to help refugees who were being bussed in from the border by authorities.

“I am very happy that I have come and I want to thank all the people who are organizing this,” a young Ukrainian girl, who had just arrived, said. “This feels really nice that people are waiting for us in your country.”

Moldova, which shares a long border with Ukraine, is also seeing a massive influx of refugees. Authorities said that since Thursday, 70,080 Ukrainian citizens have entered the small nation of about 3.5 million.

“In these difficult days, I am proud of the citizens of our country, who have shown solidarity and humanity and have offered our neighbors a helping hand when needed," Sandu said.

Jacob Sontea, a Nigerian student who was based in Kharkiv in eastern Ukraine, arrived by train at Hungary's border Sunday with his family. Border authorities escorted them into the European Union country, which had until now been notorious for strongly opposing any type of immigration from the Middle East, Asia, and Africa.

“It was becoming chaotic in the city of Kharkiv ... It was dangerous, so we had to leave because this is the only choice we had," he said.

Back at the hotel in Suceava, Smishchkyk tries to catch her breath as she glances tearfully at the ceiling. “They are still there," she said. “Our relatives, brothers, sisters, cousins. It is just very difficult to process.”