The civic unity of Ukrainians may inspire countries like Taiwan, South Korea, and Iraq in resisting dictators nearby.

Ukraine’s example for other bullied democracies

by the Monitor's Editorial Board from United States 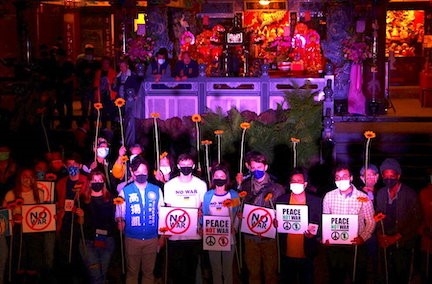 Ukrainian and Taiwanese people attend an event to pray for the end of the war in Ukraine at a temple in Taipei, Taiwan, March 3.Reuters

To some security experts, Russia’s invasion of Ukraine marks a new era of aggression by authoritarian rulers, especially against neighboring democracies. Just as noteworthy is how those democracies are responding.

Take the heroic resistance of Ukrainians. Their inspiring defense of their young democracy may help “empower [other] populations to speak up in dissent from such authoritarian efforts,” Avril Haines, director of U.S. national intelligence, told Congress this week.

In three democracies long threatened by bullying neighbors – South Korea, Taiwan, and Iraq – the invasion has been closely watched to see how much Ukrainians unite around a shared identity based on civic values. Also closely eyed is support of Ukraine by the United States and Europe. That Western resolve, says CIA Director William Burns, helps demonstrate “the resilience of democracies at a time when there’s been lots of speculation about them not being so strong.”

In South Korea, which has enjoyed a thriving democracy for more than three decades, a presidential election took place March 9 amid renewed ballistic missile launches by North Korea. During the campaign, candidate Yoon Suk-yeol cited Ukraine’s strength against Russia and the need for South Koreans to do the same with North Korea. Mr. Yoon won the election.

In Iraq, an election last October resulted in a victory for a coalition of three parties across religious and ethnic lines – and all in opposition to Iran’s support of violent militias inside Iraq. The coalition leader, Shiite cleric Moqtada al-Sadr, promises a “national majority government,” a signal to Shiite-dominated Iran not to meddle in its neighbor. Mr. Sadr is still struggling to form a government.

For Taiwan, the Russian invasion sparked a renewed commitment to its democracy as an underlying defense against threats by China to take the island nation by force. “The determination of Ukrainians has moved the world, making Taiwanese feel the same,” said President Tsai Ing-wen.

As democracy took root in Taiwan during the 1990s, its citizens began to create a national identity separate from the mainland. More than 60% of the island’s 23 million people identify as solely Taiwanese, based on a 2021 poll. China has attempted to “weaken confidence” in Taiwan’s elected leaders, says Ms. Haines. In 2014, however, student protests in Taiwan, known as the Sunflower revolution, further cemented democracy and led to a distancing of trade ties with China.

What’s at stake in Ukraine, says the CIA’s Mr. Burns, is “an incredibly important rule in international order that big countries don’t get to swallow up small countries just because they can.” The example of Ukrainians defending their democracy may just help other democracies keep that rule in place.