by By Ned Temko Correspondent from London 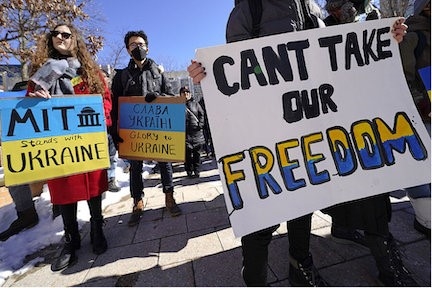 Demonstrators clutch placards at a rally in support of Ukraine, Feb. 28, 2022, at the Massachusetts Institute of Technology in Cambridge, Mass. MIT has severed ties with a research university it helped establish in Russia, citing the country's "unacceptable" invasion of Ukraine. Charles Krupa, AP

The wanton force being hurled by Russian President Vladimir Putin against Ukraine is not just a deepening humanitarian tragedy, nor even just a security challenge that is uniting most of the world in opposition and outrage.

It is also proving to be a civics lesson on a grand scale, because the message ringing out from the words and deeds of Ukrainian President Volodymyr Zelenskyy, his army, and millions of his countrymen and women is that democracy matters.

And what’s more, that it is worth fighting – even dying – for.

It’s a message with especial resonance at a time when many democracies worldwide have been weakened by internal divisions, an eroding readiness to compromise, a waning commitment to core institutions of representative government, and the increasing appeal of populist discourse.

In recent days, however, all that has been overshadowed by a passionately renewed commitment to democracy among leaders across Western Europe.

At least for now, this sense of democratic purpose seems to have persuaded politicians that hot-button issues like pandemic restrictions, immigration, even fuel prices and inflation, are trivial by comparison.

It is unclear whether this shift will endure in Europe. But an even more important question may be how this democratic “teachable moment” is received in the major powers with most at stake geopolitically in the Ukraine crisis: the United States, and Russia itself.

Europe’s leaders have been explicit about how deeply Ukraine’s determination to fight has affected them, nowhere more so than at a special session this week of the European Parliament. President Zelenskyy addressed the meeting by video link even as the Russian invasion force intensified its bombardment of his capital.

The Parliament’s president, Roberta Metsola, thanked him for “showing the world what it means to stand up” for democracy. “Thank you for reminding us about the dangers of complacency.” 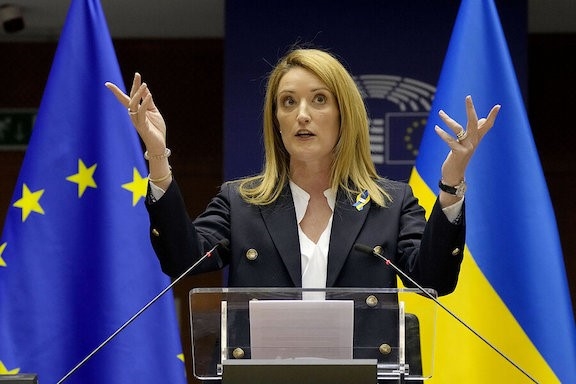 Virginia Mayo/APEuropean Parliament President Roberta Metsola addresses a session on Ukraine at the European Parliament in Brussels, March 1, 2022. At the session, she thanked Ukrainian President Volodymyr Zelenskyy for “showing the world what it means to stand up” for democracy.

She added that the heroism of ordinary Ukrainians had reminded the world that “our way of life is worth defending.”

Acknowledging that the unprecedented sanctions Europe had adopted against Russia would hit European pocketbooks as well, she declared: “Yes, protecting our liberty comes at a price. But this is a defining moment. And this is a cost we are willing to pay. Because freedom is priceless.

The united voice with which European political leaders have echoed this message may partly reflect their countries’ memories of living withoutdemocracy – either under Nazi occupation during World War II in countries like France, Belgium, and the Netherlands; under postwar dictatorships in Spain and Portugal; or among the countries closest to Ukraine, under Soviet control.

But the effect has been clear. A Canada-style “freedom convoy” descended on Paris and attempted to drive on to Brussels in the days before Russia’s attack on Ukraine. Now, the initiative appears to have fizzled. That’s not because the participants feel any less strongly that COVID-19 restrictions have been an affront to personal liberties. Rather, in the current European political climate, with hourly images of Ukrainians under bombardment, they seem to recognize that a renewed protest would be seen as self-indulgently discordant.

But will Europe’s political change of heart spread more widely?

In America, at least so far, the broader democratic message in Ukraine’s resistance seems to have had less impact.

President Joe Biden’s State of the Union address this week did highlight rare bipartisan agreement in support of Ukrainians, and in opposition to Mr. Putin’s invasion.

When he turned to domestic matters, however, Republican lawmakers’ response suggested that the divisions that have marked U.S. politics so deeply are not likely to give way to the kind of newfound unity seen in Europe.

Another possible sign of the difference between the post-Ukraine atmospheres in Europe and Washington: Bipartisan U.S. support for Ukrainians doesn’t seem to have caused any significant move among Republicans toward supporting investigations into the Jan. 6, 2021, assault on the U.S. Capitol – the nearest thing modern-day America has experienced to an overt threat to its democracy.

In Russia, where nearly all power is vested in Mr. Putin, the long-term effects of Ukraine’s democracy message are even harder to gauge.

There has been a surge of small-scale protests against the war, as well as individual shows of support for its victims, sometimes simply by wearing articles of clothing in the blue-and-yellow colors of Ukraine. That’s no small thing, given the ever-tighter controls on dissent in Russia.

Various leading figures in Russia’s arts, culture, and sports communities have also called for an end to the war, some of them in social media posts boasting a Ukrainian flag.

But the key question – for Mr. Putin’s future, and thus for Kyiv’s future as well – is whether Ukrainians’ suffering amid intensifying attacks, and their determination to join the “family of democracies” in Europe, will be felt as strongly in the East, among ordinary Russians, as it has been in the West.