by The Monitor's Editorial Board from United States 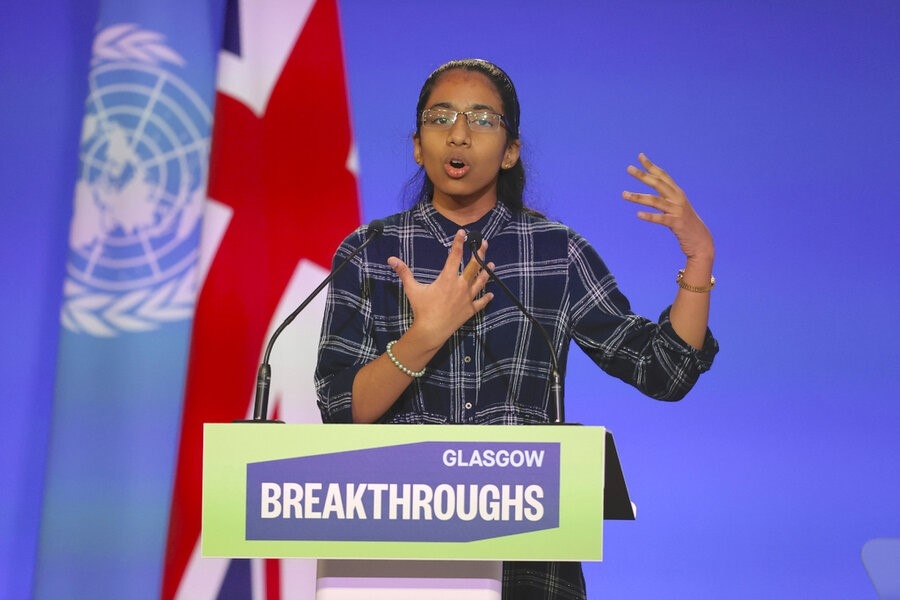 Of all the speakers so far at this month’s climate summit in Scotland, one has drawn an enthusiastic standing ovation. It was 15-year-old Vinisha Umashankar who told the crowd:

“I’ve no time for anger. I want to act. I’m not just a girl from India. ... I’m a student, innovator, environmentalist, and entrepreneur but most importantly, an optimist.”

She was invited to speak because she was a finalist in a global contest aimed at turning back doomism about climate change by finding individuals who have invented the best market-ready solutions to repair the planet.

Vinisha’s invention was a solar-powered iron that could be used by the 10 million street vendors in India who now steam-press people’s clothes with irons heated by air-polluting charcoal. She was 14 when she came up with the idea. She was also the youngest contestant for the first Earthshot Prize and one of the 15 finalists.

Vinisha says that all of the winners and finalists for the prize “chose not to complain” about climate change. Rather the contestants’ inventions show “the greatest challenge in the history of our Earth is also the greatest opportunity. We lead the greatest wave of innovation humanity has ever known.”

The Earthshot Prize, named after President Kennedy’s “Moonshot” space program of the 1960s, was set up last year by Prince William, the Duke of Cambridge and second in line to the British throne. The contest drew 750 nominations from 86 countries. The first five prizes, announced last month, came with a $1.37 million award and access to participating companies eager to invest in new eco-solutions.

The future king says the prize’s purpose is to highlight ingenuity around environmental problems in order to prevent “a real risk that people would switch off, that they would feel so despondent, so fearful and so powerless.” In the spirit of including everyone in dealing with climate change, he wants to show that anyone has the potential to discover solutions.

This fits with a new study by researchers at Rand Corp. that looked at the results of another innovation-spurring prize. Between 1996 and 2019, the Lemelson Foundation and the Massachusetts Institute of Technology awarded an annual $500,000 prize to 26 young inventors. Their innovations led to the startup of more than 140 companies.

The economist who led the study, Benjamin Miller, drew this conclusion: “If you want to maximize the benefits to society, you need everybody to have a chance to be the best inventor they can be. There’s a whole pool of people we’re missing out on because they’re not being engaged.”

Or as Paul Romer, winner of the 2018 Nobel Memorial Prize in Economic Sciences, once wrote: “Every generation has underestimated the potential for finding new ... ideas.”

The audience clapping for Vinisha’s speech probably admired her certainty about finding fresh solutions for a difficult challenge. “You are never too young to make a difference,” she said. Nor too old or cynical to keep on trying.