by Lydia Roeder from Germantown, Tennessee in United States 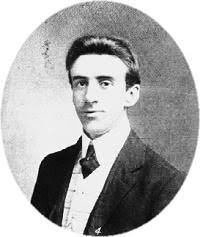 William Harley https://en.wikipedia.org/wiki/Wallace_Hartley One of my biggest heroes who I am inspired by every day is not someone you would expect. His name is Wallace Hartley and he was a violinist on the ship Titanic. Many who have seen the iconic film version of Titanic will notice him towards the end of the movie where he and his musical group continue to play despite the ship slowly sinking into the Arctic water in the North Atlantic Ocean. The reason behind him being one of my heroes is because of two reasons, the movie and music. As long as I could remember I have always watched the movie Titanic with my family and friends. It is one of my all time favorite movies and growing up I would always wonder why the musicians did not try to save themselves when the ship hit the iceberg. Later on, I began playing the flute and becoming heavily involved in music and became more fascinated with this scenario. It turns out the reason behind him and his fellow musicians continuing to play was because he believed the music would prevent panic and create a calm environment. This is his back story.

Wallace Hartley was from a small town of Colne in Lancashire, England. He was introduced to music through his father who was the choirmaster at the Methodist Church who also was responsible for showing him the song "Nearer, My God, to Thee" which was the last song Wallace would play on the Titanic. Later on in life, his family moved to Huddersfield and he joined the Huddersfield Philharmonic Orchestra. Once he knew music was his passion and hopeful career, he left home and joined the municipal orchestra in Bridlington, where he stayed for six years. Finally, he moved to Dewsbury, West Yorkshire in 1909 and joined the Cunard Line as a musician and had the ability to play on significant ships such as RMS Lucania, RMS Lusitania, and the RMS Mauritania.

While he was on the RMS Mauritania, all musicians who were under Cunard were moved to a new music agency of C.W. and F.N. Black, which supplied musicians to other ships companies such as Cunary and the White Star Line. Once this transferred happened, Hartley was no longer a crew member, but instead just a passenger who had access to second class accommodations. In April 1912, Hartley was assigned to be the concert master for the White Star Line ship known as the RMS Titanic. While he was hesitant at first for joining Titanic because he had recently proposed to Maria Robinson, he decided that it would be an exciting opportunity he could not miss.

Before the crash on the RMS Titanic he did not show many outstanding forms of heroism or courage, he showed his true colors on April 15, 1912. As the Titanic  began to sink, instead of using his privilege of being seen as a passenger and trying to escape, he instead played cheerful music with his fellow colleagues. While none of the musicians survived the crash, many eye-witnesses who were on the Titanic remember the band who uplifted them through their music. One survivor stated that he had seen Hartley and his band standing on the boat deck, near the entrance of the grand staircase, near the base of the second funnel, playing their last tunes. This same witness also claimed to have seen three of them wash away while the other five held on to the railing on top of the Grand Staircase stating, "Gentlemen, I bid you farewell."

What is interesting in this unusual act of heroism is that to friends and family, he seemed to know that this ship would sink and had a plan. In an interview with Ellwand Moody who had worked closely with Hartley, he stated that Hartley had already accepted his fate before arriving on the ship, "I remember one day I asked him what he would do if he were ever on a sinking ship and he replied, 'I don't think I would do better than play Oh God Our Help in Ages Past' or 'Nearer, My God, to Thee.'" It has been confirmed by many witnesses that the last songs he played were indeed those pieces, leaving us to believe that was his version of goodbye. He believed that these songs would help prevent panic and create calm as his main concern was never himself, but rather strangers.

Later on, a newspaper reported, "the part played by the orchestra on board the Titanic in her last dreadful moments will rank among the noblest in the annals of heroism at sea." After this newspaper, the Orchestral Association organized a memorial concert at the Royal Albert Hall in honor of not only Wallace Hartley, but all those musicians who took their life to try and create a calmness in others. Five hundred musicians from around the world attended this event, and for the rest of history he will go down as one of the bravest and most courageous people to board the Titanic. That is why he is one of my heroes because he used his music to convey a deeper meaning and try to illustrate a sense of hope in a time of tragedy.

What made the Titanic band keep playing, even as ship sank? - Gives an in depth details on the Hartley from his early life to his final performance.
Wallace Hartley - Gives the life story of Wallace Hartley
The Heroic Musicians Of The Titanic - Gives details about Hartley
Encyclopedia Titanica - Authenticating the Wallace Hartley Titanic Violin