“When you're curious, you find lots of interesting things to do.”  -Walt Disney

My Hero Walt Disney by Scarlett

“When you're curious, you find lots of interesting things to do.” Web PageScarlettWhy did I choose Walt Disney? I chose Walt Disney because Mickey Mouse was invented by him in 1928, and I used to watch Mickey Mouse all the time. It's my favorite character.  This book is a biography book. ¨Who was Walt Disney” by Whitney Stewart. This book is 106 pages long. This book covers from when he was born to when he died. This book was made in 2009. What are some interesting facts about the author, Whitney Stewart? She was born in 1959, in Boston. Some of her hobbies are; reading, traveling, taking long runs, yoga, and doing some meditation now and then. She graduated in 1983, Brown University. Her career is writing children's books and a freelance editor. She formerly worked as a travel agent. She is now happily living at 62 years old. 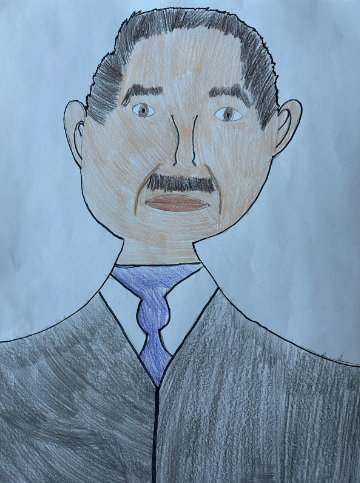 Portrait Picture ScarlettWalt Disney was born December 5, 1901. 1249 Tripp Avenue in Chicago Hermosa neighborhood. He was also the fourth son of Elias Disney‍. Walt Disney, moved with his family to a farm in Marceline Missouri. when he was four. Walt really loved living on the farm. It was the best life for him. He lived with his three older brothers Herbert, Raymond, and Roy and his younger sister Ruth. In Marceline, Walt first had a love for drawing and art, he was very good at it! His father was also very strict and he was religious and sometimes would abuse his children. He was working as a building contractor, when Walter was born. His mother on the other hand was a very sweet woman with high hopes for Walt. Some of his siblings are, his brother Roy, he was a decent brother, and he was serious about business. His other brother Herbert, was born on December 8 1888. He was also a good brother to Walt and often picked on him,  like any older brother would do. And then Raymond. born December 30 1890.  And then his sister, was born on December 6, 1903. Her middle name Flora, was named after her mother Flora. Walt Disney went to McKinley High School. He took drawing and photography classes, and he was a contributing cartoonist for the school paper. When Walt was 16, he dropped out of school to join the Army. But he was rejected for being underage. Walt had a strong interest in trains and art. He would draw trains all the time. And he would take art classes. and would sometimes trade his art for free haircuts! What are some interesting stories or facts that happened to Walt Disney? His family moved to Kansas City later after moving to Marceline Missouri where Disney got a love for trains. In 1934 Walt had the idea of Snow White and the Seven Dwarfs!  His influence was Winsor McCay. He was a great man who was a huge influence on Walt. Walt's dream was to open an amusement park {Disneyland}, because he felt like it was time for something big, new and brilliant. He would often take his daughters, Diane and Sharon, to outings and meetings at Disneyland. I personally would love to go there someday! Walt always wanted to be an artist, but when he got older he was not so good at drawing so he created a team and then created Walt Disney Studios. Before that it was called the Disney Brothers Cartoon Studios. He didn't really know what he wanted to do, so only some things foreshadowed what would happen, like having love for art, to help animate his cartoons 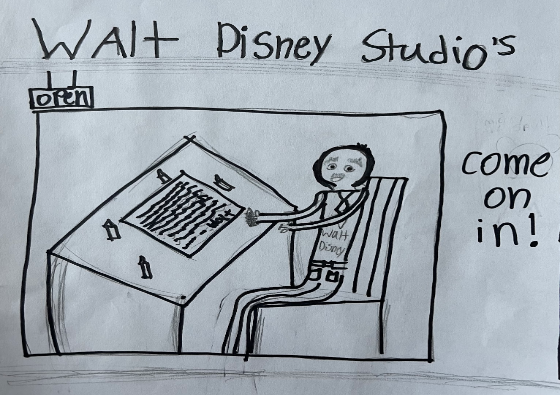 Action PictureScarlettA challenge Walt faced, is when he made the cartoon character Oswald the Lucky Rabbit. It was taken over by other companies and Walt had to go out of business. But then he made cartoon characters Mickey Mouse, Donald Duck and others. He also had a problem with bankruptcy, He had his fair share of success and failures. Walt never gave up no matter what happened to his life, and business. He was a strong outgoing man. He always had a way to get over the bad. I really like Walt Disney for his ways of never giving up, and yes he did get stressed a lot. Like a normal person running a business would do. His brother Roy (became the manager), Ub Iwerks and Ham Hamilton (animators) were the people who helped Walt with his success. The influence they had on Walt was giving him a contradiction, and giving him advice and helping run the studio was influencing and helping Walt.  I love Walt Disney because he was generous. He was always giving and sharing! He was caring. Because he would try to make so many people happy and make their day. He was kind. Because he would never be rude as a child, but as he grew older he did grow a little temper as we all do. He was creative. Because he always would draw and make molds out of his imagination, All of those things make him so much more than he really is.  Deep down we all feel like we can't make it, so did Walt but he pushed through and believed in himself. Just know that you can do it, it just won't be easy. What are some funny things that happened in Walt's life? When he moved to Marceline, Missouri, it was a great adventure in his life. With pigs and horses on a farm, he never wanted to leave. What are some sad things that happened? When he was little he had a hard time moving a lot. It was a sad time for Walt, he never wanted to leave any place, But yet he always had to.  He never forgot about Marceline Missouri, it was a great experience! Especially on a farm. What are some awards Walt Disney has gotten? Walt has received  a lot of awards but here are three, he got an Academy Award for best short film animated. He got a Presidential Medal of Freedom Award. And a Grammy Trustees Award. And much much more!

What surprised me about Walt Disney, is that he never gave up. He would always get something taken away from him and still would not stop, no matter what would happen. The questions I would ask Walt are: What was it like being the boss of a company, was it hard, challenging, stressful? Was your family a big help in the business? What was the best part of making Mickey mouse? I would rather not be Walt´s child because I feel like my family owning a business would be so busy. For example: no one would be home all the time, and I would not have time to play with Walt or my mom if they were my family. I loved the book I read about Walt Disney's life because it told me all the little details in his life. And most importantly gave me all the fun facts! I learned from the book I read that Walt has 3 brothers and one sister. I also thought he was an only child. Another thing is where he was born and grew up. Some things that would apply to my life is when Walt gets upset or stressed or mad, he would sometimes take some alone time to himself, and clear his mind. I think others would love to read this book because it tells you all the main events and main lessons in life and it also tells a lot of details. I love that I chose Walt Disney to learn about because he reminded me of when I was little, and would watch Mickey Mouse and read books about Mickey all the time (he was my favorite character). I don't think Walt would be a hero because he never really did anything to save,inspire people. He would always just do his own thing and take his own path and give his own advice.