by Sean Colbert from San Diego, California in United States 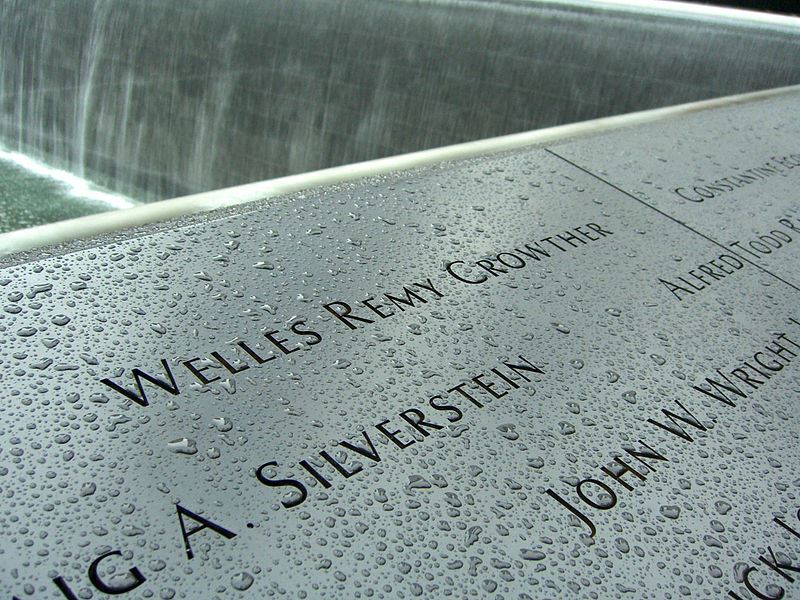 Welles Crowthers Memorial Nightscream [Public domain]Imagine yourself high up on a skyscraper that is on fire and with heavy black smoke all around you. People are scared, panicked and running around fearing for their lives and looking for exits. Now, imagine being in that situation, but being calm, cool and knowing what to do. One hero during the September 11, 2001 attack that fit that description was a man named Welles Crowther. Welles Crowther was born in a town called Nyack, New York, with his two younger sisters and his parents. It had been said, that Welles always wanted to be a firefighter so, in his mid-teens, he became a volunteer junior firefighter at the local firehouse. When he turned 18, he became a full member of the Empire Hook and Ladder Company. After high school graduation, he attended and graduated from Boston College. As his work career started, he joined a company that had its offices on the 104th floor of the South tower (“Welles' Story”). On 9/11, Welles displayed two characteristics of a hero: bravery and selflessness. No one could have predicted what was going to happen on that day and how it affected so many lives. During this historic and tragic moment in american history, Welles proved himself to be a hero because he reacted as selflessly as anyone can, and put other people's lives before his own.

Welles Crowther demonstrated incredible heroism during and immediately after the attack on the World Trade Center. For example, while Welles was inside the South Tower and started to act and lead people to the a stairwell, “He had searched for a fire extinguisher. He used it to put out some blazes” (Kilgannon,”Red Bandana”). Welles showed his bravery when he would willingly get close to the flames in order to continue leading people, who were unable to find their way, to the stairway, saving most, if not all, of their lives. After a few days of the attack, "Crowther's remains are found near those of firefighters and emergency workers killed at a command center in the lobby of the south tower”(Kilgannon, “Saved on 9/11”). On 9/11 when everyone was running away to save themselves, Welles stayed in the burning building to save as many people as he could before he tragically died. His actions saved lives. This represents how Welles act of bravery leads him to become a deserving hero.

Another reason why Welles is a deserving hero is because of his selflessness to help others. When he was inside the South Tower, “He led a first group to the 61st floor, then pulled his bandanna over his mouth and told them he was going back up to guide down others.” (Hampson). Welles was selfless because he helped many people find the way out before going back into the flames to help more people that were trapped on the upper floors and would continue to repeat the process until time was out. In addition, a survivor named Ling Young stated that “she was steered toward safety by the man; that he called, "This way to the stairs!"; then he followed her down the stairs, carrying a woman on his back; then when they reached clearer air, he put the woman down and went back up the smoky stairs” (Kilgannon, “Saved on 9/11”). In this instance, not only did he help steer them to safety, but he found a fire extinguisher and gave it to Ling so she could keep bringing the group down the stairs in case they encountered any fires. He did not keep the fire extinguisher for himself, he gave it up because he wanted to protect the others around him. These quotes validate Welles selflessness to help the lives of many people.

Welles Crowther, also known as the Man in the Red Bandana, is a hero because of his ability to be brave and selfless during the attack on the World Trade Center, putting other people's lives before his own. In the dedication to the 9/11 museum, President Obama was so inspired by Welles story that he became the centerpiece of Obama's speech where he said, “He led those survivors down the stairs to safety, and carried a women on his shoulders down 17 flights. Then he went back, back up all those flights, then back down again, bringing more wounded to safety, until that moment when the tower fell.” (“Remarks by the President”) While I was researching and read about this speech,  I re-learned the importance of helping others before yourself. Welles story was inspirational to me because I have considered wanting to become a police officer or a firefighter so this opened my eyes on the sacrifices you will need to make. In conclusion, Welles is a hero because of his willingness and fearlessness to face danger in order to save others. He is the epitome of bravery and selflessness.

Kilgannon, Corey. “Saved on 9/11, by the Man in the Red Bandanna.” The New York Times, The

“Remarks by the President at 9/11 Museum Dedication.” National Archives and Records