When the friend who has your back is a horse

Trust and confidence can be elusive for many people. Dream Catchers, a therapeutic horseback riding center, helps those with disabilities make strides in expressing these qualities.

MARCH 2, 2020 - JAMES CITY COUNTY, VA. - Kristie Stokes sits high and proud on the reins as she guides Melody, a 1,000-plus-pound draft horse, around the barn. In her pink helmet, pink sweatshirt, and pink boots, Ms. Stokes follows a course set by her instructor, who offers instructions, and often encouragement, in the center. Melody walks on. Ms. Stokes talks to Melody. 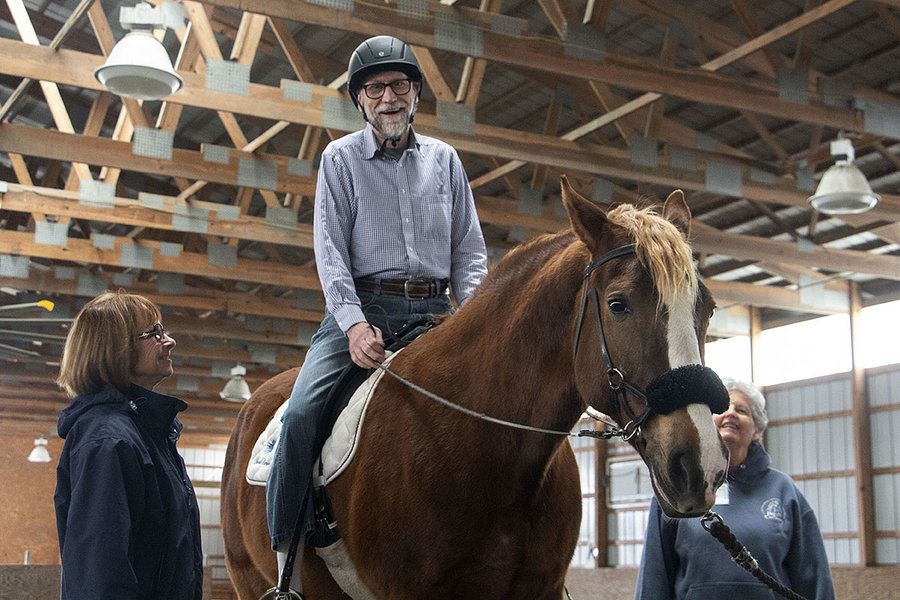 Ms. Stokes, who has special needs, sees Melody each week at Dream Catchers, a therapeutic horseback riding center in Virginia’s James City County. For the last three years, she’s visited the 22-acre ranch for the physical and mental benefits of horsemanship – structured around programs from speech therapy to psychotherapy. Those benefits, experts say, are borne out of a trust between horse and rider, a relationship like the one Ms. Stokes has with Melody.

Nestled into back roads, Dream Catchers is one of a growing number of therapeutic riding centers across the country. Serving more than 800 participants since its founding in 1993, the center has been a respite for many seeking the mix of patience, honesty, and camaraderie that, advocates say, only a horse can provide.

That relationship, says Cher Smith, communications coordinator for the Professional Association of Therapeutic Horsemanship International, can empower, teach, build trust with, and help heal participants – even if their partner is a 1,000-pound animal.

“When you come to that animal with all of your junk, with all of your past issues, with who you are physically, that horse doesn’t care,” says Ms. Smith. “What he cares about is, can I trust you?”

A beginning with nurses

Dream Catchers’ story begins at the Cumberland Children’s Hospital in neighboring New Kent County. A group of nurses who realized the therapeutic value of working with horses started the program. The Cori Sikich Therapeutic Riding Center became its home in 2004, after a family donated the land in memory of its daughter Cori, an avid horsewoman. 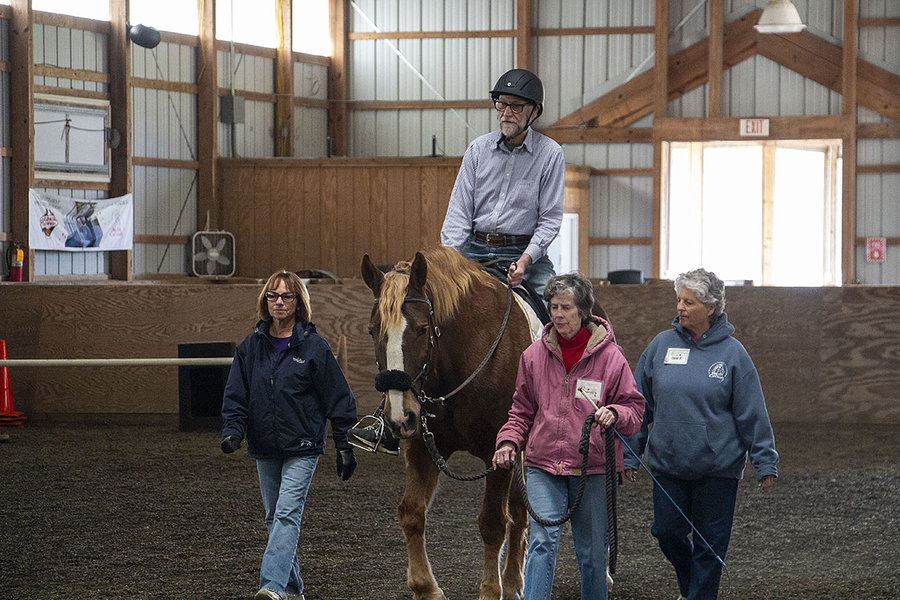 With a team of volunteers, Mark Floyd leads Ranger, a 1,000-plus-pound draft horse, around the barn during a lesson, Feb. 10, 2020. The therapeutic riding center in James City County, Virginia, has 15 horses and two therapy dogs. Around 80 to 100 participants visit each week.Noah Robertson/The Christian Science Monitor

Served by a full staff and small cavalry of almost 300 volunteers, the ranch is a collection of barns, fences, and pastures. Around 80 to 100 participants visit each week, says Executive Director Janet Mayberry.

The program’s 15 horses – and two therapy dogs – all required careful selection, says Ms. Mayberry, for not every horse can be a therapy horse. It takes the right mix of personality and physicality – a blend of patience, sensitivity, and steadiness. There are no stallions on the ranch.

When Rhonda Hamlin, a mental health specialist, works with new clients, she says she first takes them to the pasture and lets them watch. Often, she says, a horse will come near, greeting a participant’s outreached hand near its nose – a “horse handshake.” Somehow, she says, horse and rider choose each other.

Once a rider finds his or her horse, it’s all about growing their relationship.

Courses with cones and poles

During a lesson in early February, Ms. Stokes takes Melody around the barn, weaving through cones and stepping over poles. A trainer guides the riders over a loudspeaker housed in the rafters, while volunteers walk with the riders for safety. Melody responds to Ms. Stokes’ commands of “walk on” or “whoa.” At one point, Ms. Stokes lets go of the reins and waves her arms from side to side above her head.

The courses may look like a simple arrangement of cones and poles, says instructor and barn manager Samantha Bannock, but they’re more than a pony ride. Trainers can quickly adjust based on a rider’s needs – changing the speed, stance on the horse, or maneuvers. Progress isn’t always linear, she says, but instructors can gradually push participants to build their confidence and trust.

“They [horses] can pick up or perceive a person’s feelings or emotions even before the person themselves kind of acknowledges [them],” says Ms. Hamlin. “So in a very rudimentary sense, I can use them as a barometer and know immediately what’s happening with a client just by watching what the horse does.”

Horses are prey animals, which means they’re extremely – even if imperceptibly – sensitive to their environment, she says. That enhanced perception also requires participants to be honest, says Ms. Hamlin. If a rider presents himself or herself one way but is feeling another, the horse will stay away.

Unlike a human, who may hold a grudge, horses remain in the present, says Ms. Hamlin. That quality allows riders to feel accepted more easily by horses than by humans, she says. Whenever participants make a mistake, she reminds them that the horses will always be willing to start over.

“It’s not an easy thing to get up on that horse and ride. It can be terrifying,” says Ms. Mayberry. “So it requires trust in the people that you’re working with and strength of character.”

Karen Stokes says she sees the change in her daughter when they come to the ranch. Kristie smiles more, talks more, and parades around her confidence.

Kristie “engages with the horse. She talks to this horse. They have such a great relationship. She’s in control of the situation,” says Karen Stokes.