Where an ancient Jewish-Muslim coexistence endures

Jewish-Muslim coexistence in the Middle East can seem to be in short supply. But without looking for it, our correspondent found that a shared history and intermingled culture is sustaining that spirit in North Africa.

NOVEMBER 5, 2019 - CASABLANCA, MOROCCO, AND TUNIS, TUNISIA - Even as congregants recite evening prayers at Temple Beth El, the Muslim call to prayer rings out from minarets across the city and into the courtyard, a mix of Arabic and Hebrew filling the dusk sky with praises to God. 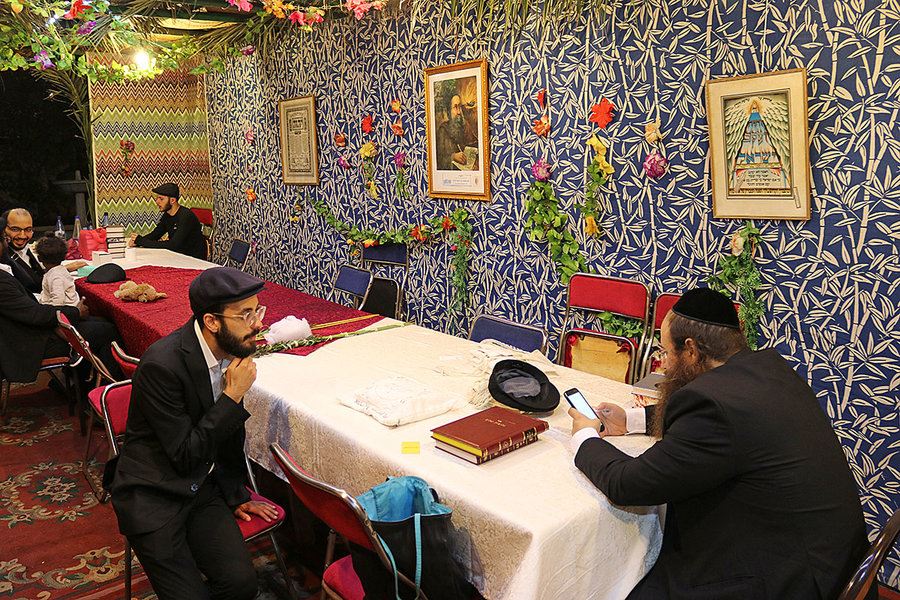 Yeshiva students at Temple Beth El study in a sukkah hut erected outside the synagogue in Casablanca, Morocco, for the Sukkot holiday, October 16, 2019.Taylor Luck

And as the yeshiva students file out of Beth El (literally, House of God), Mohammed, the gatekeeper, kneels down in Muslim prayer at the synagogue’s entrance.

This is not a mirage; this is Casablanca.

After decades of economic migration and geopolitical tensions that reduced North African Jewish communities from hundreds of thousands to a few thousand people, hope is being rekindled in Morocco and Tunisia that as Jews keep the light of their communities alive, so too does the region’s unique model of Muslims and Jews living side by side.

For even in a time of global polarization, Moroccans and Tunisians are proving that historical bonds bind, rather than divide, Jews and Muslims, whose shared past they say paves the way for a shared future.

Jews came to modern-day Morocco, Tunisia, and Algeria some 2,000 years ago, with the largest migration arriving shortly after the destruction of Jerusalem’s Second Temple in 70 CE. 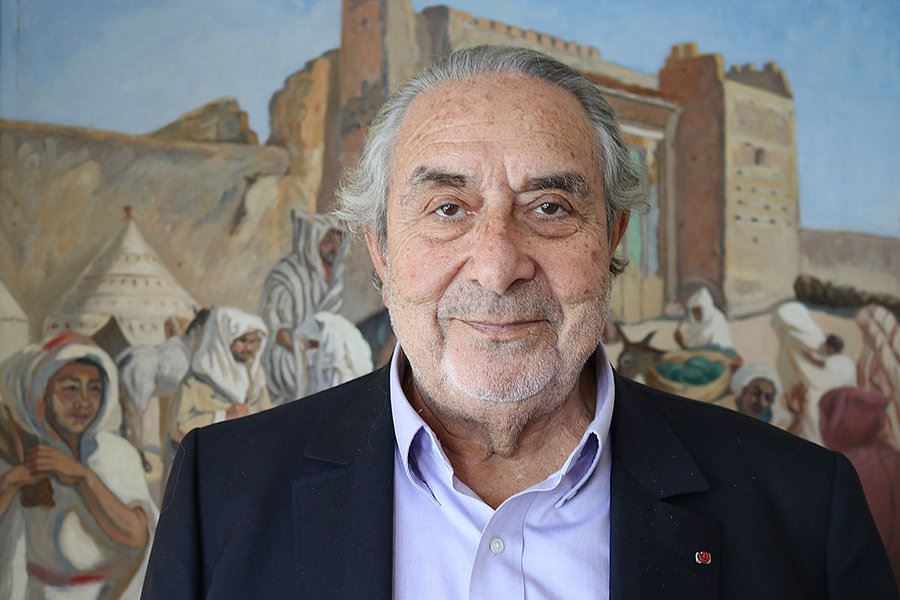 Serge Berdugo, secretary-general of the Council of Jewish Communities of Morocco, at his office in downtown Casablanca, Oct. 16, 2019.Taylor Luck

Moroccans will be quick to tell you that this is not only Jewish heritage, but Moroccan heritage.

“Morocco never cut ties with the diaspora even during the Israeli-Arab wars, because they were a part of us, and when they left, for us Moroccans it was as if part of us had left.”

“A model we need to preserve”

King Mohammed VI has promoted the return of the Moroccan Jewish diaspora and Israeli tourism to the country, funding the preservation and renovation of 162 ancient Jewish cemeteries and several synagogues across the country. Under Moroccan law, anyone with Moroccan Jewish ancestry can claim citizenship.

The preamble to Morocco’s 2011 post-Arab Spring constitution enshrines Moroccan Jews as integral to the national fabric, stating that Morocco “is a sovereign Muslim state … whose unity is nourished and enriched by its African, Andalusian, Jewish, and Mediterranean constituents.”

Casablanca, where many Jews across the country have migrated in recent years, has emerged as the de facto capital and epicenter of modern Jewish life in Morocco. 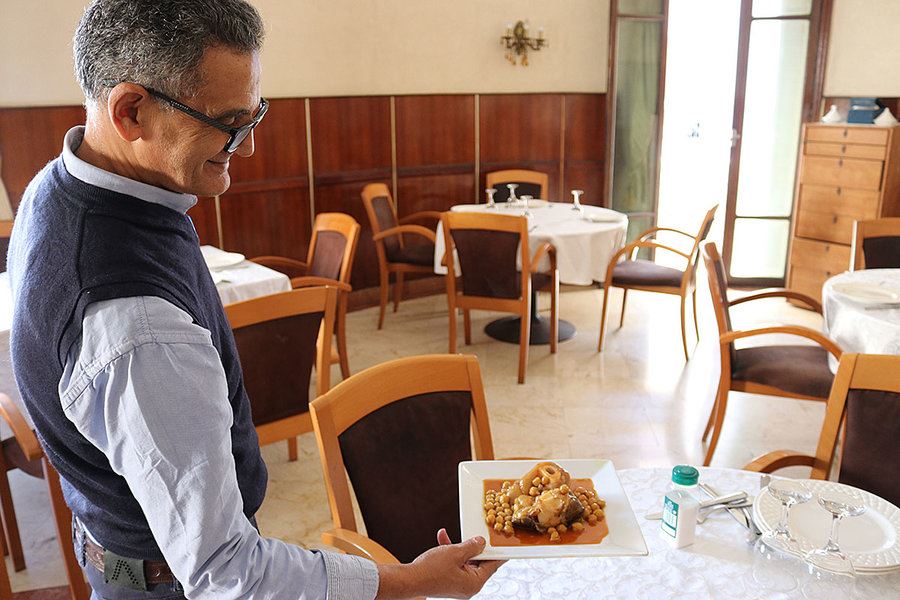 “Visiting Arabs and Israelis see the atmosphere in the streets, signs in Hebrew, Jewish and Muslim families living together in the same apartment building, and they can hardly believe it,” says Serge Berdugo, secretary-general of the Council of Jewish Communities of Morocco and a community leader.

“But the fact is, it is not a slogan or some dream, it is daily life for us, and that is a model we need to preserve for the world.”

“We are always looking for ways to keep our community vibrant,” he says.

Dating back to the Punic era, and having constructed what is believed to be the oldest synagogue in Africa, Tunisian Jews once numbered more than 100,000, but now number around 2,000.

While the island of Djerba grabs headlines and tourists for its large Jewish community, Jews are very much part of the pulse and lifeblood of Tunis.

On the streets of the bustling capital, passers-by will point you to the kosher restaurant in the port of La Goullette, the Jewish nursing home, the towering national synagogue, or the historic synagogues marked by menorahs carved into their wooden doors.

The demand for kosher meat – seen as even more meticulously prepared than by Islamically halal butchers in the capital – is high among Tunisian Muslims as well as Jews.

On a rainy Friday this October, men and women lined up at the kosher butchery of Amran Fennech, the store name in Hebrew and Arabic, red spicy merguez sausage hanging from the storefront.

Ask anyone in central Tunis; hands down, Amran has the best cuts in town.

“He always gets the best beef and lamb,” says Rehab, as she walks away with 2 pounds of beef ribs.

Although the number of Jewish customers has dwindled, Mr. Fennech says Muslim clientele and the return of the Tunisian Jewish diaspora in the summer keep him busy; he also prepares tuna for export across Europe.

“We are Jews and we are Tunisians – we have specific cuisine, a specific dress, and a specific way of life – you can’t separate one from the other,” Mr. Fennech says as he pulls out a beef carcass from his iron fridge.

Historians say the high-water mark of Jewish-Muslim relations may have been over a millenium ago at the time of Al-Andalus, or Islamic Iberia, when the Muslim empire stretched across the Mediterranean to modern-day southern Spain.

Jews and Muslims had become an intertwined community that was a beacon of science, philosophy, art, and enlightenment while much of Europe was in the Dark Ages. They flourished as the leading scientists and writers: philosopher Moses ben Maimon (Maimonides), diplomat and physician Abu Yusuf ibn Shaprut, poet Moses ibn Izra.

“Al-Andalus was a model for interfaith harmony and coexistence that we can still learn from today,” says historian Habib Kazdaghli, dean at the University of Tunis-Manouba and an expert on religious minorities in Tunisia.

When Europeans reconquered southern Spain, Jews and Muslims fled together back to North Africa, forming their own distinct “Andalusian” neighborhoods in towns and villages in modern-day Morocco and Tunisia, distinguished from their fellow countrymen who had never left Africa.

For Tunisia’s Jews, communal tensions arose in the second half of the 20th century amid regional crises and the birth of Israel.

Arab nationalism and anger over wars with Israel stoked occasional outbursts of vandalism against Jewish properties and stores in Tunis. Violence erupted during the 1967 and 1973 Arab-Israeli wars, and the 1991 Gulf War.

“Every time there was a war in the region, tensions would increase and certain people would direct their anger toward their Jewish neighbors,” says one 50-year-old Jewish resident, preferring not to speak in the name of the community.

But in the 21st century, particularly after the 2011 revolution, Jewish Tunisians say they have noticed a marked difference.

With Tunisian political freedoms, Israel – and by extension Jews – are no longer the main contentious issue or used as a misdirection by an autocratic regime to steer attention away from its abuses at home.

Tunisian Jews say they are back to being neighbors and fellow citizens.

“At the time of the revolution, there were bigger issues than the Jewish community and the question of Israel; the troublemakers left us alone,” says Mr. Fennech, the butcher. “Now we are all living in a new Tunisia together.”

Such sentiment was on display at a cafe in downtown Tunis Oct. 23, as dozens sipped their morning espresso watching the swearing-in ceremony of recently elected President Kais Saied.

As the television cameras cut away to focus on the front-row dignitaries, Tunisian Rabbi Haim Bittan sitting next to Grand Mufti of Tunis Othman Battikh and Archbishop of the Tunis Archdiocese Ilario Antoniazzi, some cheered.

“See that? We have a rabbi, alongside an imam, alongside a priest because they all represent Tunis,” said cafe-goer Mohamed Ben Hassine, pointing at the screen.

“We are a democratic state that chooses to embrace and respect all of our components of society, not divide them.”

Tourism Minister René Trabelsi serves as the only Jewish minister in the Arab world, and the first in Tunisia since the 1950s.

Many Tunisians credit Mr. Trabelsi with successfully turning around Tunisia’s tourism – which once accounted for over 20% of gross domestic product – after being hit with years of instability and ISIS attacks.

“What is important is that I am the right man for the job of state minister, who happens to be Jewish. I am not a quota; this is voluntary and from the people,” Mr. Trabelsi says from his office, flipping through Sukkot holiday text greetings in Hebrew from his Muslim friends and colleagues.

“But the fact that the Tunisian people chose an Arab Jewish minister to lead a critical ministry is a message to the world that we are a country of harmony and acceptance.”

The main factor shrinking the Moroccan and Tunisian communities – migration of young men and women to Europe and Israel for better economic opportunities – continues unabated.

The communities are aging, and renewed campaigns to rekindle interest in their ancestral homelands have yet to lead to significant returns of Moroccan or Tunisian Jews.

Officially there are no diplomatic relations between Morocco and Israel, forcing Israeli visitors to receive visas in a third-party country such as Spain. Israeli tourists to Tunisia must fly to the island of Djerba; there are no direct flights to Tunis.

But Israeli and European Jewish tourism to Morocco and Tunisia is on the rise; as is the demand for kosher foods and Jewish religious tourism experiences.

Locals hope visitors come away with a lesson as well.