Who gets to save the world? ‘Ms. Marvel’ debuts Muslim superhero. 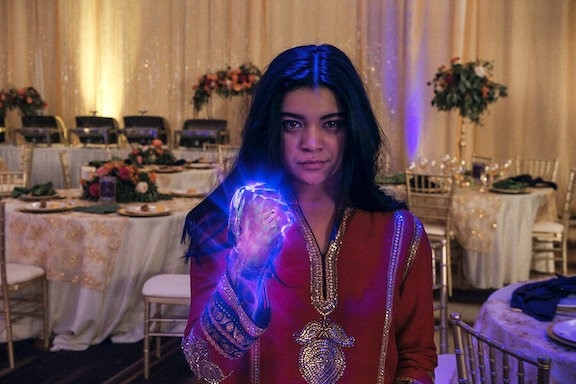 Iman Vellani stars as Kamala Khan and her superhero alter ego in “Ms. Marvel,” debuting June 8 on Disney+. Growing up, Ms. Vellani was a fan of the comic books that the TV series is based on.Courtesy of Marvel Studios

Kamala Khan is a New Jersey high school student whose traditional, Pakistan-born parents worry that she doesn’t have a direction in life. Kamala is, however, passionate about one hobby: She’s a fangirl of The Avengers – especially Captain Marvel. One day, while furtively attending a comic book convention dressed as her idol, Kamala gains powers that transform her into a real superhero.

The lead actor in “Ms. Marvel,” Iman Vellani, has a backstory that’s as meta as that of the origin story that unfolds on screen. Growing up, Ms. Vellani was an ardent fan of the “Ms. Marvel” comic books that the TV series is based on. She only auditioned for the role because, as she told The Hollywood Reporter, “my 10-year-old self is going to hate me if I don’t do it.” Now she, too, has become the hero she idolizes.

When underrepresented groups see themselves on the page and on the screen, it can have an empowering effect. Just ask Ms. Vellani. But until recently, the most well-known on-screen heroes in capes, spandex, and armor have largely been white. (Well, perhaps not the Hulk.)

Now, Hollywood is starting to break the mold. A number of upcoming movies include people of color with superpowers. The film industry is belatedly realizing that there’s an audience demand for iconic characters who reflect today’s multicultural society. One yardstick of how much things have changed: J.J. Abrams is producing a Black Superman movie written by journalist and author Ta-Nehisi Coates.

Credit comic books for being first to create diverse superheroes – including LGBTQ characters – who can now be adapted to the screen. Advocates for cultural pluralism in storytelling say that diverse superheroes can offer valuable insights into other people’s experiences. But, some add, the traits that make superheroes universally relatable are the underlying flaws, moral conundrums, and insecurities that speak to all of us.

“It does matter that people who are at the margins see themselves as being participants in the center of building and creating and being heroic in this world,” says Adilifu Nama, author of “Super Black: American Pop Culture and Black Superheroes.” “It gives [audiences] an opportunity to at least challenge their ... notions of what diversity can be, should be, and they can take actual joy in the diversity that they bear witness to. It doesn’t always have to be an imposition.” 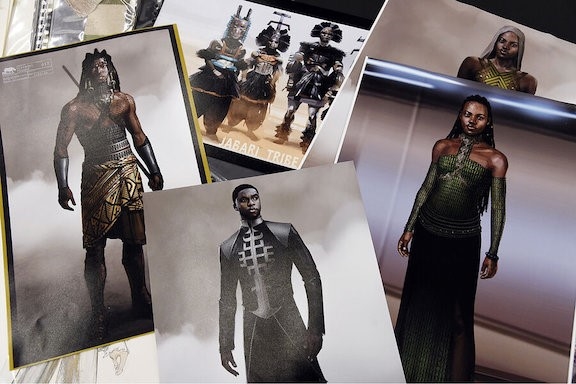 Chris Pizzello/Invision/AP/FileRenderings of fashions created by Ruth E. Carter for “Black Panther” are displayed in Los Angeles in 2019. Ms. Carter, who returns for the upcoming sequel “Black Panther: Wakanda Forever,” won an Oscar for her costume design work in the first film. She was the first African American to win in that category.

In 2018, “Black Panther” disproved Hollywood’s conventional wisdom that a Black superhero film wouldn’t have worldwide appeal. Now, many more like it are in the works. The success of “Black Panther” opened the door for Marvel movies with Asian leads, including “Shang-Chi and the Legend of the Ten Rings” and “Eternals.” Puerto Rican rapper Bad Bunny will soon star as Marvel’s first Latino superhero in the movie “El Muerto.” And this fall, the formidable biceps of Dwayne “The Rock” Johnson will stretch the spandex supersuit of the DC Comics character Black Adam.

In Hollywood, money speaks loudest. A UCLA study of English-language movies released in 2021 found that people of color had a significant impact on box-office revenue, especially on opening weekends. But that’s not the sole reason the film industry is trying to increase diversity in front of, and behind, the camera.

“Hollywood executives don’t want to be embarrassed anymore,” says Tim Gray, awards editor of features and senior vice president for Variety. “When #OscarsSoWhite started that movement, I think it was January 2015 when the Oscar nominations came out, it was like a wake-up call. It’s like, ‘Look, people are watching you and people are going to hold you accountable.’”

When it comes to diversity, comic books have often been out front. After all, in the United States, Stan Lee and Jack Kirby created the first African superhero, Black Panther, back in 1966. Other Black icons such as The Falcon, Blade, and Luke Cage followed in the Marvel universe soon afterward.

“The consumer now has to deal with a new type of Black person – a Black person that can fly, not a Black person that says, ‘Yessir, boss,’” says Dr. Nama, who is a professor of African American studies at Loyola Marymount University in Los Angeles. “They are symbols of racial reconciliation. Because these are Black superheroes who ... do not fight to save just one particular racial or ethnic group. They are here to serve and save humanity. So they speak to a type of ethical and moral expression of equality.”

Kwanza Osajyefo, a writer who has worked at Marvel and DC Comics, independently released an even more radical comic story. “Black” imagines a society where only Black people have superpowers. A highly anticipated sequel, “White,” released in 2021, was inspired by the racial tension of Trump-era politics.

Mr. Osajyefo told the Monitor that new and refreshing stories are emerging from artists within the uplifting and tightknit Black comic community. He hopes that the future of Black storytelling is one that includes youth, especially those underserved in economically unstable communities.

In recent years, famous characters in print have also been recast as different racial identities – sometimes as alternate versions of superheroes. For example, the alter ego of Silk, who has powers similar to Spider-Man’s, is a Korean American teenager named Cindy Moon. Amadeus Cho, an Asian nerd, transforms into the Hulk-like Brawn. Riri Williams, a genius 15-year-old Black teen, makes her own version of an Iron Man suit to become Ironheart. Riri will make her big-screen debut in November in “Black Panther: Wakanda Forever.”

New iterations of icons such as Green Lantern, Batwoman, The Flash, and Superman: Son of Kal-El have also come out as gay, bisexual, nonbinary. 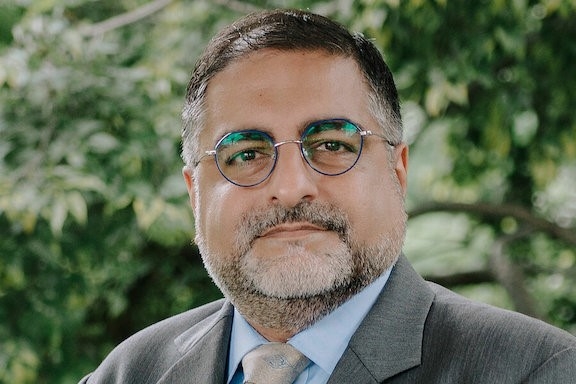 Aidan Loughran/Courtesy of Hussein RashidHussein Rashid, co-editor of “Ms. Marvel’s America: No Normal,” a book of essays about the comic book character’s impact on culture, says the specificity of the character’s story as someone with a Pakistani heritage offers a realism that draws people in.

Susan Kirtley, director of comics studies at Portland State University in Oregon, says that some fans, attached to the characters they grew up with, express racism, sexism, and homophobia about revisions to characters. “There was a lot of pushback when a female picked up the hammer and became the new Thor. ... There’s a couple of great scenes [in the comics] where the new female Thor is fighting against a character called Absorbing Man. It was really delightfully on the nose because Absorbing Man was acting like one of the [internet] trolls,” she says.

The inclusion of previously underrepresented identities in comic books reflects how the industry has changed. An increasing number of the writers and illustrators behind these creations are female, LGBTQ, and people of color. Sometimes, their creations are meant to provoke political or cultural conversation. In a 2014 comic, the Falcon inherited the role of Captain America. That storyline carried over into the movie “Avengers: Endgame” and the subsequent TV series “The Falcon and the Winter Soldier.”

On the small screen, TV networks and streamers have experimented more with appealing to niche audiences – with mixed results. The Ava DuVernay-helmed “Naomi” on the CW, about a Black teen, lasted just one season this past year. Netflix’s “Raising Dion,” from Michael B. Jordan (“Black Panther”), about a mom raising a Black child with superpowers, was just canceled after two seasons.

“Ms. Marvel” is an example of a story that reflects its roots. The character lives in a New Jersey neighborhood similar to the one that co-creator Sana Amanat, a Pakistani American, grew up in. Ms. Amanat and writer G. Willow Wilson wanted to challenge stereotypes of Muslims and also tell a story about someone defying labels and categories to find their true self. As if to underscore that Kamala is no conventional superhero, her costume features a silk scarf – reflecting her Pakistani heritage – rather than a cape.

The universality of “Ms. Marvel” stems from the fact that Kamala’s story isn’t a generic tale of how teens often clash with their parents, says Hussein Rashid, co-editor of “Ms. Marvel’s America: No Normal,” a book of essays about the comic book character’s impact on culture. It’s the specificity of her story as someone with a Pakistani heritage that offers a realism that draws us in – and also reveals that some broader human experiences are common to every race and ethnicity, even if the particular manifestations are different.