#ShareMyCheck: Why Americans are donating their coronavirus relief checks

In an era of hardship and layoffs, Americans are countering fear with compassion by pledging to share their checks. The movement underscores the power of generosity – immune even from a pandemic.

MAY 13, 2020 - Fresh out of cosmetology school, Jennifer Guy was glad to start work as a hairdresser in late February. But she lost the job three weeks later as Pennsylvania closed to COVID-19. The single mom and cancer survivor from McKeesport says she hadn’t worked long enough to file for unemployment. Her two teens at home needed food. 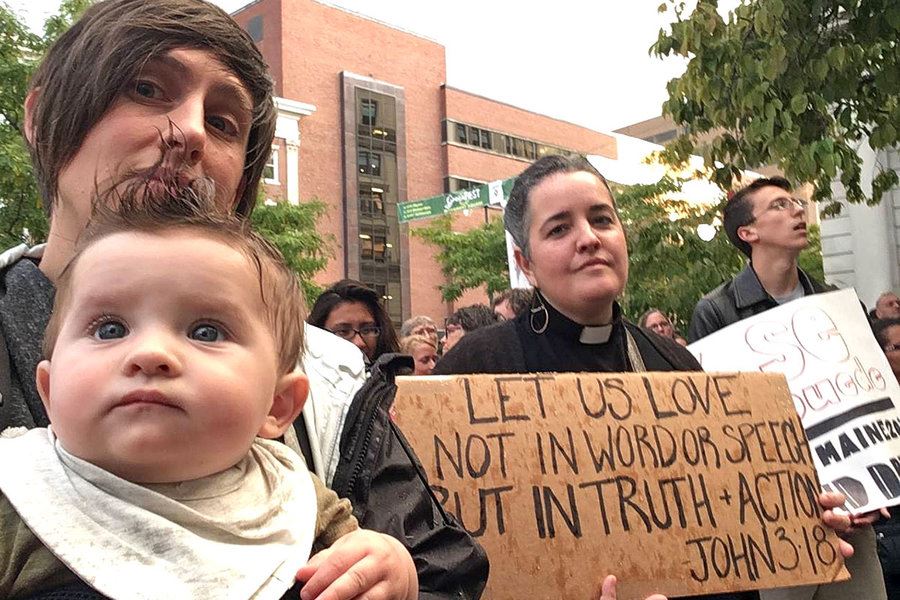 Ms. Guy didn’t know where to turn – until a news story on a local Facebook group caught her eye. The Stimulus Check Exchange support group seemed nonjudgmental, she says, so she posted about her struggle.

Two days later, a check signed by a stranger appeared in the mail for $250.

“It actually was a blessing for me,” says Ms. Guy. “I really was starting to lose hope” of getting help. She says the check went toward rent, food for her kids, and a book for each from Walmart.

In an era of fear and layoffs, Americans across the country are pledging to pay it forward. Some taxpayers say they plan to redistribute their checks to organizations or neighbors in need. As they brace against the virus, communities countrywide prove generosity is immune.

“This is not my money, this is our collective money,” says the Rev. Tamara Torres McGovern, co-founder of the #PledgeMyStimulus campaign in Portland, Maine. So far 151 individuals have pledged more than $122,000.

“This virus has created fear of other people,” she says. “This is a really simple way to kind of push back against that fear and [move] towards compassion.”

The coronavirus pandemic has upended the U.S. economy. More than 33 million Americans have filed for unemployment since mid-March. The Coronavirus Aid, Relief and Economic Security Act – a $2 trillion package to help businesses and individuals signed into law in March – includes one-time payments of up to $1,200 for individual taxpayers. As of May 8, some 130 million Americans have received their checks, according to the Treasury Department and the IRS. 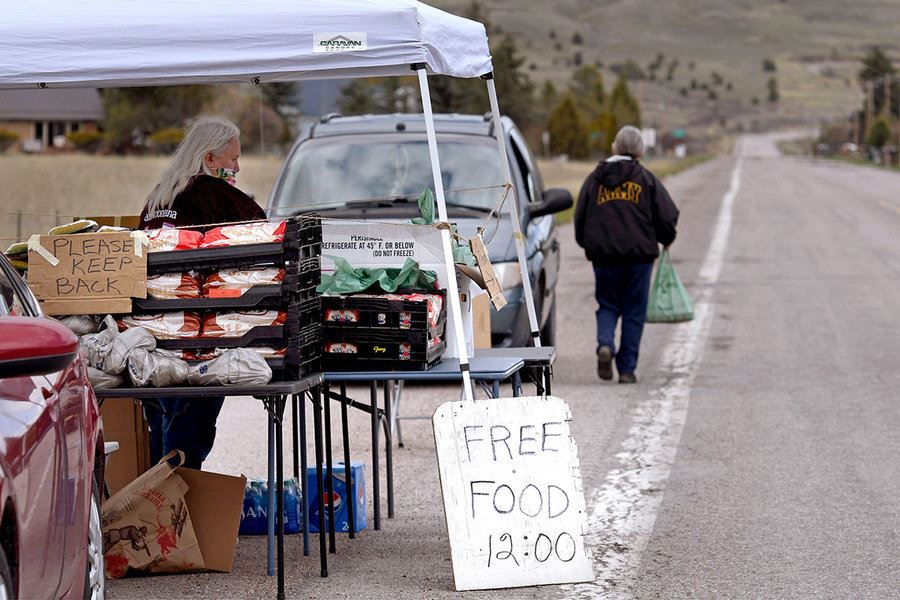 Nancy Hausermann, who said she lives on $700 a month and spent her entire $1200 stimulus check on food to give away to those in need, tends to her makeshift free food stand after giving a bag full of groceries to a passerby on Rocky Point Road near Polson, Montana on April 24, 2020.Kurt Wilson/Reuters

Not all taxpayers benefit. The current legislation excludes unauthorized immigrants, though many work “essential” jobs. In response, a GoFundMe by a coalition of advocacy groups has raised more than half a million dollars for immigrant families around Washington, D.C.

“It has become ever more clear that we need systems that serve everyone, especially in times of crisis, and not just those with saved or inherited wealth or well-resourced jobs,” writes Yahya Alazrak, campaign director for Resource Generation, in a statement to the Monitor.

Resource Generation organizes young adults with privilege around social justice causes. The nonprofit’s #ShareMyCheck campaign is meant to inspire donations for individuals, communities, and organizations in need during the pandemic.

New York grant writer Jason Yoon took to Twitter last month with the #ShareMyCheck hashtag. Grateful for a steady income and bank account, he says sharing his check with others was a “moral imperative.”

“I’m personally frustrated that so many workers and laborers are being excluded from federal aid,” says Mr. Yoon. He divided his check among two immigrant empowerment groups, a community arts studio where he formerly served as executive director, and his current employer, Sakhi for South Asian Women, which aids survivors of gender-based violence.

“My parents are immigrants from Korea. My mother is a retired nurse [who worked] in New York City,” he says. “So seeing the experience of front-line workers, and the work of women in particular in this moment, is something that hits home for me.”

Local news has chronicled a range of giving inspired by relief checks. Hundreds of educators in California are committing their incoming cash to support unauthorized workers. A Boise, Idaho, man’s donation to a local food bank encouraged others to follow. And an Alabama math teacher paid three students’ utility bills.

“As this pandemic unfolds, the silver lining really has been the outpouring of generosity and support,” says Una Osili, associate dean for research and international programs at Indiana University’s Lilly Family School of Philanthropy.

Philanthropy has been “part of America’s fabric from the very beginning,” says Dr. Osili. “Compared to a lot of European countries, we don’t have a lot of government programs for those in need,” she says. “Private philanthropy plays an important role.”

It’s hard to gauge how many will act charitably with their checks. Early evidence suggests most are putting the money toward basics like food and bills. An April Gallup Poll found only 3% of U.S. adults plan to donate to charity.

Nonetheless, research has found that U.S. philanthropy persists during dark hours. In the wake of several natural disasters, nearly a third of Americans made a disaster-related donation in 2017 and 2018, according to a study by Dr. Osili and colleagues. Most donate to disasters “over and above their regular patterns of charitable giving,” she notes.

More than 650 funds in the United States have been set up to bolster nonprofits during the pandemic, according to Candid, an organization that tracks global philanthropy. Yet despite an influx in institutional giving, the pandemic poses challenges to nonprofits. Many face increased demand for services amid social-distancing mandates. Others struggle to fundraise – especially since spring is a major fundraising season.

“On the whole, nonprofits are suffering,” says Jen Bokoff, director of stakeholder engagement at Candid.

Torres McGovern says several people have used #PledgeMyStimulus to pledge their checks to Maine Access Immigrant Network (MAIN). The Portland nonprofit led by former refugees has been applying to foundations’ emergency funds during the pandemic as its staff faces growing demand.

“Our workload has tripled, and not the funding,” says Sarah Lewis, who helps run MAIN.

One bright spot has been the prospect of donations from the #PledgeMyStimulus campaign. “It brought tears to my eyes,” says Ms. Lewis, learning of others’ desire to help. “We’re only as strong as our most vulnerable population. And if we don’t lift everyone, who are we?”

Good at the core

“My goal was just to make connections,” says Ms. O’Connor, who has helped 22 individuals like Ms. Guy receive assistance. Ms. O’Connor says she and her husband had originally planned to put their checks toward buying a house – before an epiphany struck.

“There’s people so much worse off that are struggling right now,” she says. After receiving their checks last week, the pair has bought a washer and dryer for a single mom, and plans to help another family fix their roof.

Torres McGovern, of #PledgeMyStimulus, says her check could easily go toward household repairs, or the combined $130,000 student loan debt she shares with her spouse. But the couple is putting half their checks toward causes that include support for immigrants, low-wage workers, public radio, and domestic violence prevention, as well as a faith community where she works part-time. The other half will benefit local businesses.

Editor’s note: As a public service, we’ve removed the paywall for all our coronavirus coverage. It’s free.