As the practice of “social distancing” burgeons during the coronavirus crisis, people are finding ways to meet heart to heart even though they can’t meet face to face.

MARCH 16 2020 - BOSTON - On Saturday morning, residents of a 30-unit cohousing neighborhood in Boston emerged from their apartments for a flash mob. Staying more than 6 feet apart, the neighbors waved to each other and joined together in singing the Beatles song “Let it Be.” One of the residents, a professional cellist, played an accompaniment for a singalong of “Lean on Me” by Bill Withers. 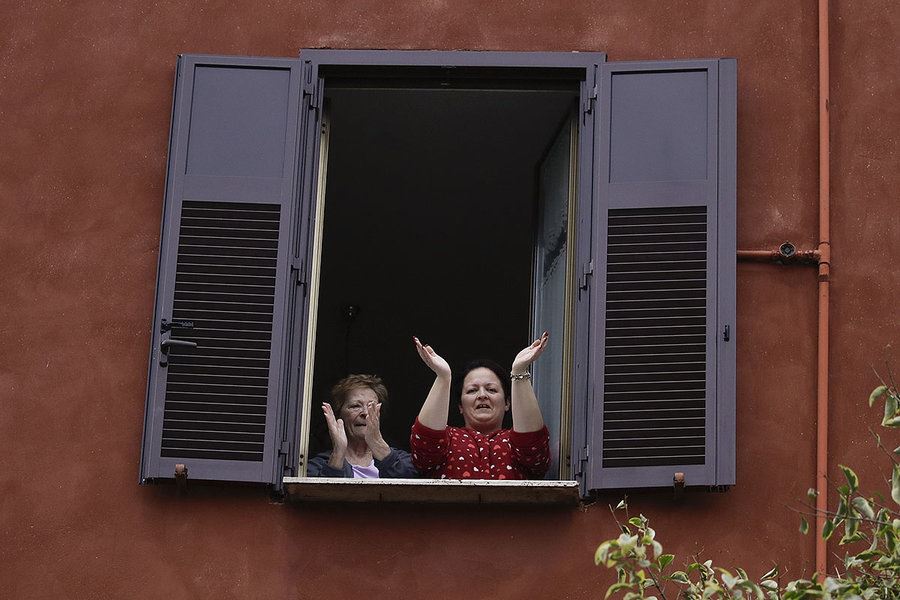 Women lean out of windows and clap their hands in the Garbatella neighborhood in Rome, March 14, 2020. Italians showing signs of solidarity with flash mob calls circulating on social media for people to “gather” on their balconies at certain hours, to play music or to give each other a round of applause.Alessandra Tarantino/AP

“Everyone appreciated the activity, which brought much-needed levity and connection during this otherwise solemn, isolating time,” resident Minda Sanchez says via email.

Similar scenes are playing out in quarantined neighborhoods across the world. In Wuhan, China, whole blocks of apartment buildings chanted, “Keep up the fight.” In Rome and in Siena, Italians on lockdown lean out of windows and balconies with tambourines and accordions to sing songs of solidarity. On Saturday night, cloistered citizens throughout Spain began clapping in unison to cheer health care workers.

As the practice of “social distancing” burgeons, people are finding ways to meet heart to heart even though they can’t meet face to face. They’re leaning on video calling and social networks to meet an innate desire for social connection. But people aren’t just staying in touch with friends and family. If anything, the global crisis has roused a sense of shared humanity that’s compelling people to reach out to their immediate communities. Amid the outbreak of COVID-19, there’s a countervailing surge of kindness among strangers.

“In times of great stress, helping others is a powerful way to reassert control in a moment where many of us feel helpless,” says Jamil Zaki, author of “The War for Kindness: Building Empathy in a Fractured World.” “Kindness toward others actually can be a great source of healing.”

One of the most common ways that millions of people are being kind to others right now is by practicing the self-sacrifice of social distancing. For many, the key motivation is that they want to protect others. There are precedents for that impulse, says Jill Suttie, a psychologist at The Greater Good Science Center at the University of California, Berkeley. A study demonstrated the most effective way for hospitals to motivate health care professionals to wash their hands isn’t by noting the importance of safeguarding oneself from disease. It’s stressing the impact it has on protecting patients.

To be sure, not everyone is acting altruistically at the moment. Fights have broken out in supermarkets as people wrestle for the last remaining item on a shelf. Some are hoarding hand sanitizer, face masks, and toilet paper. Many individuals ignored widespread pleas to practice social distancing this weekend by gathering at bars, restaurants, clubs, and music venues. In response, governors in several states, including Massachusetts and Ohio, shut down restaurants and bars except for delivery and takeout and canceled all concerts.

Kindness can go viral, too

Even so, instances of selflessness have become increasingly common. In Longmont, Colorado, The Roost restaurant and pub has offered free meals to families whose children would have relied on the closed schools to provide them with lunches. Professional basketball players such as Giannis Antetokounmpo, Zion Williamson, and Blake Griffin have donated money to cover the salaries of arena workers affected by the suspension of the season. And when Jordana Shmidman’s bat mitzvah was canceled due to the coronavirus, parents volunteered to deliver 150 boxes of the catered food to quarantined families across several boroughs in New York.

Witnessing acts of kindness inspires others to pay it forward, says Mr. Zaki, a psychologist at Stanford University in California. In 2016, he published an article in Scientific American, Kindness Contagion, that included findings of studies about how people “catch” cooperation and generosity from others. This deep-seated desire to help and connect with others intensifies during times of crisis and it crosses lanes of class, race, and other divisions that typically keep people apart.

Case in point: When Germans began retreating behind closed doors last week, Molly Wilson realized she didn’t know any of the elderly people in her Berlin neighborhood. Ms. Wilson, an American who moved to Germany in 2016, teamed up with an upstairs neighbor to post flyers on mailboxes and trash cans on their street. Their notes offered to go shopping on behalf of those who felt unable to go outside.

“My husband and I are both on parental leave, so one of us can absolutely go and get some noodles and beans for somebody who lives a couple streets over,” says Ms. Wilson. She also posted her note on Twitter to inspire others. “We need to do something off-line in order to let old people know that it’s OK to reach out for help.”

When in-person interaction is limited, technology can temporarily mend rips in the social fabric. Good Samaritans are using social media platforms to post offers to help strangers. For example, Jerry Xu, a tech professional in San Francisco, used the app NextDoor to volunteer his services. (Free to join, NextDoor connects members to others in their geographic locale.) “We can help people use apps/websites to get goods; we can help delivery with our vehicles; we can even help with medical emergencies,” Mr. Xu wrote in an email response to the Monitor.

Beyond offering a cup of sugar

To Marc Dunkelman, author of “The Vanishing Neighbor,” these neighborly responses to the coronavirus crisis are notable in their contrast to normal times. Most people’s acquaintances resemble a model like the rings of Saturn, with the innermost bands representing the most intimate connections and each successive loop becoming less intimate. Over the past 50 years, people have invested more time on the innermost ring of friends and family. People have also invested more time in the outermost rings with online acquaintances they don’t know personally but with whom they share common interests such as sports, hobbies, or politics.

People have largely abandoned those rings in the middle, says Mr. Dunkelman, a research fellow at Brown University’s A. Alfred Taubman Center for Public Policy and American Institutions. Those are the face-to-face rings of contacts, such as neighbors and once-popular associations such as bowling leagues, Boy Scouts, or Rotary clubs. Yet the coronavirus, striking close to home, offers up the opportunity for greater local connection.

“Could it be that in the context of this crisis, people do break through that initial barrier and say to one another, even though they’re not supposed to be accosting one another or having real intimacy, ‘Hello. You know, I live in apartment 2B. You must live above me’?” says Mr. Dunkelman.

For his part, Mr. Dunkelman maintains a listserv of nearby neighbors and they’re using it to stay in contact and assist each other. Some have gone further. In Massachusetts, Mutual Aid Medford and Somerville (MAMAS) has created a shareable, public Google document to connect those with specific skill sets to those in need. In addition to sharing links to helpful resources during the coronavirus, it organizes neighborhood pods of hyperlocal text message groups or phone trees since not everyone has access to online communication. Other areas have used the document’s guide on how to replicate it. In the U.K., the burgeoning COVID-19 Mutual Aid UK network is up to 87 groups and counting.

The crisis will necessarily alter the way we connect socially during the crisis. What matters most is how we interact with others, says Ms. Suttie of Greater Good, pointing to two major research papers on how emotions are contagiouswithin social circles – including online associations.

“They found that it spreads within three degrees,” says Ms. Suttie, who recommends “trying to calm each other to the extent that we can and not raise panic because that helps all of us to be a bit calmer and to see things more clearly.”

At the Jamaica Plain cohousing neighborhood in Boston, Ms. Sanchez is going to institute more sing-a-longs. On Sunday they reconvened to sing the Bill Withers song “Lovely Day.” On Monday, they sang, “With a Little Help From My Friends” by the Beatles and danced to Gloria Gaynor’s “I Will Survive.”

The activity not only brought community members to their feet to dance in the sun, it brought many to tears.

“Neighbors have already started sharing song requests with me,” she says. “Looks like we’re going to develop a playlist for community in troubled times.”