AFTER WOMEN'S MARCHES, CAN NUMBERS
TRANSLATE TO REAL CHANGE?

DENVER (AP) — Deb Szeman, a self-described "homebody," had never participated in a demonstration before hopping on an overnight bus from her home in Charlotte, North Carolina, to attend the women's march on Washington.
She returned on another bus that pulled in at 4 a.m. Sunday, full of people buzzing about what might come next and quipping that they would see each other at the next march.
"I wouldn't have spent 18 hours in Washington, D.C., and taken the bus for seven hours both ways if I didn't believe there was going to be a part two, and three and four and five," said Szeman, 25, who works at a nonprofit and joined the National Organization for Women after Trump won the White House.
"I feel like there's been an awakening," she said.
More than a million people turned out Saturday to nationwide demonstrations opposing President Donald Trump's agenda, a forceful showing that raised liberals' hopes after the election denied them control of all branches of federal government. Now, the question is whether that energy can be sustained and turned into political impact.
From marches against the Iraq War in 2003 to Occupy Wall Street, several big demonstrations have not directly translated into real-world results. In Wisconsin, for example, tens of thousands stormed the state Capitol in 2011 to protest Gov. Scott Walker's moves to weaken unions. Walker has since been re-elected.
Trump also won the state in November as Republicans increased their hold on the statehouse, part of the GOP's domination of state-level elections in recent years.
Organizers of Saturday's marches are promising 10 additional actions to take during the first 100 days of Trump's presidency. So far, the first and only is for supporters to write to their senators or representatives.
Groups scrambled so fast to arrange the massive demonstrations in only a few weeks that they have had limited time to determine how to channel the energy into additional action. But, they promise, it's coming.
"The left has really woken up and said, 'My gosh, we've been fighting the symbolic fight, but we haven't been fighting the institutional fight,'" said Yong Jung-Cho of the activist group All of Us, which organized protests at the inauguration as well as the women's march.
There's still value in symbolism. Saturday's immense crowds ruffled the new president as his press secretary falsely contended that Trump had broken a record on inauguration attendance. Jamie Henn of the climate action group 350.org said that reaction is a hint on how to build the movement.
"Size matters to this guy," Henn said. "It's like dealing with a schoolyard bully and some of us need to go back to middle school and revisit what that's like" as they think up new tactics.
Saudi Garcia, a 24-year-old anthropology student at New York University, is a veteran of Black Lives Matter protests in New York. She rode to Washington with longtime, largely minority activists to block checkpoints to the inauguration.
She was heartened to find herself in a very different crowd Saturday, which she described as largely white women, many of whom brought young children to the women's march. Garcia hopes those women stay involved in fighting Trump.
"We need to be like the tea party was in 2009," Garcia said. "Those people were relentless — showing up at town council meetings, everywhere."
Stan A. Veuger of the American Enterprise Institute, a conservative think tank, co-authored a study of how the nationwide demonstrations that launched the tea party movement led to increased conservative political clout.
Higher attendance at individual demonstrations correlated with more conservative voting by congressional members and a greater share of Republican votes in the 2010 election, when the GOP won back the House, he said.
But, Veuger cautioned, it wasn't automatic. The tea party activists also went home and volunteered in local organizations that helped change the electoral results.
"Political protests can have an effect," he said. "But there's nothing guaranteed."
One positive sign for the left, he added, was that the women's marches seemed to draw an older crowd not deeply rooted in demonstrating — people who are more likely to volunteer, donate and vote. 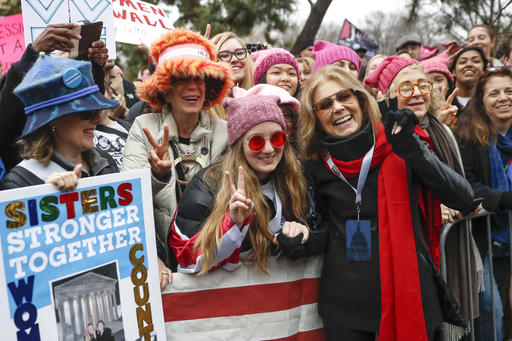 Gloria Steinem, center right, greets protesters at the barricades before speaking at the Women's March on Washington

Beth Andre is one of them. Before the election, the 29-year-old who works in crisis services at a college had bought a ticket from her home in Austin, Texas, to Washington to watch what she thought would be Hillary Clinton's inauguration.
After Trump won, she canceled the trip. She was heartbroken again when she realized that meant she could not attend the women's march. But a friend invited her to a meeting to plan a women's march in Austin instead.
Andre has never been involved in a protest movement before. Still excited after Saturday's demonstration, she's planning to attend lobbying workshops by her local Democratic Party and is thinking of running for office.
"We want to be able to harness that energy and anger that we have right now and turn it into something good," she said.
Copyright 2017 The Associated Press. All rights reserved.
This material may not be published, broadcast, rewritten or redistributed.