by Brandon M from Montvale, New Jersey in United States 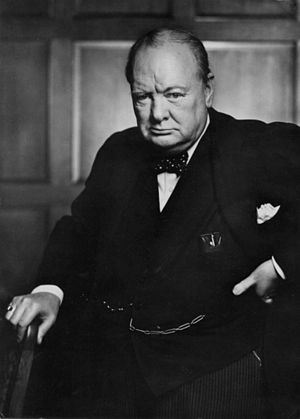 “ Never, Never, Never give up .” Those are the words of Winston Churchill. He is a hero because he led England through a very difficult time in World War ll. Churchill has had many accomplishments throughout his life. After that comes his background which leads to his impressive life.

Winston had a big background  throughout his whole life Winston Churchill was born on November 30, 1874. In addition he grew up in Blenheim Palace in England. Next Winston also had a brother named Jack. His mother and father’s names were Jenny Churchill and Lord Randolph Churchill. Winston went to four schools named Harrow School, ST. George’s, Stoke Brunswick, and Royal Military College. Finally Winston had five kids named Mary, Randolph, Diana, Marigold, and Sarah. Also his wife was Clementine and was a big part of his life.

Winston Churchill had many accomplishments throughout his life. Most importantly he became Prime Minister at one time. Then World War ll started  and he was still the Prime Minister of England. In the war it was the English against the Germans. Winston led his country throughout the war. In fact, Churchill teamed up with America and France. The reason why Winston Churchill is famous is because he was being an upstander and stood up to the Germans during the war. Therefore  the Allies luckily ended up winning the war. Winston contributed a lot to help them win.

Lastly,  those are some things about Winston’s background and his life. I hope you appreciate something new about this World War ll leader.